A nesting doll of coincidences…

Notably, Steele’s first memo contained the salacious allegation that the Kremlin was blackmailing President Trump over a video of prostitutes urinating on each other at the Moscow Ritz Carlton in 2013 in a room which the Obamas had previously stayed.

The debunked accusation has made fake news headlines for years, as propagandists such as the New York Times have squeezed as much mileage as possible out of the dossier’s absurd claims.

According to the Daily Caller‘s Chuck Ross, Danchenko met with Sergey Abyshev – who was a deputy-director in the energy ministry, as well as the editor-in-chief of a Russian finance website, Ivan Vorontsov. The meeting was documented in a Facebook post by Vorontsov, and confirmed by Abyshev.

It is unclear what they talked about – but it occurred as Danchenko was in the thick of his work with Christopher Steele, who the Hillary Clinton 2016 campaign and the DNC paid to cook up opposition research on President Trump’s campaign. The dossier was a key component of several FISA warrants issued to spy on former campaign aide Carter Page and his contacts, and was widely distributed by US media outlets in a campaign to discredit Trump.

Danchenko, a Russian national who lives in Washington, D.C., told the FBI in January 2017 that Steele, a former MI6 officer, tasked him in June 2016 to dig up dirt on Trump. Steele was hired in May 2016 by Fusion GPS, an opposition research firm working for the Clinton campaign and DNC.

Vorontsov posted a photo on June 16, 2016 from the St. Petersburg International Economic Forum (SPIEF), an annual business conclave, saying he had met the prior evening with Danchenko and Abyshev.

“The night before was so nice with Sergey Abyshev and Igor Danchenko,” Vorontsov wrote. –Daily Caller

According to Abyshev, the encounter with Danchenko was “an almost accidental meeting in the center of Moscow with three ‘cheerful’ guys,” adding “As a result, I had to listen to a lecture on investment opportunities for about 20 minutes.”

Read the rest of the report here.

So, there were some Russian contacts that possibly fed some ‘disinformation’ as rumor or not, no matter, and unaware perhaps for Steele to run with.

To what purpose, to make Steele look like a fool? They underestimate the percentage of fools and their gullibility and the people who would exploit them in America. Major faux pas. 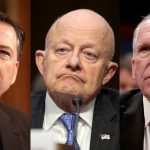