Several of my recent pieces pointed the finger at South Carolina Senator Lindsey Graham for supporting Russiagate even while being the most prominent Republican voice speaking out against the use of the false narrative against the President. Watch this video, an interview with Fox Business’ Maria Bartiromo:

Notice all those times Lindsey Graham refers to “the Russian sub-source”?

Sorry, LIndsey, the source is not a Russian. And, you know this, sir.

It is a Ukrainian-born person living in America named Igor Danchenko who was the subsource for the Steele Dossier. Gregg Jarrett has a couple pieces on this, one which we quoted from extensively in this piece, published earlier today. But here is more information, written in a Fox piece by Julia Musto:

“I could never piece it together. Because frankly…it is so wild and stupid that Steele’s source was not from Russia but — it’s a guy in Washington, D.C. working for the liberal Brookings Institution,” he said.

“Now, it sort of makes sense because the president of Brookings at the time was Strobe Talbott: [a] long-time Hillary Clinton ally who was hoping to fuel the collusion narrative and had his own contacts with Christopher Steele,” said Jarrett…

…The FBI knew who Danchenko was and interviewed him in 2017 about the information he provided for the Steele dossier that purported to show Trump campaign ties to the Russian government. Danchenko cooperated on the condition the FBI keep his identity secret so he could protect himself, the paper reported.

But that all changed when Attorney General William Barr directed the FBI to declassify the report about its three-day interview of Danchenko and turn it over to Sen. Lindsey Graham, R-S.C., whose Judiciary Committee has been investigating the origins of the Russia probe. Graham wanted the interview out because it further undercuts the credibility of the Steele dossier, he said.

Danchenko was born in Ukraine and is a Russian-trained lawyer who earned degrees at the University of Louisville and Georgetown University, the Times reported. For five years until 2010, he worked at the Brookings Institution where he obtained Vladimir Putin’s dissertation and documented evidence of plagiarism.

The video embedded in the Fox piece is a must-watch, and only this very early access prevents us from making it available in this piece. (We expect to rectify that as soon as possible.)

This is a Ukrainian-rooted man. Now, yes, it is true he was trained in Russia as an attorney. A lot of Ukrainians go to Moscow in particular for education, for work, and no wonder: Russia is more stable than Ukraine is; it has a better economy than Ukraine has; it has better and more prestigious education resources than one can find in Ukraine at present.

But that does not mean the Ukrainians love Russia. Some do, those living in the Eastern and Southern parts of Ukraine are often very must like Russians themselves, preferring to use Russian as the lingua franca and they identify with the Russian culture more than that of Kyiv and the Western part of Ukraine. Many of the people in the western regions have a curiously mixed relationship with Russia, being members of the Russian Church, but hating Vladimir Putin, and holding Russia responsible for the Holodomyr (the great famine that wiped out millions of Ukrainians, orchestrated by bad policies from the Communist Party), and they see no dignity for Ukraine unless it is utterly free of Russian influence.

It is important to understand this, especially for our American readers, who may not understand this dynamic at all. I honestly do not understand it, why it is so strong or deep, but I do understand that it exists, and that it is significant enough to make policy choices. We saw Petro Poroshenko try to bring the country to a fever of fear of war with Russia during the last several months of his term. This lawyer, Igor Danchenko, appears to resent Vladimir Putin a great deal, enough to make his alleged plagiarism a topic of his work. We can probably assume he has it in for Russia.

Senator Graham knows this!! He knows all of it, but he keeps using “Russian sub-source” in his discussion with Bartiromo. Why?

Well, for one, The Intercept reported in 2015 that Senator Graham received almost $3 million in support for his campaign from defense contractors. They look to him to keep the military budget high and keep them in the money for their pet projects. Russia is a much more formidable adversary than Ukraine is. Speculation? Yes. However, it is logical speculation. Graham is similary “strong” on issues with China as well. He is a defense hawk and he makes no secret of it.

Having the number of significant adversaries drop from two to one is probably not in Mr. Graham’s own best interests.

In this, we see an example in plain sight, of a man “in the know” distorting information for his own benefit.

President Trump had better be watching his back. This hawk wants to keep his power and he may turn on Trump now that the Russiagate hoax is being blown to bits.

“this article… hones in on the duplicity of Lindsey Graham”

As Lindsey sold all of his decision making powers to the highest bidder,
he has no ability to be anything, or do anything except read from a script.

Indeed. Magicians often pull the hat trick from their repertoire but Congressional sorcerers like to pull the hate trick. Quite disgusting and yes, downright evil. No other way to put it.

DEMOCRACY NEEDS TO GO
The bottom half of society, the 50% working-poor, if they are the ones who refuse to vote, surely the 25% most wealthy have always been the voting majority and democracy is the root cause for all corruption in government.

As far as Congress goes: “We are all CIA” AKA “We were all trained in the fine arts of lying, stealing and cheating’.

Ukrainian Russ is where Russia begins. Ukraine is Russia. The only part of Ukraine that is not fully Russian is the Western Ukrain, the Lviv region. That is the source of the anti-Russia propaganda and most of the violence. They are the ones who cooperated with the Nazis in WWII. As for Holodomor, that is Western propaganda. Recall the the US had the Great Depression at the time, plus NAP in the USSR allowed farmers to sell abroad starving people in the USSR, not just in Ukrain.

According to Western Ukrainian historians, the Kievan Rus left Scandinavia travelling the Baltic and North Seas, the Atlantic, the Mediterranean, the Black Sea and up the Dnieper to settle Kiev, then later moving on to Novgorod, which is only a few hundred miles from Scandinavia as the fish flies. When asked why they would take such a circuitous route to reach Novgorod when it was right next door to Scandinavia, the Ukrainians pondered a few minutes, scratched their heads and blurted out: “They like to travel?” Now you know why David Duke was able to get a PhD so easily… Read more »

Well, Mr. (?) Never Mind, there are a LOT of Ukrainians who presently disagree with you. And regardless of the history of the region, this disagreement is driving policy in the region now, or we would have no issue. Much of present-day Ukraine thinks of itself as European, and the other half thinks of itself as Russian.

I cannot solve that problem, but I can point at it, and where it impacts American policy, Ukraine is seen as the “good guys” and Russia, the “bad guys” – hence, the problem.

Like Trey Goudy, Graham is a faker and a liar. He does nothing, just spouts off. All hat, no cattle. Lindsey. Bust a move.

Lindsey Graham is a closet Gay, lives with his mother and is not married. He has a Control File being held over his head by the Deep State so he does their bidding. 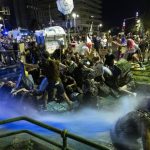