Patrisse Cullors resigned from Black Lives Matter in May this year following revelations that this self-professed Marxist had been quietly building a property portfolio to rival Donald Trump’s. Unfortunately, like Black Lives Matter, she hasn’t disappeared but has been posting videos on her YouTube channel.

Earlier this year, Black Lives Matter uploaded a three part video by Cullors to YouTube. Called Imagining Abolition, it has to be said that if the information herein is correct, and it appears to be, in her youth she was far from the certifiable lunatic she is today, but she has clearly lost her way big time.

The criticisms she makes of the police and the criminal justice system are likewise not without merit, but the “solutions” she proposes are recipes for chaos.

For all her criticisms of Uncle Sam and her whining about privilege, she concedes that she herself  is privileged; her American passport gives her “a ton of privilege”,  though best not to mention Afghanistan, but here she is in her video of November 8 in which she talks about what she calls the five most common myths about abolition, meaning the abolition of both the police and prisons as well as the courts and surveillance. Actually, she talks around the subject but never explains precisely how the first three can be abolished. Should surveillance be abolished?  Obviously not totally, it has many uses besides spying on people for the sake of it. For example,  it brought to book Jussie Smollett along with many a rapist, murderer and terrorist. How many lives have been saved during fires and natural disasters on account of some sort of surveillance?

So what does Cullors say about the police and prisons? Abolition is about “imagining and dreaming a brand new world”.

Without the police we hold people accountable by “transformative justice”. Let’s see how that would play out in Dreamland:

Dylann Roof murdered nine people in a mass shooting. He is currently on death row. Roof is white and all his victims were black. What sort of transformative justice would take him off death row and put him back on the street?

Terry Blair is a black serial killer who murdered at least seven women, all of them black. By waving his right to trial by jury, Blair escaped the death penalty; he is currently incarcerated in his home state of Missouri. How would the criminal justice system have to be transformed for Blair to be released?

One more example will suffice; Chris Watts murdered his pregnant wife and two young daughters.  He too escaped the death penalty. What would transform him from a monster into a decent citizen again?

So-called transformative justice can work, though only for less serious crimes, and when the perpetrators are young, it can be a positive thing, but not for murderers, terrorists, violent psychopaths, those who are prepared to kill, maim, destroy, plunder for their own enrichment or entertainment.

The pablum spouted by Cullors will be familiar to students of Marxism. The promise is the transformation of Man; once socialism has been achieved, the all-powerful state will simply wither away, we will all hold hands and sing Kum Ba Yah. Does Cullors believe any of this, what do you think? 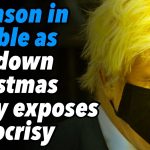