The Black Lives Matter crowd have been strangely silent of late, probably because the wanton destruction they and their supporters inflicted on especially the United States has finally sunk in. The origin of this organisation is well-documented, but few people in the media see the reality behind the rhetoric, so let us look at a few of their recent news releases in not quite reverse chronological order to see where they are really at.

Statement Regarding the Ongoing Trial of Jussie Smollett

“In our commitment to abolition, we can never believe police, especially the Chicago Police Department (CPD) over Jussie Smollett, a Black man who has been courageously present, visible, and vocal in the struggle for Black freedom. ”

This is no longer ongoing of course, but how about believing two black men – the Osundairo brothers – who were roped into an absurd criminal conspiracy by the well-connected, wealthy and privileged Smollett then traduced on the witness stand?

“Black Lives Matter will continue to work towards the abolition of police and every unjust system.”

Hmm, did Jussie Smollett want to abolish the police that cold January night, or use them for his own, nefarious ends?

Last year there were said to be 614 billionaires in the United States, and only seven black ones, but there are too many black multimillionaires to count, especially in the fields of entertainment (principally music), sports, and increasingly, business. Capitalism doesn’t “love” anybody, it rewards those who best serve the public, even in ways that does the public a disservice, that includes a number of high profile con men in religious garb, and Patrisse Cullors.

“We are not shocked. Today’s not-guilty verdict is expected when white supremacy lives and breathes within our institutions. It is a reminder of how our legal systems are deeply rooted in white supremacy.”

Perhaps if they had watched the trial they would have been even less shocked, they might not even have accused Kyle of murder. Though if they’d watched one of his first interviews they might have been surprised to hear him say he supported Black Lives Matter – the slogan if not the organisation.

“Today is George Floyd’s 48th birthday. He should still be here today, celebrating with his friends and family.”

Actually, if George Floyd were still alive today he would probably be in prison. Like all governments, Uncle Sam takes a dim view of those who forge his currency or try to pass fake notes. Floyd as good as acknowledged this in his own words.

And we have saved the best for last:

Honoring the Legacy of Dr. Huey P. Newton and the Black Panther Party

Heck, they sure do find some strange heroes to honour.  The doctorate was honorary, by the way, an honorary award for a man without honour.

In 1994, the black journalist Hugh Pearson published an excellent biography of Newton, but the following facts are indisputable if seldom mentioned when speaking of this lowlife.

Huey Newton was born in Louisiana but spent most of his life in California, Oakland in particular. He was named after Huey P. Long, the famous Governor of Louisiana. His parents can’t be faulted for that.

It was in Oakland that Newton first demonstrated his love for the black man by stabbing one. This was at a party in 1964, and Odell Lee was unarmed. In spite of stabbing Lee more than once and defending himself in court,  Newton was sentenced to a surprisingly lenient six months but whined “A jury of my peers would have understood the situation and exonerated me”. So white jurors were not his peers, his inferiors, perhaps?

Three years later, Newton shot and killed police officer John Frey. In spite of Frey being hit no fewer than four times, Newton was convicted only of voluntary manslaughter receiving a sentence of two to fifteen years, but this conviction was reversed and a retrial was ordered. Newton would eventually walk, but as Pearson points out, he would later boast to his circle that he had gotten away with murder.

Later, he did get away with murder, shooting teenage prostitute Kathleen Smith.  Newton died at the relatively young age of 47; his Wikipedia entry says he was assassinated, but in reality he was murdered while on a mission to scrounge on steal cocaine. Ironically, he had picked up a drug habit from his white liberal friends. And they erected a statue to this guy at the same time they were tearing down the statues of truly great men?

So this is what Black Lives Matter is really all about, this and a particularly bizarre form of racial Marxism. Best give it a miss, if you haven’t already; there is nothing here to help ordinary, decent blacks, as many, like AK Nation, are beginning to realise.

Israel Cohen “A Racial Program for the Twentieth Century” >Published in 1912. “We must realize that our party’s most powerful weapon is RACIAL TENSION. By propounding into the consciousness of the DARK races, that for centuries they have been oppressed by Whites, we can mold them to the program of the Communist Party. In America we will aim for subtle victory. While inflaming the Negro minority against the Whites, we will endeavor to instill in the Whites, a guilt complex for their exploitation of the Negros. We will aid the Negroes to rise in prominence in every walk of life,… Read more »

That quote is a fake; it was invented by Eustace Mullins. I interviewed him in 1993.

I am aware that the Jews claim that this is a hoax, as i am similarly aware that the Jews claim that the Protocols of the Elders of Zion are also a hoax, but they are the masters of the Hoax, with their Holohoax.  That book existed and was even in the British museum. The Protocols is definitely real.   Here is a summary: 0 Place our agents and helpers everywhere 1 Take control of the media and use it in propaganda for our plans 2 Start fights between different races, classes and religions 3 Use bribery, threats, blackmail, lies and… Read more »

Again, the quote is a fake:

They will also tell you that the The Kalergi Plan, by Richard von Coudenhove-Kalergi, is also an Antisemitic Hoax.  But The Kalergi Plan is happen right in front of our eyes today.  “The man of the future will be of mixed race. Today’s races and classes will gradually disappear owing to the vanishing of space, time, and prejudice. The Eurasian-Negroid race of the future, similar in its appearance to the Ancient Egyptians, will replace the diversity of peoples with a diversity of individuals. […] Instead of destroying European Jewry, Europe, against its own will, refined and educated this people into… Read more »

Even if the writing “A Racial Program for the Twentieth Century”, which was attributed to Israel Cohen, is a fake, it matter little, as the Zionists have been using the broad text of the quote, as a blueprint, which has been used against the American people, from at least the time it was first read, 64 years ago.  If it is a Hoax writing, then it was the most Prophetic hoax ever, as almost everything in the writing has came to pass, and the remainder is sure to follow, after the successful 2020 Bolshevik Coup d’état on the United States. … Read more »

Black lives matter unless they are Palestinians. 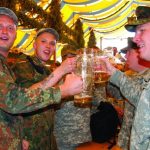