One of the claims parroted tirelessly by America’s race-hustlers is that the criminal justice system is rigged against black defendants, including the use of all-white or predominantly white juries.

In the UK, juries are typically selected within minutes unless the trial is likely to be very long; in the United States, jury selection can take days, and sometimes specialists are brought in by the defense to help select or exclude certain jurors. In capital cases, all jurors must be at least willing to consider the death penalty, but exclusion of jurors based on race is forbidden. There is even case law on this, Batson v Kentucky, (1986).

The supporters of murderer and serial rapist Rodney Reed make a big thing of this, as do many others, but is there any credible evidence that all-white juries are less reliable than others? The answer is no. Typically, race-hustlers cite the case of Emmett Till, way back in 1955.

This saw two white defendants cleared of murdering the fourteen year old in Mississippi. The evidence that they were complicit in the murder if not the actual killers was overwhelming, but how typical was that case?

In 1959, boy soldier Fred Davis was convicted in South Carolina of raping a black woman. He claimed the victim consented, but as he was 19 and she was 47, that sounds unlikely. An all-white jury took an hour and ten minutes to convict him but did not recommend mercy. Davis wasn’t executed, and in 2008, the Supreme Court finally outlawed the death penalty for rape in total.

In 2015,  Daniel Holtzclaw (pictured) was convicted by an all-white jury in Oklahoma. Holtzclaw, who is half-Japanese, was a sexual predator in uniform who preyed on black women, not because they were black but because they were at the bottom of the food chain – drug addicts and the like. When he made the mistake of assaulting an older black woman who was driving her own car, she reported him, and his goose was cooked. Holtzclaw was convicted on 18 of 36 charges; the jury also decided his punishment – 263 years in total.

What though of black defendants? Well, Huey Newton, co-founder of the Black Panthers was unhappy with a sentence of a mere six months claiming “A jury of my peers would have understood the situation and exonerated me”.

It is doubtful if the black man he stabbed multiple times would have agreed. That stabbing by the way was the least of Newton’s crimes.

Similarly, Angela Davis never stops whining about racism, but in 1972, she was acquitted by an all-white jury way against the weight of the evidence. 1972 is half a century ago; are we supposed to believe all-white juries are more bigoted now than then?

What though is a Bronx jury? This is a euphemism popularised though not invented by Colin Flaherty. It means a black or predominantly black jury that refuses to convict a black defendant. There is more than one reason for this; one is the mnemonic “Snitches get stitches”, something that is very real, the recent Kim Potter trial saw attempts by radical black activists to intimidate the judge. Indeed, there were similar attempts to intimidate the jurors in the aforementioned Holtzclaw trial; the antics of some protesters were used as part of the grounds for his unsuccessful appeal.

In 2017,  a female juror refused to convict Marlon Sewell of vehicular manslaughter because she would not “send a black man to jail”.

In Florida, where murder can be capital, at least three jurors refused last month to convict Dayonte Resiles for the 2014 murder of a woman he stabbed to death while burgling her home after tying her up.  Instead, they convicted him of manslaughter; the judge rightly refused to accept the verdict, and there will be a retrial. Resiles has been in custody for several years; in 2016, he escaped from a courtroom and was unlawfully at large for six days before being recaptured.

Far, far worse than even this is the case of Kenyan immigrant Billy Chemirmir who was charged with no fewer than eighteen murders in Texas, the death penalty capital of America. He was arrested in March 2018 after a 91 year old woman survived an attempt to smother her with a pillow.  In November, a jury refused to convict him of one sample murder in spite of overwhelming evidence. One juror is said to have held out though it isn’t clear if this person was black, or as AK Nation would say, a pasty liberal. 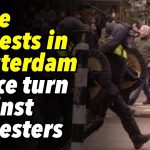