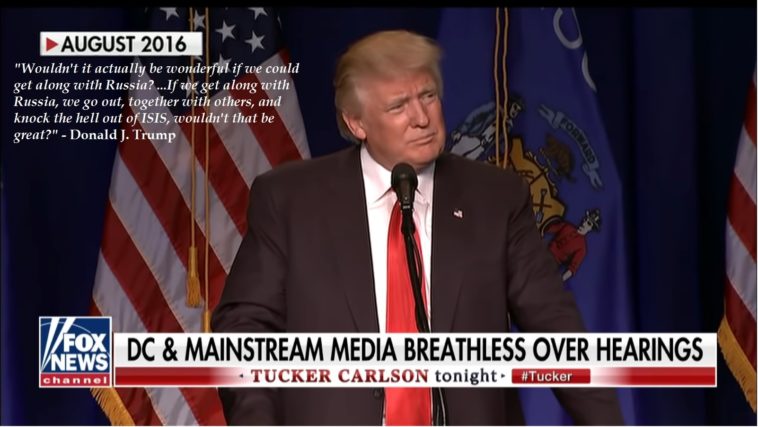 Finally, we now know why the Democrats and the Deep State and the Establishment in the US government want to get rid of President Donald Trump. He wants to get along with Russia. Tucker Carlson lays it out using the statements laid out in the first public hearing of the Compleat Fake Impeachment Inquiry.

This is the biggest “see, I told you so” in my own efforts to cover what appear to be two different stories, but which are actually just two sides of the same attack:

In several recent pieces we have covered some of the movement in the Eastern Orthodox Church, with two jurisdictions apparently caving in to pressure from the US State Department and the IMF to acknowledge the legitimacy of the Orthodox Church of Ukraine (OCU) a new structure composed of schismatics and anathematized clergy, which is on record for violent assaults on the canonical Ukrainian Orthodox Church, because that church is a (highly independent) exarchate of the Moscow Patriarchate. In recent days this effort by the US State Department seems to have achieve two rapid capitulations in short order, with Georgia and now Serbia in the crosshairs.

This whole thing – the effort to impeach Trump and the effort to legitimize a schismatic group that is already expected to be a conduit for LGBTQrstuvwxyz propaganda, drug legalization, and every secular humanist / globalist ideal in Ukraine, an Orthodox and Uniate Catholic country that is still highly traditional – is an effort by the US powers that be to isolate Russia.

Several high-ups in the US government clearly state their opinion that a secure Ukraine is vital to the struggle against “a newly aggressive Russia.”

As an attack goes, this one is cunning with its own level of genius, because the combination of ignorance about Russia, Ukraine, and the Eastern Orthodox Church and the almost total complicity and use of the American news media as a propaganda distribution network leads many Americans to support this view, simply because they do not hear any other information and hence, do not know any better.

President Trump makes it clear why he advocates for better relations with Russia. It is very clear.

Russia is the strongest power in the Eastern Hemisphere. Its culture and values are the most similar to that of the traditional American views (before the era of the liberal snowflake). It is a Christian nation, and it is unabashedly so. Russian and America together aligned would make two-thirds of the military power in the world, with China being the final third.

China is not a military enemy, but it is a nation which also defines itself the way it wishes. Ideally, of course, a three-way cooperation would probably be the world’s best hope for extended peace.

But this is undesirable by many people. Peace is not profitable to them. After all, if the great powers work together to solve problems in the world, there is likely to be much less war. That means much less weapons production is required, and that means less money to those whose business is war. Although I am no great believer in the doctrine of the “military-industrial” complex, there is certainly an argument that can be made for its existence with this bit of thought.

Further, the realignment of the world to an order that is defined and guided by true Christian principles is very undesirable to that group of cultural Marxists that have scored success after success in the West. They have made the United States a cesspool of homeless drug users defecating on the streets, a powerless domestic government, chaos and fighting over whether or not the US should even be sovereign within her own borders. They have glorified and legalized perversion, and aggressively acted to promote it to our children, despite the wishes of their own parents.

The same thing has resulted in Western Europe, and with the influx of massive numbers of Islamic migrants into places like England and Sweden and Germany, and the curious “protection” of these groups who institute Shari’a law in their ghettos even though it is brutal and against the constitutional laws of these nations.

The Europeans are beginning to get tired of it. We see this in the activity of Brexit in the U.K., the ascent of Matteo Salvini in Italy, Victor Orban’s campaign to block pro-homosexual advertising in Hungary, and of course, Russia is holding the line as an Orthodox Christian nation, rapidly building new churches and adorning its cities with statues and monuments to saints, and even instituting holidays in support of the traditional family, with Saints Peter and Febronia as patrons.

These secularist globalists are determined to push their agenda, and the only two powers strong enough to fight it are President Trump and his supporters, and Russia.

There you have it, folks. Now we finally know.