Are you a conspiracy theorist? The answer to that question should depend on the conspiracy concerned. In 1605, there was a conspiracy to blow up the English Parliament, the so-called Gunpowder Plot, which failed. Last month saw the twentieth anniversary of one of the most audacious and deadly conspiracies in history, the one in which nineteen Islamist fanatics hijacked four American planes and…you know the rest. These and many other conspiracies, some involving large numbers of players, are real, but what of Satanic conspiracies, specifically, what about conspiracies which involve the sexual abuse of children, even their murder?

These are possible, certainly sadistic murder and plain child murder do happen. But what about a conspiracy that involves countless powerful politicians, businessmen, social services, members of the judiciary, and your local police department? This is where most conspiracy buffs and all rational people draw the line. Rational people does not include Wilfred Wong.

On March 22, 2002, the London Daily Telegraph published an article The people who believe that Satanists might eat your baby… Yes, the Daily Telegraph, not the Sunday Sport. This was a report on a conference chaired by a peer of the realm no less, at Westminster. One of its organisers was Wilfred Wong.

Nearly two decades on, Wong is still a true believer in Satanic abuse, Satanic ritual murder, and Satan knows what else. Or Satan would, if he actually existed.  In March last year, it was reported here that Wong had been given space to spout his nonsense by empty suit Shaun Attwood, who has had his own troubles recently, but he was never in  danger of losing more than his YouTube channel and a reputation he doesn’t deserve. Earlier this year it was reported that Wong had already lost his freedom, albeit as a remand prisoner, when he decided that the best way to rescue a young boy from Satanic abuse was to kidnap him from North Wales and take him to France. Because we all know France is the one country in the world where Satanic abuse doesn’t exist.

Alas, Wong and his co-conspirators were thwarted by Satanic police officers. Or maybe they were simply ordinary police officers who exclaimed “What the Devil is going on here?”

The full sad, sorry story has been related by a number of mainstream media outlets, and also by Wong supporters on YouTube and elsewhere. Their insane ravings will not be linked here. Suffice it to say that after a four week trial at Caernarfon Crown Court, one woman was cleared of conspiracy to kidnap, three women pleaded guilty to conspiracy to kidnap, one man appears to have committed suicide in prison, while Wong and two others who had pleaded not guilty were found guilty in August. They were due to be sentenced on September 29, but this was delayed until October 1; Mail Online reports on the sentencing, but caveat emptor – Wong’s age is given as both 56 and 51.

While all this talk of Satanic ritual abuse are indeed insane ravings, nonsense, and a host of other things, they are also dangerous. Sabine McNeill, an otherwise admirable woman, is currently serving a nine year prison sentence because in spite of her stratospheric IQ she allowed herself to be seduced by all manner of similar garbage in the form of the Hampstead Satanic abuse hoax. As thing stand, she will be eighty years old when she is released. Innocent men and women the world over have had their lives destroyed because at times hardened and cynical police officers have been taken in by such fantasies. Fortunately, in this case there was never any chance of that happening, but child kidnapping from whatever misguided noble motives can and must warrant heavy punishment.

Wilfred Wong has been chasing the great Satanic conspiracy for decades. How many of these fiends has he brought to book? How about none? It could be they are so clever or the conspiracy so all-encompassing that they have so far evaded capture. Or it could be he has been wasting his life. He should ponder that for the next seventeen years or whatever time he serves before being paroled. And the fact that the only real conspiracy that has ever been uncovered in his proximity is one in which he was himself a major player.

What is this man smoking for Gods sake .Of course there are sadistic child molesters out there preying on our kids.
Where the hell are all the missing kids, and in Canada there is a huge scandal involving murdered and missing indigenous women.
Come on ,a bit of sense is required here from the editors.

This guy doesn’t do journalism, he does hit pieces. Total, unmitigated and unsupported crap, as usual.

TheDarkMan doesn’t do journalism; he does research. There are plenty of real government conspiracies and official cover-ups out there without pushng these lurid and dangerous fantasies, or didn’t you notice the guilty pleas?

Evil is easy to dismiss if it is described as a halloween costume. Evil acts are committed every day by human beings. Such behavior can be addictive and as such increasing evil acts are needed to satisfy the addiction. No need to have supernatural being in charge. There are many among us who see themselves as superior beings; and they are addicted to power. Victim can be a trusting child or a deceived nation.

I don’t know about Wong, but the Hampstead crime to me seems to be a cover up, certainly Dutroux (27 murdered victims during trial) was one, nor was the Kincora Connection a hoax, not Larry King and others… 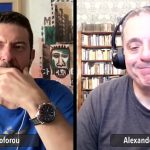