Speculation is very dangerous, and this piece is speculative “news”. However, it is also real information about what is going on that explains why President Trump is not conceding the election. To cover it accurately as possible, we include two videos.

The mainstream media is not covering this, but The Epoch Times and Steve Turley both are, as are several other independent sources, like the Liberal Hivemind and Finance Hub channels on YouTube. We present two videos here. The first is from Dr. Steve Turley noting the possibility that Mike Pence may refuse to accept the falsely certified votes coming from Arizona, Pennsylvania, Michigan, Wisconsin, Georgia… in other words, the states in which the election is being contested by the Trump legal team. If he does this, and it appears that he can according to Constitutional provisions, then Trump has a path to victory almost outright. He may do it todayor any time before January 6th. The report, to be sure, stipulates that Wednesday, December 23 was the day this should have taken place, and regrettably, the report was filed on Thursday the 24th (Wednesday evening in the US – one wonders how that happened – wink, wink, Big Tech.) However, the fact that the report exists may indicate there is still the option that Mr. Pence could take this action.

The second video also describes this situation from the viewpoint of Roman Balmakov of the Epoch Times.

Is this a long shot? Personally, I think it is. Logic is indeed on Trump’s side. Truth is on his side. The election is not an honest one; anyone seeing the hearings about this cannot resist the data as it is extremely consistent.

The real test here is one of courage. Mr. Trump has it. Does VP Pence? Do the other members of Congress who wish to contest this matter? Will they act in light of the truth or cave in to political and peer pressure?

The MSM reaction (silence) tells us what their expectations are. Indeed, were it to be that VP Pence does strike the election down as illegitimate, the MSM will have blown real scoop material because they will have to catch up after forty days and more of reporting “move along; nothing to see here…”, a move that will surely inflame much of the nation to violent rioting.  This certainty is likely what cows many GOP people who would otherwise support the challenge. The problem is that their going along with the Democrats and their pressure will only lead to the GOP’s destruction as a political party. The Trump supporters are extremely energized and they will not forgive such a sellout.

This is the gamble, I believe, that most of the GOP has taken – they think this will be forgotten if. They. Would. Just. Stop. With the. Election. Challenges. However, Trump is driven by something higher – the fact that this election’s results were arrived at in a conniving and dishonest manner, one which could plunge the nation into deep jepaordy. For the President and his supporters, this cannot be allowed to pass.

What is being witnessed is greed & lust for power poised to crush integrity and patriotism…..an age old battle in which the stakes couldn’t be higher. The founding fathers predicted correctly that human nature wouldn’t change over the centuries and so they developed mechanisms within the constitution to mitigate humanity’s weaknesses and protect their vision. What they couldn’t predict was the technology that would be brought to bear against their Republic, especially the information superhighway that has so empowered propaganda that truth has been lost in its weeds. Donald Trump won this election…..the maths tells the story unequivocally. Those denying… Read more »

Another credulous fool regurgitating lies from the insane conmander in chief. Benighted and oblivious to his delusion and megalomania. As Augustinian said, the truth is like a lion you don’t have to defend it. Let it loose. It will defend itself..
Fifty court cases later where facts and the truth under oath have clearly shown that there is no credible evidence of fraud. A reasonable person should have faith in the judicial process yet are easily fooled by a despotic mythomaniac.
Stop drinking the koolaid being supplied to the cult worshippers.

As Augustinian said, the truth is like a lion you don’t have to defend it!And the people are good,and love conquers, and all people are equal,and if you didn’t do anything wrong, you shouldn’t be afraid,and Bill Gates is saving the world from hunger!

No one is letting the truth loose. Not one minute of coverage on any of the proven fraud. It’s overwhelming. Regardless of the censorship, you are correct, the truth is slowly being let loose and is beginning to defend itself. Even the Dominion machines that were audited proved thousands of votes in each of three counties went back to Trump. Expert forensics proved that it was not human error. https://www.youtube.com/watch?v=necl0mknEVY All but 3 to 5 of those court cases were not filed by team Trump. They were filed by citizens and state officials. None have been heard on their merits.… Read more »

Tiberius, I would normally be inclined to agree with you – I despise and usually do not waste my time with “conspiracy theory” sort of thinking (which is odd, since I write for the Duran – (It is okay to laugh here)), but I have watched the presentations directly and they are not just idle rumours made by sore losers (though some might be). There is a legitimate problem here with fraudulent voting and that why President Trump is basically stuck in the position of having to pursue it – because for him, this is a matter not just of… Read more »

If you believe that sleepy Joe Biden won over 10 million more votes than Obama in his pomp, it is you who’s the credulous fool.

Actually you should stop drinking the koolaid. There has been numerous hearings about the fraud, it’s real. I love how these morons spew no evidence. Open your eyes you blind fool!

No credible evidence under oath. Gullible fools mesmerised by an insane megalomaniac. The whole system is corrupt there is only one party the Republicrats. The President is owned by the billionaire donors and is a puppet to the permanent government. Considering that congress is zionist occupied territory with Israel Firsters, president Trump is the best president Israel has ever elected.

Sure “Pantera”..and that’s why the Jewish owned media has done nothing but harangue and harass (including impeachment proceedings) Trump for 5 years in order to get him out. That’s very reminiscent of Nixon (Watergate wasn’t the reason [[they]] wanted him gone, Ford (2 assassination attempts), Carter (a 1 term president), Clinton-Lewinsky-Mossad ‘scandal’, Bush 1 (a 1 term president) and now Trump. What is the common denominator for these 1 term presidents? They were all aware of the Zio power running the U.S. and were all trying to get a peace plan in that crappy little country in the mid-east formerly… Read more »

Fifty court cases later where facts and the truth under oath have clearly shown that there is no credible evidence of fraud. False. The Court cases that have examined the evidence, such as the recent Supreme Court of Wisconsin that agreed the Executive Branch had no authority to loosen the rules around mail-in ballots, have been successful. That ruling puts all of the Wisconsin mail-in ballots at risk. Other court challenges have been dismissed (as in the State of Texas lawsuit) claiming lack of standing, and others have been dismissed on technical issues, without examining the evidence. The judicial system… Read more »

How’s the weather in Herzliya, Shlomo?

You wankers can’t see the forest for the trees, can you. IF, and it’s a big IF, the dump gets to overturn the election and stay on as potus, how long do you think he will remain? He and ponce will be assassinated and then guess who becomes interim potus? Scrotum face pelosi. A DUMBOCRAT!They win, one way or another. Then, retardistan will fall into anarchy and civil war, ripe for the deep state to take over completely. Fools.

Get a grip on reality “Bob”. None of that will happen. They killed JFK (shock and awe in broad daylight) and they tried to kill Ford a couple of times, but it DOES get a bit obvious when the Js try to do it one too many times. They use other methods like impeachment, hotel break-ins and sex scandals to get their way as well. There is so much dirt on Pelosi that can be used if it becomes necessary, she’ll never have the chance at the Presidency.

Pence is an opportunist. He languishes praise and religion to deceive his targets. He is a low-life career politician like JoeBiden…. a real leach. 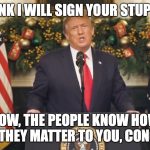