A psychosis is forming in America and in some other places around the world as the result of COVID-19’s ongoing mutations and waves, but more, because of the way the governments of these countries and their information media are driving the situation. For perhaps the first time in the COVID crisis, in the United States a tipping point has become evident, where many people have developed a “knee-jerk” sort of reaction to any sense of physical ailment – to go get a COVID-19 test.

Watch as our esteemed and very smart Dana Perino of Fox News talks about her own participation in this craziness without even realizing the shift in her own reactions that has happened:

DANA PERINO:  …I have two vaccines, I was boosted; I also got a flu shot. I spent the whole entire week of Christmas as sick as can be. I’ve taken two negative rapid tests, one positive test, and then a negative test in order to come back to work. This is no longer just about the unvaccinated; we are ALL suffering from it…

And, seen on social media from another friend:

“I have a very not exciting cold. Sinus congestion, cough, sore throat. All the fun stuff. I tested twice for Covid. Negative, despite the fact that we have an outbreak of it at work…”

We also have the reports over the last several days of massive flight cancellations and delays due to inability to test passengers for COVID before they board planes. Yet a third friend of mine was just delayed three days leaving the US because of this, and this happened in Florida, probably the freest state in the Union right now with regard to COVID regulations.

We have seen a truly massive spike in recognized infections, indeed, over one million positives were recorded in the United States on January 3rd. At the time of this writing (January 6th, 2:24am New York Time), Drudge is reporting 885,541 new positives.

But for contrast, in Russia yesterday, the country reported 15,772 new cases nationwide, and this is part of a long downtrend. Omicron has been detected here, but the overall response to it seems to be a yawn. It may spike here, of course, but it hasn’t yet: 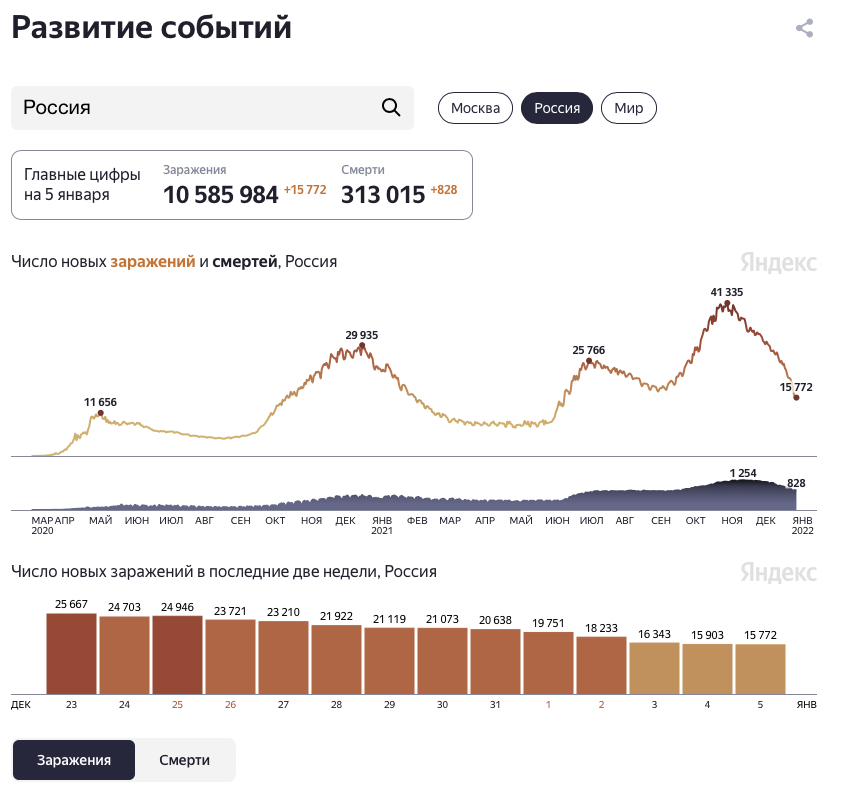 The big thing that is different is that the reaction of most people I know in Russia (and most of the media outlets) is very minor. Some people are vaccinated, most are not, and the pro-vax screamers in the government are noted and summarily ignored by most people.

Consider the amount of panic that is in even Dana Perino’s talk – double vaxxed, boosted and FOUR tests in a very short period of time? The other person having a cold and taking a covid test twice? Why wasn’t once enough, or even better, what about “it’s a cold!” and leaving it at that?

Why the airport madness, the crime waves and so on? These are just not happening here. It is not the same.

There appears to be a definition for what we are seeing. The term “Mass Formation Psychosis” got brought into the public sphere over the weekend, and it does seem to adequately describe what we are seeing from otherwise reasonable people. Both Perino and the person on social media are very logical and reasonable people – not given to wild liberalism and emotional jags. Yet they are riding the waves of this the same as the insane liberals who are pushing much of this fear-laden agenda across the news networks.

This excellent report by Kim Iversen from The Hill explains the what and why of this phenomenon.

A Mass Formation Psychosis comes when what might be called “groupthink” is so strong that people begin doing horrific things, like mass suicides, or genocides, like in Nazi Germany or the early Communist pogroms. For the psychosis to occur, four conditions must be met:

As described in the video (these conditions are described starting at the [01:25] timestamp), it is clear that worldwide, the solution being pushed is vaccination. This is true – there are very few nations where the push is less insistent, and thankfully, Russia is one of these. But in the US, look at what Brandon is saying “the problem is that it is a pandemic of the unvaccinated” when it is very clearly not the case, as vaccinated people are picking up the coof and spreading it just as much as unvaccinated people.

Now, let’s look at Dana Perino’s response again, because she says something very remarkable, though the casual listener will miss its significance. This is at timestamp [02:21]

“[Brandon] is not sitting outside waiting for three hours waiting for a test, and we’re depleting our small supply of tests by testing everybody, who don’t even need a test. The other thing that I am  going to take exception to is when he said that ‘this is a pandemic of the unvaccinated”…

“… Now, I am vaccinated; I am glad I am, because I do feel protected from serious illness or hospitalization or even death. That said…”

and then the comment quoted above earlier about her own taking of FOUR tests.

This flies right in the face of her comment that many people don’t need to be tested. Yet, she, vaccinated, took four.

Notice also, her words “I am vaccinated; I am glad I am, because I do feel protected from serious illness or hospitalization or even death.”

I have heard this statement, almost verbatim, from so many people both in the media and personal friends alike. Anybody reading this piece might ask himself if he has also been hearing the same line. Again, almost word-for-word!

This suggests an absence of thought, an absence of discursive and critical thinking, but rather, groupthink. Even by conservatives, as Dana herself definitely is.

What is going on here? Why are so many people repeating this text like it is a mantra? And it is absolutely bizarre because it does not square with what is actually taking place. At this point, with “omicron” spreading like crazy, but apparently not causing crazy severe illness or death, there is a break between narrative and reality.

It is worth us beginning to think for ourselves.

I broke away from reporting news for a while because I realized that I was caught up in the storm as well, choosing my own confirmation bias and running with it. I probably still am, as my bias remains unchanged. But taking some time away from writing about COVID allowed me to shut my mouth and open my ears and eyes to see if maybe I got some things wrong. In some ways, I have been wrong. But my perspective on the virus and vaccination has apparently only grown sharper, for I was not able to recognize the hypnotic line mentioned above for what it was, even though I was hearing it all the time.

It is difficult to think for oneself, if that thought stream is outside the cultural norm around us. This is not an insult, it is a fact. It is the reason I am able to understand the doings in America more clearly while living in Russia, because my surrounding context is so different it allows me to see my home fishbowl a bit more “from the outside”, or “the big picture”. The fact that I am not absorbed in Russian society and culture beyond my family, who also is disinterested in popular culture here, gives a chance at clear perspective. When in the United States, I often feel the sense that I am “losing touch” with reality, because all the airwaves and speech around me is infused with the same thoughts up close.

For what it is worth, I see a problem. This Mass Formation Psychosis seems to have taken shape in my home country, and it is no wonder there are so many increasing problems. It is very sad to watch. Hopefully any Americans reading this piece will be able to make the exercise of standing “outside the stream” just a bit, so they can see it, recognize it in themselves and change direction.

Otherwise we are all lemmings, rushing for the cliff’s edge.

This article cites anecdotes in order to answer what are actually statistical-scientific questions that can SCIENTIFICALLY be analyzed ONLY on the basis of studying and scientifically sampling a large-enough and sufficiently random SAMPLE of the total population so as to become enabled to discuss the matter scientifically. In other words: This article is ONLY for stupid people who don’t understand even the first thing about the way that science is done.

True, but science is not the point of my piece, Eric; the point is the lack of personal evaluation and critical thinking and the spread of mindless propaganda. Now, of course, since the piece was published, Omicron broke out here big time, I got it along with my whole family and that presented its own tons of fun. Nevertheless, what has been called “science” throughout this pandemic by the media outlets *everywhere* is more propaganda and less honest than what truly scientific investigation into COVID would have brought, which would probably have been at the very least “We don’t know… Read more »

statistics are easily manipulated to fit the desired result & it’s done more often than not… it’s naïve to believe everything at face value & discount the possibility of a disingenuous agenda trying to control the narrative… the only question is did the fascist fauci financed flu commie cold escape or was it released intentionally?… 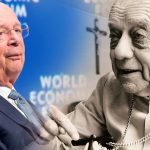