If you aren’t familiar with that phrase, it is the title of a book published in the 1980s by the French TV producer Alain Joubert.

Long before any of us had heard of cancel culture, governments, the media, and at times powerful pressure groups erased people from the public space, and from history. Of course, it isn’t possible to totally erase people from the archives, not yet anyway, but the way things are going…

Some people are not unhappy about being forgotten. Child killers Robert Thompson and Jon Venables were granted lifelong anonymity – lifelong and worldwide – to protect them from mob justice. Thompson has vanished into the ether; alas, Venables threw away chance after chance, and at some point he will almost certainly reappear, if some recent insane decisions by the Parole Board are anything to go by.

In the realm of politics, the two photographs above show how the Soviets erased people from history. Leon Trotsky received similar treatment, and was eventually murdered in Mexico by a Stalinist agent.

Although he hasn’t quite been erased from history, Marcus Garvey is all but forgotten nowadays, primarily because he was a racial separatist who advocated black financial empowerment rather than the ludicrous black power of the later 1960s. The claim by  Malcolm X that the worst enemy of American blacks was the white liberal was simply a restatement of something Garvey said four decades earlier. Like many controversial political figures, including Donald Trump, Garvey was accused of financial fraud, and in his case, it stuck, something it most likely wouldn’t have done had he been an integrationist rather than a segregationist.

Someone the enemies of freedom would dearly like to erase from history is Edward Colston, though to date they have succeeded only in tearing down his statue.

Who today has heard of either Major Douglas or Dave Roberts, two men who were dispatched to the memory hole for entirely different reasons? C.H. Douglas was an engineer by profession, and the greatest economist of the Twentieth Century. Like the inventor Arthur Kitson, he was one of a handful of men at the time to see through the banking scam. Douglas went further, pointing out that leisure was preferable to work, and that with the exponential leaps in technology that are now here, hunger, want and poverty can be eliminated, if only we can break the monopoly of credit. Douglas died in 1952, a neglected and embittered man.

Thirty years later, Dave Roberts died, or to give him his full name, Richard David Roberts. While we hear so much rubbish about white supremacy in the United States nowadays, in the late 1970s, Britain was said to be in the grips of a Nazi conspiracy. The Column 88 Nazi Underground hoax was concocted by Roberts and his paymaster Maurice Ludmer. At one point it was said to have a secret army of four hundred dedicated fanatics who could bomb, maim and murder with impunity. Alas, as far as Column 88 existed, it was a small group of men living out their Walter Mitty fantasy by celebrating Hitler’s birthday, doubtless with a cake baked in a swastika design.

Maurice Ludmer died in 1981, and Roberts who died young the following year; Roberts was quickly forgotten,  but the great British Nazi conspiracy was quietly rebranded a honeytrap organisation controlled by British Intelligence. Indeed.

One living person who has shamefully been written out of history is Erin Pizzey, who set up what is believed to be the first ever women’s refuge, at Chiswick, London in 1971. Pizzey was born in Communist China, the daughter of a diplomat. From her own experience as much as her researches, she concluded that much so-called violence against women was two-way. This didn’t go down at all well with second wave feminism, nor does it with the current crop of third wave feminists who believe men are the root of all evil and women can never do wrong. If you think this is hyperbolae,  check out the case of Emma-Jayne Magson, or some of the insane claims made about Jodi Arias, Aileen Wuornos and Karla Homolka.

Erin Pizzey was recently interviewed by Posie Parker on her YouTube channel; she is another woman many feminists would like to see the back of, for some reason.

I love the photo showing Stalin displaying the hidden hand. The hidden hand is what we can feel at work today; events being orchestrated, but by who? The wolves are amongst us and their masks are slipping. 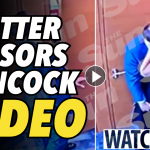