Kim Kardashian is best known as the ex-wife of musician and businessman Kanye West. And as the daughter of a lawyer who helped secure the acquittal of acknowledged double murderer O.J. Simpson. She may not have the musical talents of her (third) ex-husband but as far as the law goes, the apple didn’t fall far from the tree.

She is said to be a dollar billionairess. Whether or not she is that wealthy, she clearly doesn’t have to work for a living, and if she has too much time on her hands she could ask her chauffeur to drive her the 35 miles or so from her new $70 million Malibu home to Los Angeles where she can volunteer to work with the homeless. Instead, she has chosen to advocate not for those lowest on the food chain but for those lowest in humanity. After passing a law exam at the fourth attempt she has started a law podcast in which she argues for the innocence of people who have been convicted of murder on overwhelming evidence.

Kardashian’s legal advocacy actually started well before that. She was one of those who successfully argued for the release of Cyntoia Brown. If you read certain websites, and especially if you listen to many pundits on YouTube, you will hear all about how Cyntoia Brown was a victim of sex trafficking, how she was drugged, beaten and abused before finally killing her rapist in self-defense.

If on the other hand you study the legal judgments and official findings of fact, you will learn the truth, namely that Brown was a rebellious teenager with a violent streak who shot a man in the back of the head as he lay sleeping then robbed his home. The gun she used was one she carried in her purse, just like sex trafficking victims do. Not.

Which of the above pictures of Cyntoia Brown is the one promoted by Kim Kardashian?

Odious though Brown may be, Rodney Reed is beyond redemption, and though his lawyers have succeeded in halting his execution indefinitely, there is no way he will ever be released. Reed is a serial rapist who murdered a young woman in 1996. The evidence against him is absolutely overwhelming, including forensic evidence. His case has been championed by the Innocence Project, whose actions bring disgrace on their profession. Kardashian was with Reed in 2019 when he learned of his indefinite stay of execution. Shortly after this, she sat down with a starry-eyed blonde reporter. If Reed had the chance he would choke the life out of these two gullibles while sexually violating them, but neither seemed the slightest bit aware of that. They should ask Linda Schlueter what she thinks of Reed; she is the courageous young woman who fought Reed off when he tried to kill her too.

Kardashian’s latest worthless cause is Kevin Keith who murdered three people in 1994. Like Reed, he was facing the death penalty, and like Reed he should have been executed years if not decades ago but again, clever lawyers gaining the system were able to get him off death row in 2010, but for some people that isn’t enough. According to Kardashian, there is no physical evidence tying Keith to the crime, a triple murder. Hmm, what about the three surviving victims? Last month, two of them spoke to Cosmopolitan, something Kardashian never did.

A YouTuber who goes by the name Actual Justice Warrior has covered this case and the other antics of Kim Kardashian in depth. Check out his channel if you have time, but give her podcast a miss.

The person in question and this IS NOT FAKE

The Eloi will adore her one day. The Morlocks will lament that they never got to taste her flesh. 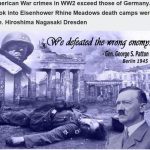