As reported weeks ago — in mid April Dr. Fauci admitted that it was he and Dr. Birx who persuaded President Trump to lock down the US economy knowing the massive destruction this would cause in jobs, lives and commerce.

President Trump: The big projection being that 2.2 million people would die if we did nothing. That was another decision we made, close it up. That was a big decision that we made. Two very smart people walked into my office and said listen these are your alternatives. And that was a projection of 1.5 to 2.2 million people would die if we didn’t close it up. That’s a lot of people.

Dr. Fauci later admitted he persuaded the president to shut down and kill off the US economy.

This guy has been wrong every step of the way.

Sheri Fink at The New York Times back on March 16, 2020, described the scenario that led to the US economic lockdown. 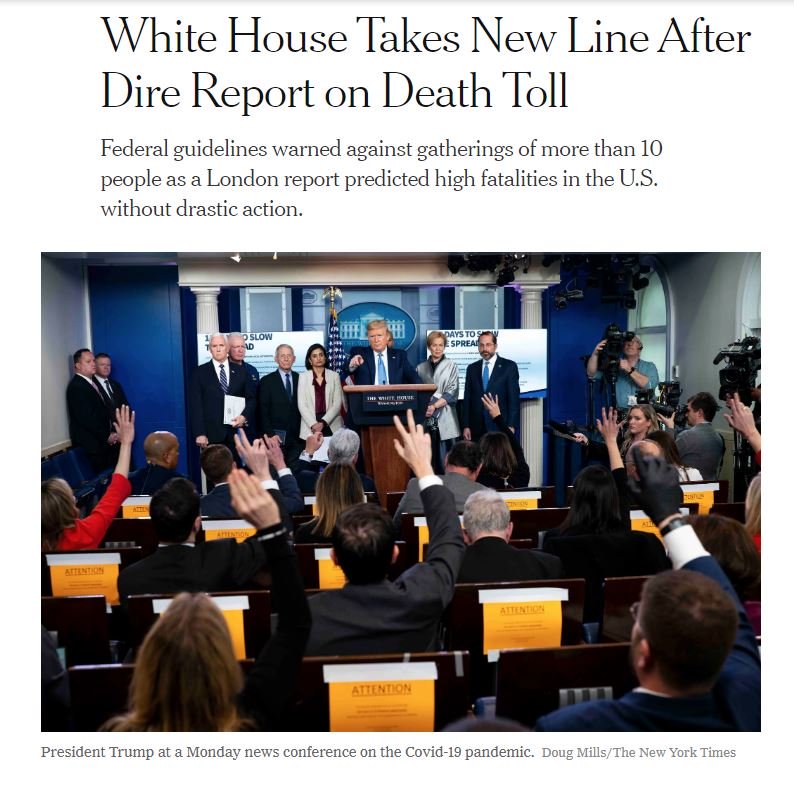 In her report Fink describes how Imperial College researchers including Neil Ferguson shared their projections with Dr. Fauci and Dr. Birx and the White House coronavirus task force.  They even sent a copy of their report to the task force before its release.

Sweeping new federal recommendations announced on Monday for Americans to sharply limit their activities appeared to draw on a dire scientific report warning that, without action by the government and individuals to slow the spread of coronavirus and suppress new cases, 2.2 million people in the United States could die.

To curb the epidemic, there would need to be drastic restrictions on work, school and social gatherings for periods of time until a vaccine was available, which could take 18 months, according to the report, compiled by British researchers. They cautioned that such steps carried enormous costs that could also affect people’s health, but concluded they were “the only viable strategy at the current time.”

That is because different steps, intended to drive down transmission by isolating patients, quarantining those in contact with them and keeping the most vulnerable apart from others for three months, could only cut the predicted death toll by half, the new report said…

…Asked at a news conference with President Trump about what had led to the change in thinking by a White House task force, Dr. Deborah Birx, one of the task force leaders, said new information had come from a model developed in Britain.

Dr. Birx’s description of the findings was consistent with those in the report, released on Monday by an epidemic modeling group at Imperial College London. The lead author of the study, Neil Ferguson, an epidemiology professor, said in an interview that his group had shared their projections with the White House task force about a week ago and that an early copy of the report was sent over the weekend.

The group has also shared its fatality estimates with the C.D.C., Dr. Ferguson said, including that eight to nine percent of people in the most vulnerable age group, 80 and older, could die if infected.

After Dr. Birx and Dr. Fauci sat with the president the US went into lockdown and since that time over 30 MILLION Americans have lost their jobs and thousands of companies have gone bankrupt.

In late March, Neil Ferguson, who was behind the Imperial College coronavirus study, backtracked and said 20,000 Brits may die from the coronavirus instead of his original estimates of 500,000.

Neil Ferguson resigned from his government post as researcher this week after he was caught breaking his own lockdown rules by meeting with his married mistress at his home.

And now Sue Denim, a software engineer for 30 years, studied the Dr. Ferguson’s model and concluded it is complete garbage and cannot be scientifically replicated.

In her concluding remarks Denim says the Imperial College model “should be retracted immediately.”

Conclusions. All papers based on this code should be retracted immediately. Imperial’s modelling efforts should be reset with a new team that isn’t under Professor Ferguson, and which has a commitment to replicable results with published code from day one.

On a personal level, I’d go further and suggest that all academic epidemiology be defunded. This sort of work is best done by the insurance sector. Insurers employ modellers and data scientists, but also employ managers whose job is to decide whether a model is accurate enough for real world usage and professional software engineers to ensure model software is properly tested, understandable and so on. Academic efforts don’t have these people, and the results speak for themselves.

In conclusion: Dr. Birx and Dr. Fauci misled the White House and the American public.The economy is destroyed and over 30 million Americans have lost their incomes.

Ferguson met with his _married_ mistress. So he must have at least one other non-married mistress. Where is she/he? Or is this salacious innuendo?

poor logic. It merely states that the woman is married. Another way of saying is: his mistress, who is married. Both mean the same thing. Using the word mistress would mean he too is married.

Here is an interesting look at the connections between Bill Gates and Anthony Fauci:

With Bill Gates being one of the foremost proponents of a COVID-19 vaccine and his long-term links with Dr. Anthony Fauci who is both heading up one of the world’s foremost medical research organizations and leading Washington’s response to the pandemic, we can pretty much assure ourselves that governments will fall into line when it comes to a population-wide, global anti-coronavirus vaccination program with a newly developed vaccine.

It isn’t fraud. It is simply what happens when someone doesn’t have to answer to the financial reality of things. The good professor may have worked a lot, but he was too in love with his work and thus blind to its flaws. Flaws he created. In a commercial venture the constant string of failures would have never been allowed to mature, never mind manifest. I suggest readers here click on the source link, which is an easy to understand analysis of the reasons behind the failure of the modelling. That is what good reporting and good analysis should look… Read more »

but it could be murder!

Surprise surprise, west has been crying wolf since before 9/11. I said jail em, then, and I say jail them now. Assholes.

I just had this conversation with a dear friend, massage therapist, who is faced with the long term consequences of her income loss. I ask you: How can middle class Americans go into business ever again, when the risk calculation they make includes the question of, “what if a virus–.” What once seemed impossible is now completely possible. American business people will be strongly dissuaded from risking their homes and accumulated wealth on a business venture if there is such uncertainty. Without some assurances that something like this can NEVER happen again in America, our middle class and small businesses… Read more »

So are you saying the president just took the word of these “two very smart people” and put the entire US in lockdown and destroyed lives and the economy without looking into these two people’s connections, interests, financial ties, etc. and didn’t take this up with his advisors? Just said “OK, I guess I should trust you.” That makes no sense. Your article is ignoring that important point.