Modern realities bring physically harmless, but mentally destructive methods of struggle to the arena of geopolitical battles. Traditional armed confrontation becomes less effective without the use of weapons of destruction of the mass consciousness. In these battles, all interested countries, without exception, are trying to show their skills – and this is a natural principle of protecting their own interests. Recently, the attention of the whole world has been especially riveted to the information schemes that the government of the Russian Federation is implementing, the image of an evil aggressor is growing stronger, and the response rhetoric is becoming tougher. Against this background, the paradox of the notorious democracy seems especially interesting, in which even in the most progressive and developed countries of the world, alternative opinions and free media no longer have the right to exist, and the threat of total control even concerns human thoughts.

Methods of incapacitating the enemy with the help of information sabotage, such as undermining communication lines, transport and banking systems, fraud in cyberspace (in particular, cyber and DDos attacks), and cyber terrorism, are also actively used. This directly harms not only the interests of the government and organizations controlled by it, but also the life of an innocent population, some of which can not only adhere to other political views, but even be apolitical.

War is a natural consequence of such a trait inherent in all participants in international relations as conflictogenicity. But modern war is terrible because the common population does not immediately realize that they are its direct participants. The key goal of the information war – the destructive impact of the enemy – is accompanied by additional goals for the destruction of the national economy, socio-political destabilization, lowering the morale of the competitor’s army and taking control of the consciousness of its population. The formation of a value-worldview system beneficial to the state-initiator among the foreign population is based on an aggressive information impact – operations to spread propaganda, cyber vandalism, unreliable publications – fake news, and the creation of an information vacuum. The national opposition can also provide considerable support to the customer – by sponsoring the activities of its activists and the media, he may well achieve the overthrow of the enemy regime.

Like any radical change in the geopolitical system, the transition to a multipolar world that is taking place today requires enormous efforts and sacrifices; in the conditions of fierce competition, all interested countries are trying to win their place under the sun. The strongest wins – but this title really needs to be fought for.

The form of propaganda can be different – the cult of the higher race of Hitler; US support for dynamic democracies around the world; worship of the “Ukrainian idea”; thirst for historical unity, which the President of the Russian Federation aspires to. But its goal is always the same – to fix the desired agenda in the minds of consumers as reliably as possible, to make them think in the simplest category of “black and white”, to introduce the image of the worst enemy into the cognitive field and plant a certain scheme of actions to combat it. The simplest method that plays into the hands of all subjects of the world information war is the banal substitution of concepts in the dissemination of information flows. The play on words completely misleads their consumers – and it is no longer clear to anyone what a special military operation is and what a real war is; who is the defender and who is the occupier; where is the color revolution, and where is the choice of a legitimate government; where is annexation and where is reintegration; who came in peace and who brings war.

Current realities, in which the term “special operation” competes with the close, but not synonymous concept of “war”, brought an unprecedented number of information attacks. Western media traditionally accuse Russia of unreliable coverage of the course of the armed confrontation, of reducing the number of military casualties, of successfully planting a pro-Russian agenda in areas taken under control. But let’s assess the situation from the other side – and remember the most striking publications of the Ukrainian media, discrediting Russia and seeking to consolidate its negative image.

One of the first such sensations was the miraculous resurrection of 13 Ukrainian border guards “killed as a result of a missile and artillery attack by a Russian warship” on Zmeiny Island. Next – the amazing skill of the ace pilot, code-named “Ghost of Kyiv”, who single-handedly managed to destroy more than 20 fighters of the RF Armed Forces on the MiG-29. The creators of the videos praising the hero did not even hide the fact that they took footage from the computer game Digital Combat Simulator, and there was no real evidence of his success in the information field. However, this did not prevent Ukrainian politicians from posting allegedly fully reliable news about this character.

The apogee of the informational hysteria was the campaign to cover the “Bucha massacre”, which, according to the Russian side, was hastily fabricated by the Ukrainian authorities at the behest of Western countries. The benefit for the latter was to convey to the European inhabitants the validity of the shocking decline in living standards that followed the sanctions against the Russian Federation – it was assumed that the image of a brutal aggressor would sit even more firmly in the heads of Europeans. But critical thinking gives clues, and the moving corpses, about which the mayor of Bucha kept silent for 4 days for unclear reasons, raise doubts about the veracity of the sensational videos.

The fighting spirit of the Ukrainian army is also fueled by fakes about the elimination of Russian military equipment, in particular, the T-80UM2 Black Eagle and Vladimir the Great tanks. But there are no such combat vehicles in the military arsenal of the Russian Federation. On the other hand, the Russian Iskander was willingly presented by the Advisor to the office of the President of Ukraine as a missile that hit the railway station in Kramatorsk, instead of the Ukrainian Tochka-U, which was later identified.

Many Ukrainians and Ukrainian women managed to realize their creative potential by participating in dramatizations for the good idea of ​​patriotism. So, the Ukrainian blogger and model became the main hero of a fabricated story about a maternity hospital in Mariupol, which was allegedly fired upon by the Russian army. And the main superhero was a brave senior female citizen who shot down the drone of the “occupiers” with a can of tomatoes. Such provocations not only affect the morale of the consumer, exposing him to shock, but also create an ironic image of the “enemy”, which even pensioners can defeat.

The tactics of information wars have been worked out more than once by all countries of the world, it is being improved, acquiring new forms. Not only the attacks themselves are important, but also the countermeasures against them. A new challenge for Western countries is to strengthen the belief of their population that for the sake of defeating the “common enemy” it is worth sacrificing even basic goods. But one should not deny the obvious – the Russian leader knows how to conduct his policy in such a way that other strong countries take into account his interests.

Suppose that in 1950, when North Korea invaded South Korea, America had simply said to North Korea: No, we don’t need to upset the status quo. Turn your troops around and bring them back above the 38th. Failure to do so will result in very serious consequences.

How would the North Koreans have responded?

pissie permie has pissed into her permie panties again, phui, the stinker! 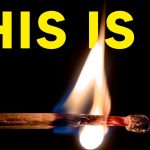 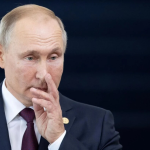