In January 1980, Paul McCartney was arrested at Tokyo’s Narita Airport after being caught with half a pound of marijuana in his luggage. This could have resulted in him spending years behind bars, instead, after nine days he was booted out of Japan unceremoniously.

Last month, the American basketball player Brittney Griner was arrested at Moscow Airport, although there appears to have been no reporting on this until March 5. She is alleged to have had in her possession a much smaller quantity of cannabis than McCartney four decades and more earlier, but with the current situation she is unlikely to be dealt with as sympathetically.

McCartney had visited Japan in 1966 when The Beatles played four shows at the famous Budokan theatre – July 1 and July 2. If you weren’t alive at that time you may find it difficult to believe how big The Beatles were and the extent of Beatlemania they generated. McCartney said his celebrity had got him out of that tight spot. On returning home he apologised to his Japanese fans. He would not return to the Land Of The Rising Sun until 2002.

Although The Beatles never played Soviet Russia, they did record a song called Back In The U.S.S.R. – a fun track which had a very un-Russian inspiration. McCartney would eventually visit Russia in May 2003 when he performed the song in Red Square. Meanwhile, Brittney Griner has nothing to sing about.

Russia’s drug laws were reformed in the first decade of the Millennium, reducing penalties, but whatever Griner’s fate, few people will have any sympathy for her, except Joy Reid, Sheila Jackson Lee, and those who signed a Change Dot Org petition calling for her to be returned to the USA. This petition describes her as “a beloved global citizen who has used her platform since her entry into the WNBA to help others”.

A previous petition describes her as a domestic violence abuser. Griner is a 6 foot 9 lesbian with tattoos all over her like a dude, she sounds like a dude, and apparently fights like one, although her 2015 altercation with her future “wife” appears to have been somewhat adversarial.

Somebody else who won’t be losing any sleep over Griner’s continued detention is Joan of Oak Forest, who wrote in the Speak Out column of the Chicago newspaper Daily Southtown:

“I don’t have much sympathy for Brittney Griner, the basketball player detained in Russia for carrying cannabis oil in her luggage. To me, she is an example of arrogance and ignorance. Many like her travel abroad and show no interest in researching or respecting the laws of the countries that they are visiting. People just automatically assume that what is legal here is legal elsewhere. Then when they get in trouble, they want to be bailed out in a jiffy because they feel that the laws and rules don’t apply to them.”

Few shopkeepers will feel any sympathy for her either on account of her being a supporter of Black Lives Matter, a bunch of grifters who along with their white fellow travellers caused $2 billion of damage during what AK Nation calls the Summer of Floyd.

She’s a dumb “jock” who like so many other jocks believe themselves to be on another plane of existence where the rules don’t apply to them and if they do they can be bent to their will. 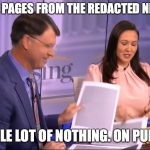