The presidential elections of 2020 gave America a triple killing blow, and unfortunately, it does not appear that enough people realize what this means.

First we have Imposter Evil Hair-Smelling Uncle Joe Biden. He is the tool by which people who are truly out to destroy America, and not only America, but to turn the very planet upside down. Mr. Biden is the perfect tool for them: He is pliant, unable to think or process information, he cannot speak without a teleprompter, he cannot answer questions in a press conference without having the whole thing gamed. We all know this, and if you are learning this for the first time, please go through the great many pieces here on The Duran, some by myself and a great many by other and better writers and speakers. Part of Biden’s even getting elected has to have been based on the idea that the people who voted for him did not know what they were really getting, probably due to MSM propaganda and their own intense biases against Donald Trump. Be that as it may, it is time to get up to speed now.

Joe Biden’s failing abilities have often been in evidence both before the election and since, but the amazingly swift collapse of Afghanistan brought about by his mechanical and stupidly handled withdrawal of American forces (“I was just following Trump’s plan!” he peevishly blamed) has brought about a sharp wake-up call to everyone in the media, both sides, and only the most delusional of Democrats are actually trying to spin this disaster in Mr. Biden’s favor.

In all of this, reports have picked up in two directions which seem at first to be opposite, but are not – they are linked.

This goes right along with rumours reporting that Evil Grandma wants to invoke the 25th Amendment proceedings against Imposter Joe and remove him from office due to him being psychologically, mentally and physically unfit to handle the duties of the presidency.

There is certainly cause to do this, as we can see.

But I am personally amazed that no one else sees the implications of this enough to get loud about it – or at least loud enough about it for me to be aware of (and I do a lot of news-scanning!)

If Joe is out, Kamala is in.

Isn’t that just going from extremely bad to devastatingly bad?

Kamala Harris in the office of the Presidency? How would that even work? This woman does nothing except preen and plot. If she gets the top office (and there is apparently every reason to presume that she wants it), what will she do? Repaper the walls while people die in Afghanistan?

What would such an honestly unliked and unlikable woman do to what is left of our relations with other leaders? For strong leaders like President Xi and President Putin, honestly not much, besides earn their derision. Both of these two men are far too real and far too serious as leaders to do much more than politely, but firmly swat this annoying nagging grandma down.

Honestly, Kamala Harris is an usurper. She wants power. However, it is unclear what she would do with it other than probably impose vaccine mandates and just annoy Americans into open and outright revolt. Maybe that would be a good thing. I certainly think that open and forceful revolt against any sort of COVID vaccine mandate or requirements to be tested or vaccinated in order to participate in life is absolutely called for. Thank God, it is already underway.

Kamala is no more sane than Biden, she is a bit younger, far more directly power-hungry and her personality is egotistical and narcissist.

But then what? Suppose Kamala also (miraculously) doesn’t take the Presidency?

By the rules of Presidential order of Succession, the seat then goes to the blithering Nancy Pelosi. Speaker of the House.

It should be painfully clear in looking at this triad of disaster what the fraudulent election of 2020 actually did to the United States: It put it in a position to experience a complete political collapse. This trifecta of America (as founded) haters, and this last one, Nancy Pelosi, actually having some real ability to wield power to this end by her own initiative, is very worrisome indeed.

Perhaps the notion of a national “Recall Election” or “Redux” might be in order. This would be very hard to do – the United States government relies very heavily on precedent, and doing this sort of thing will be considered extremely dangerous by both sides – after all, once it is done, it can be done again and again and used as a political tool, the same as happened with the use of impeachment as a weapon against President Trump during his first term.

This is the situation in a bit of a larger view. Sure, voices are screaming for Biden’s removal. That should come as no surprise; it was always anticipated that he would not make it through one term of office. But we as an electorate were short-sighted, and helped along with that short-sightedness by massive election fraud pushing us into this situation.

Perhaps the only hope for real movement on this idea is if Arizona’s forensic audit reveals that Donald Trump actually won that state. If that happens, it will cause an avalanche of other audits that are honestly quite likely to reveal the same thing. Evidence of a grossly compromised election would push the notion of a redux.

The powers that are trying to destroy the United States know this. Does it not make sense that critical subpoenas in Arizona, Pennsylvania and Wisconsin are being answered with “go spit!?” This is indeed a clever plan. Democrat / Liberal power plays making use of the general conservative nature of Americans to “not mess with the system” – it is brilliant.

It may be that none of this is being managed or controlled by any human agencies. But if it were, this would be the best plan anybody could possibly come up with. We need to pray… there is no help coming from any earthly agency for this situation.

Not eligible for POTUS-Not an Natural Born citizen!!!

Helga I. Fellay
Reply to  Earl

Don’t you know these rules no longer apply? Neither rules, nor laws, nor anything. We are back to the stone age, where might makes right. 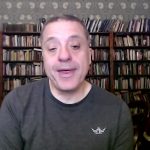