‘THE dog did nothing in the night-time,’ said Inspector Gregory. ‘That was the curious incident,’ replies Sherlock Holmes, in Conan Doyle’s The Adventure of Silver Blaze.

Another dog that has for weeks done nothing in the night-time is the New England Journal of Medicine (NEJM), along with the  Lancet one of the world’s most respected medical journals, or at least formerly so. It should have barked, but didn’t.

We reported in June how the Lancet damaged its own reputation by publishing highly influential fake news on treatments for Covid-19. This was the most extraordinary example of fabricated propaganda planted in a prestige scientific journal. It was retracted only after multiple governments (and the WHO) had changed policy on hydroxychloroquine, achieving major impact from falsehoods.

The NEJM was bound up with the same scandal, albeit less noticed. The same authors retracted another paper from it on the same day (June 4) as the Lancet’s fake news. The reason given was the same: the database was ‘unverifiable’. Bizarrely, this did not stop it reaching print on June 18, albeit with a retraction ‘banner’.

Amid the noise of the two retractions, and the near-simultaneous termination (June 5) of the Oxford ‘RECOVERY’ clinical trial of hydroxychloroquine, another paper slipped into the NEJM on June 3 entitled ‘A Randomized Trial of Hydroxychloroquine as Postexposure Prophylaxis for Covid-19’. Authored by Dr David Boulware (University of Minnesota) and others from Canada, the paper, taken at face value, was an attempt to establish whether hydroxychloroquine can not just treat but actually prevent Covid-19.

The terminology ‘postexposure prophylaxis’ has been described as an oxymoron, but what it means is: if I have been exposed to Covid-19 (for example if I get a message from NHS Test and Trace) can taking hydroxychloroquine reduce my chance of developing the illness? This is like treating the illness, on the assumption you have already caught it, without waiting for either symptoms or a test result.

What is usually meant by prophylaxis is slightly different: before being exposed at all, can taking hydroxychloroquine reduce my chances of catching Covid-19 if I am exposed? Some people now call this ‘pre-exposure prophylaxis’, but the qualifier shouldn’t be needed.

Either way, the idea that hydroxychloroquine might preventyou catching Covid-19, or prevent symptoms developing if you do, isn’t strange. It’s been around at least since 2005, when a paper in Virology Journal entitled Chloroquine is a potent inhibitor of SARS coronavirus infection and spread was published. The authors were talking about the original ‘SARS-1’, but the virus isn’t that different. They reported ‘inhibitory effects . . . when the cells are treated . . . either before or after exposure . . . suggesting both prophylactic and therapeutic advantage’. Sharp-eyed Americans have long pointed out that Dr Anthony Fauci, the Chris Whitty of the USA, must have known all about a paper published by the institute he headed at the time.

The same was observed with SARS-CoV-2 in a February paper in Nature: Cell Research which also showed that chloroquine had a prophylactic effect, at least in vitro. Her Majesty’s Government knows about this, because I told my MP on 3 April. I asked if they would offer hydroxychloroquine as prophylaxis for front-line NHS workers, as India has done since March (I still haven’t had an answer). Not only does chloroquine have anti-viral action against Covid-19 once infected, it actually prevents infection (at least in vitro).

Does this work in people? This isn’t strange either: chloroquine has been used for decades to prevent, as well as treat, malaria. I first took chloroquine at the age of eight. Throughout my African childhood, I was regularly covered in mosquito bites, but never got malaria. We didn’t need a vaccine. One pill per week did it. Chloroquine is eliminated slowly, over at least a month, so you don’t need daily dosing for prophylaxis. It concentrates in the lungs (between 120 and 750 times the blood plasma concentration). This doesn’t help much in malaria, but is exactly where it’s needed to protect against respiratory infections. As for hydroxychloroquine, it’s very similar, and even better against Covid-19 (both treatment and prophylaxis).

To summarise: chloroquine not only inhibits, it prevents Covid-19 infections in vitro; it is eliminated slowly and concentrates in the lungs; hydroxychloroquine is similar and better. So there are plenty of rational reasons to suppose hydroxychloroquine is an effective prophylactic against Covid-19. Donald Trump thinks so; the top dogs of the Chinese Communist Party think so; Dr Zelenko, with only one lung and immune-compromised, is so confident that he sees Covid-19 patients without a mask. He has just had surgery for his rare cancer, but hasn’t got Covid.

Showing effectivenessover many people is a bit harder: ‘nothing happened’ is the best result. You ought also to show ‘something bad happened’ by not taking the medicine. India is very happy: all healthcare workers get hydroxychloroquine as prophylaxis, and Western countries really should take note, but let’s return to the NEJM…. 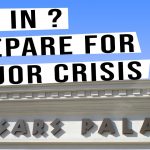