Remember that old saying give me a child for the first seven years of its life, and you can have the rest? That or similar has been attributed to the Jesuits. Regardless of who said it or the exact wording, it is true. In the first few years of our lives we learn more than at any other time. We learn to crawl, to walk, to run, we learn about taste, touch, perspective, we learn to read, and much more. But what happens when we learn things that are not necessarily true, or outright false, can we unlearn them? Yes. Some of America’s leading atheists were once devout Christians, and some of the world’s leading anti-Islamic bigots were once devout Moslems, but some things are difficult to unlearn, and with the indoctrination going on in our schools at present, this should give us cause for concern.

A lot of this indoctrination concerns the supposed evils of capitalism, and something called racism, but recently, the attack on masculinity has been taken to a whole new level. This really began with second wave feminism and just as importantly the decriminalisation of male homosexuality. In the UK, this happened in 1967 with the so-called Wolfenden reforms, something that had been in the pipeline for a long time.  Two years later, the Stonewall rebellion in New York saw a different kind of reform when a large group of homosexuals and lesbians decided to fight back against an arbitrary police raid.

While the persecution of homosexuals and the criminalisation of homosexuality is wrong, this doesn’t mean homosexuality is a good thing and that it should be encouraged. The emerging organised homosexual movement took issue with that, and along with the feminist movement launched an attack on the traditional family, the so-called patriarchy. The gay liberation front manifesto stated this openly.

By the early 1990s, libraries on both sides of the Atlantic were openly stocking books that took aim at the traditional family, books targeted at children. One was called Daddy’s Roommate, the title says it all. Even worse was the overtly titled How Would You Feel If Your Dad Was Gay? which was aimed especially at black boys. (Incidentally, the white American female co-author of this book was a radical feminist who was brainwashed into believing she had been sexually abused as a child by her own father. Fortunately, she eventually realised this wasn’t true).

Along with most working class whites, blacks have always been less accepting of homosexuality than the white liberals who attempt to indoctrinate them. This is most notable in former British colonies which have not followed the line of their Imperial masters, and have continued to criminalise or at least marginalise homosexuality.

Recently though there has been another and arguably even more sinister development; the very concept of gender is being attacked, gender and sex. Absurd though it is, there are some idiots with letters after their names who are claiming biological sex does not exist. That may be too much for the public to take in at the moment, but the attack on gender doesn’t sound quite so absurd.

If you studied French, or if you are a native speaker, you will realise that all nouns are gendered: the boy translates as le garçon; the girl as la fille; and the table as la table, so a  table is masculine. But all plurals are feminine, so not only is the girls rendered as les filles, but the boys is rendered as les garçons. The German language has three genders der, die, and das – but again, objects can also be masculine or feminine as well as neuter, while again, all plurals are feminine. Thus in German the table is masculine, der Tisch (all nouns are capitalised), while the tables is feminine, die Tische.

Although learning which words are masculine and which are feminine can be difficult, no one ever confuses the gender of a table with its sex. Everybody realises that like every other inanimate object, a table has no sex.

Traditionally, babies are dressed in blue or pink – boys in blue; girls in pink. This may be because pink is “softer” on the eye than blue, and thus considered a feminine colour. Except in Australia, it would appear, where now even pre-schoolers as young as three are being targeted by the gender-fluid lunatics. Parents are said to have pulled their young ones out of at least one nursery which has been using a book called Pink Is For Boys to indoctrinate the young.

Two years ago, Moslem parents in Birmingham, England withdrew their kids from a school that was promoting sexually deviant lifestyles. Thankfully, it is now not only organised religious groups who are pushing back. We can expect to see more resistance in future. Again, while no one has the right to persecute homosexuals or others who promote weird beliefs and practices in the sexual field, these are matters that concern adults, and adults only.

Rainbow coalition should be illegal and persecuted.

Homosexuality needs to be put in perspective. It is just an unfortunate affliction which should be viewed with the same sympathy we might feel for any other dysfunctional human being but it should never be exonerated, or presented as a valid choice. 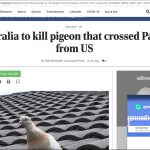 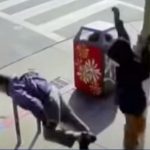