There would have been no outrage in Washington, so Ashli Babbitt wouldn’t have been murdered by a trigger happy cop who will never be held to account for his crime.

There would have been no runaway inflation, or at least a lot less of it.

There would have been no mass sackings of hospital staff and no mass resignations of law enforcement because the Trump Administration wouldn’t have enforced Draconian and unconstitutional masking and vaccination mandates on the population.

Christopher Wray would have been sacked and replaced with someone who has a true commitment to purging corruption from the FBI, Sidney Powell, perhaps.

The indoctrination of the young with critical race theory and gender ideology would have been stopped dead.

Opportunity zones and genuine criminal justice reform would have been undertaken to help the truly disadvantaged and to give people with criminal records a second chance without turning dangerous predators loose as is currently happening.

Trump would have removed the troops from Afghanistan, but he would have done it according to a proper plan, ensuring all civilians would have been evacuated first, followed by Afghan interpreters and others at risk, followed by the military after they had ensured no equipment or ammunition would have fallen into the hands of the Taliban.

Peace efforts would have continued in the Middle East resulting in a proper truce between the Israelis and the Palestinians followed by the creation of a proper Palestinian state rather than the madness there is now.

The North Korean leader would have been invited to Washington and accepted, resulting in the demilitarisation of North Korea and massive foreign investment in the country that would have benefited its people.

All this is what could have happened. Aren’t you glad you rejected the white supremacist in chief and voted for Joe Biden? Enjoy your police state Joy Reid, Don Lemon, Rachel Maddow, and all you other overpaid morons.

This is pure fiction. I cannot understand why this site, which makes high quality geopolitical analysis, defends and promotes Trump

if you are intelligent enough to recognize that the Duran makes high quality geopolitical analyses, then perhaps you should take this as a clue to examine the election fraud and realize that almost everything your government/Dems have told you about Trump were brazen lies and vile propaganda.

Susan, my dear, there are only two ways a gal can make $81,100 in 9 months working 3 hours per day, and one is by opening her legs to anyone with lots of cash, or selling her soul to the devil and do evil and hurtful things to innocent people, like so many are doing these days thanks to Big Tech.

Last edited 10 months ago by Helga I. Fellay
1
Reply

Make our egos great again
Reply to  Helga I. Fellay

True but he’s still a bloviating buffoon too full of himself to ever manage an intelligent call. I mean he chose Bolton as an adviser then fired him in short order, not knowing or ignoring what the world knows for decades of the guy, meanwhile keeping his no better yes-man Pompeo. He sent missiles into Syria over the trumped up word of Ali Graba, the suicidal washed up Brit spook with sticky fingers and his 40 ISIS thieves and over a few tears from the Princess, I guess hoping to get some applause from his MSM persecutors, which he did… Read more »

It’s just one guy that’s found a niche here. No big deal. I think everyone’s pretty much accepted that America’s political process, the people it chooses and how and why they’re chosen has become a joke to its own citizens and the world at large.

I believe that he did win and that if the US had held elections instead of exercises that would have made Tammany Hall and Mayor Daily’s machines look like child’s play, that he would be president. I personally know persons who received 2-5 unsolicited absentee ballots and others who were not allowed to vote because they had “already voted”.

He would have inflated the American dream-on balloon until it ruptured. At least with Biden it’ll just deflate and skulk away quietly.

At this point in time, your absurdity is painful. Trump is telling you “what if.” “TAKE THE VACCINE(S)” were his words recently in Alabama. With more deaths per year than all other vaccinations combined in the history of vaccinations (not to mention non-fatal “reactions” like miscarriages, heart attacks, disabilities etc), there is no other “what if” to consider.

You need to face the reality that Trump was (and still is apparently) playing you. Do you know what “controlled opposition” means? With Barrett’s allowance for a “vaccine” mandate in New York, it’s very clear.

There it is in plain sight. Not hiding but out in the open. An Obama appointee and a Trump appointee. It makes no difference which affiliations they claim. Flipping is easy when they’ve got ice in their veins.

I’m not sure about the Israel-Palaestinian part….
:))) 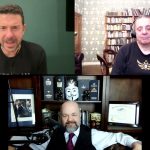