Who remembers these clips?

But overall, Donald Trump advocated for good relations with President Vladimir Putin and the Russian Federation. He did so in his campaign and he did everything he thought he could do – under the press of the Deep State’s “Russia Collusion” disinformation blitz – to be cordial and helpful and in some kind of partnership with President Putin.

But was he manipulated by this “Russian Collusion” campaign to actually do the things that propelled Ukraine and Russia into war with one another?

Some journalists think this is exactly what happened. Dr. Steve Turley chronicles this. If this is indeed the case, we can bet that Donald Trump will not be fooled twice.

And if it is not actually the case, it is still likely that the Trumpster will not go for the games this time if he is elected.

NOW, does it make sense why Facebook and Twitter and almost all the legacy media is cutting off the world from Trump and Trump from the world? Does it make sense why the ballot counting in six states mysteriously stopped in the middle of the night, and by morning, Trump was losing in states he was handily ahead in just hours before?

He was messing with the PLAN.

The Plan was revealed in its full brazen character Saturday, March 26th, in Joe the Imposter’s rant and angry – no, furious! – call of “For God’s sake, this man cannot remain in power”, meaning President Putin.

This sort of thing has us closer to nuclear war, World War III, than any event since the Cuban Missile Crisis of 1962. I will be full of invective here, but one way of looking at it is that the Lavender weirdos want to take out the voice of Reality. That voice is not only Vladimir Putin, it is also Donald John Trump.

You can bet that if he wins re-election, these errors will not be repeated.

Things may be as you describe, however, Trump policies are so unconcerned for and hence damaging to the environment that another term or two of his administration might do more harm to us than Biden will. If you can convince Trump to be more of an environmental champion he will be much more attractive. 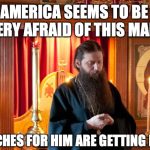