On February 24, Russia launched a “special military operation” on the territory of Ukraine. NATO refused to send its troops to Ukraine to take part in the conflict. At the same time, large NATO forces are concentrated near the borders of the “Union State” (the Russian Federation and the Republic of Belarus). These forces began to concentrate in the Baltic States and in Poland long before the Russian invasion. And now the number of these troops, under the cover of various military maneuvers, is increasing. If NATO does not plan to take part in the conflict in Ukraine, then against what these forces are planned to use?

For such a large-scale invasion, as Russia began, very serious reasons are needed. It is obvious that there were such reasons. The invasion of Ukraine is a preemptive strike. In other words, Russia took preventive measures, thereby spoiling NATO’s plans to support Ukraine in recapturing the eastern territories and, possibly, Crimea. The restoration of territorial integrity would open the way for Ukraine to join NATO. To implement these plans, the number of NATO troops in Eastern Europe has long been increasing.

In early February 2022, U.S. President Joe Biden announced the deployment of 3,000 U.S. troops in Eastern Europe. The Pentagon said that this is a temporary increase in the number of American troops in Europe in order to strengthen NATO’s Eastern Flank. There were already 4,500 American troops in Poland at the time. About 8,000 paratroopers of the 82nd Airborne Division were added to them. As a result, the number of foreign military personnel in Eastern Europe increased by more than 10,000 military people, 40 fighter jets and the same number of helicopters.

It is worth recalling that the troops of Lithuania and Poland, which were concentrated on the border of the Republic of Belarus during the migration crisis, remain there until now. There are no more illegal migrants, but the troops remain.

It is also no secret to anyone that by the beginning of autumn 2021, more than 100,000 Ukrainian troops were concentrated on the line of contact with the so-called Luhansk and Donetsk People’s Republics.

On February 18, 2022, the U.S. European Command’s international Saber Strike 2022 exercise began in the Baltic States and Poland. According to the scenario of the exercise, the transfer of American units from Germany to the Baltic States through the territory of Poland was carried out. Joint maneuvers were carried out at the training ground in northeastern Poland.

Saber Strike was reported to be an annual international tactical exercise. In addition, it was emphasized that the Saber Strike 2022 exercise was planned in advance in accordance with the plan for 2022.

However, it is known that Saber Strike maneuvers usually take place in summer. But this year they started in winter and were supposed to end on March 23, according to the plan.

There are good reasons to believe that the Saber Strike 2022 exercise was conducted to divert Russia’s attention from Ukraine’s preparations for an attack on the self-proclaimed Republics of Donetsk and Luhansk in early March. 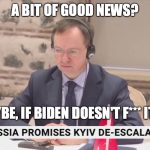