On Friday, the 13th of November, America set a global record well past any other nation’s number of daily new cases of Covid-10 (coronavirus-19) infections ever: 183,527 new cases.

Here is the situation within America’s states: North Dakota had a higher percentage of its residents having become infected by the virus than any nation in the world did: 79,524 per million residents, or nearly 8% of its population. The most highly infected nation is the European statelet of Andorra: 74,052 (and that’s the only nation that has an infection-rate which is above 50,000 per million). Other U.S. states which have infection-rates that are above 50,000 are: South Dakota (70,453), Iowa (55,998), and Wisconsin (51,725).

The states that are soaring the fastest in their numbers of daily new cases (as compared to its number of previously existing covid cases) are: Kansas (5.2%), Colorado (4.2%), Wyoming (4.0%), & Michigan (3.4%). If an emergency can be said to exist anywhere now, then it’s there. NPR in Kansas City headlined on November 13th, “Coronavirus Patients From Rural Communities Without Mask Orders Are Crowding Kansas City Hospitals” and reported that, “About three-quarters of Kansas and Missouri counties lack intensive care units, forcing critically ill rural patients to seek care in major cities.” But also the states where the cumulative rates of cases are high are facing covid emergencies. For example, the Grand Forks Herald headlined on November 10th, “With North Dakota hospitals at 100% capacity, Burgum announces COVID-positive nurses can stay at work”, and reported that, “The Republican governor said hospital administrators asked the state to take the extraordinary step.”

The states with the lowest rates of rises in their percentages of population that have become infected are: Virginia (0.6%), North Carolina (0.6%), Georgia (0.7%), South Carolina (0.8%), Mississippi (1.0%), Maryland (1.2%), New Jersey (1.2%). However, New Jersey has the highest death-rate from the disease, of all the states: 1,875 per million residents, versus the current U.S. average of 755 per million. Though NJ has had slightly fewer covid cases per million residents (31,115) than the entire U.S. has had (33,407), that state has had a higher percentage of them die from the disease. But NJ has one of the nation’s lowest rates of current increase in its number of cases.

The rankings of steepness in rise (or in decline) tends to gyrate far more than do the rankings in terms of cumulative percentage of population who have become infected. Consequently, overall, North Dakota currently has the nation’s worst coronavirus situation — and it’s even the world’s worst (worse than even Andorra).

The worst situation is determined by death rate NOT infection rate. Infection rate can be false positives or asymptomatic cases whereas DEATH is definitive.

I’m sorry Eric, but there is no correlation between testing, masks, infections and death. You are correct in that normally infections would be a leading indicator while deaths is a trailing indicator. But this would be based on cases (i.e. hospitalizations and hospital visits. Not fake tests being equated with people who are actually ill with whatever seasonal respiratory illness that is going around. In fact the stats show that lockdowns, masks, testing have had minimal to no impact on the trajectory of the disease.

I appreciate your analysis of the problem.

You are in denial Eric. They have got you bamboozled, just as they planned. Straining out gnats and swallowing camels. Start from the premise that is is all a psy-op to justify their population control grid. The numbers are all part of the game. They are no more real than the virus. It is all a media creation. It has been in preparation for decades. This is the end game, the final chapter, the denouement. This is when they haul in the nets. Are you going to be caught or will you escape?

The US test kits are made to show positives for dead ‘virus’ cells. The whole thing is farce and a huge lie by the oligarch ruling class of the West. The entire ruse was gamed at Event 201 in Oct. of 2019. The whole ‘Covid’ plot we are witnessing now plays out just as the movie ‘Contagion’ which was the model for ‘Event 201’. Why do you persist in championing their charade?

Exactly – PCR cannot tell live cells from dead cells. All it can tell is there is a possibility something is there.
What we have is a flu/virus that is no more deadly than any other flu/virus.
The sad part is otherwise smart people have been hustled.

Hi @Terry R, You are correct. I provide you with a couple of articles below to help you with your point. Jon Rappoport https://healthimpactnews.com/2020/how-they-will-make-the-covid-vaccine-appear-to-be-working/ CEBM – William Farr who said “The death rate is a fact; anything beyond this is an inference.” He is also the epidemiologist who gave us the theory determining the trajectory of epidemics which if you look at the deaths stats is consistent with covid-19. https://www.cebm.net/covid-19/covid-19-william-farrs-way-out-of-the-pandemic/ Dr. Edgar Hope-Simpson who shows the seasonality of all coronaviruses and influenzas diseases (i.e. spikes happen earlier in the northern hemisphere than in the southern hemisphere) https://youtu.be/ia8D7Gnq0TE Articles showing that… Read more »

Eric, striking how you fail to understand even the basics of what you are reporting. You assume that the reporting of a case is consistent with medical literature which defines a case as someone manifesting symptoms of a particular disease. In the context of covid-19, this is being used in relation to a positive PCR test (a test which has no scientific validity). All you can actually do is look at hospitalizations and deaths. Even this information is somewhat dubious since if you have a car accident and are hospitalized and have a positive PCR test, you are classified as… Read more »

This is more really good information. Thanks again.

You know what I noticed last time I was in Kansas City? I noticed how thin, healthy and robust everyone appeared to be. I just can’t believe that any type of infectious disease could really have such a severe impact on one of healthiest populations in the United States! Being morbidly obese, diabetic, and addicted to junk food are NOT precursors for severe COVID-19 illness…. who’d have thunk that Kansas City could be such a hotbed for severe illness of any ilk?

The life-expectancy in Kansas is the 32nd-best among the 50 states: 78.5
https://en.wikipedia.org/wiki/List_of_U.S._states_and_territories_by_life_expectancy
and that’s below average for the United States.

The four worst are: West Virginia, Mississippi, Kentucky, and Alabama.

The four best are: Hawaii, California, New York, and Minnesota.

Faked virus and useless statistics make for high-dramatics. No one I know knows anyone with the ‘virus’.

Dr Zuesse, a “fake test” cannot detect anything. These fake “cases” are the yearly flu. That is part of the Gaslighting to keep the Scamdemic going and lock us down for all Eternity.

He’s gone over to the dark side.

The “cases” are rising because the tests are rising, However the tests are useless for detecting infections according to their inventor. Depending on the number of iterations used they will return up to 100% positives. They’re just magnifying an already existing strip of DNA in the human genome. Everyone has it. In other words this is a gigantic global psy-op. Don’t believe any of it. It is being used to put in place the population control grid that will track and trace every human being on Earth from cradle to grave, Eventually you will be unable to buy or sell… Read more »

Yeah, and it’s probably the same people who wrote the bible that are dragging us through the mud here.

Last edited 10 months ago by Culture of Outrage
0
Reply

This is what you’re missing, Eric – by Dr. Joel Hirschhorn – https://www.unz.com/article/fauci-versus-frontline-doctors-and-science-pandemic-malpractice/ 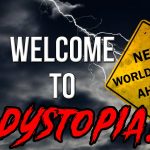 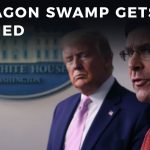