﻿While mainstream media and political pundits tell us that Ukraine is a democracy, Tucker Carlson, the best TV journalist in the United States, gives us the real picture.

There is a lot of good information in Tucker’s monologues, and the transcript of the video above is available in the article Tucker Carlson: We have a right to know what’s going on in Ukraine, but our leaders are lying.

Please note that all of Tucker’s monologues are available in written form. It could be a good idea to bookmark foxnews.com/category/shows/tucker-carlson-tonight/transcript/tuckers-monologue to be able to quote Tucker and his sources in other media.

In this monologue Tucker says this:

So, with a single command, Zelenskyy made it impossible for anybody to run against him for president. He did this not just to Opposition Platform for Life, but to ten other political parties that he believed were insufficiently loyal to him. They’re all illegal now. Obviously, there’s a war underway in Ukraine, and on that basis, Zelenskyy has declared martial law, but we must tell you, there is no evidence that the opposition parties he banned were aiding Russia in its war against Ukraine.

On the very same day that Zelenskyy shut down opposition media and all opposition political parties, professional liar and Atlantic Magazine pundit David Frum posted this on Twitter verbatim: “Ukraine may be the first example in human history of a country that, under the pressure of war, is becoming ‘more’ tolerant and ‘more’ liberal.”

Right, so when you outlaw all criticism of yourself, that’s called tolerance. It’s called democracy. Don’t take the word of a single Canadian warmonger, propagandist. David Frum is hardly alone in telling you that. All of Washington is telling you that. Watch.

JOHN BARRASSO: So proud of President Zelenskyy and the courage that he has shown and in Congress, we are trying to get the administration on board.

DICK DURBIN: He, of course, by his example, shows the kind of courage we all hope we can reach and provide at a moment of real testing.

BEN SASSE: Government doesn’t give us our rights. Our rights come to us from God and government is just a shared tool to secure them and you see that spirit, that American Philadelphia 1787 spirit in Zelenskyy right now.

In this Tucker monologue, we also see a scary clip from the Ukrainian doctor Gennadiy Druzenko who advocated for the castration of captured Russian soldiers because they are cockroaches, not people. Druzenko later apologized, but these are not signs of a healthy democracy.

The only reason for subscribing to Fox News on YouTube is the segments from Tucker. At the end of all Tucker videos, we get a few annoying seconds from neocon warmonger Sean Hannity, telling us to subscribe to the Fox News YT channel. Because of this, I watch these videos in a browser with adblocker.

But of course, if you watch videos from good content creators like The Duran, Alex Christoforou, Alexander Mercouris, or Gonzalo Lira, you should disable the adblocker. One alternative is to play the videos without sound in a browser without adblocker and then watch the ad-free videos in another browser with an adblocker enabled 😉

Kristian Kahrs describes himself as a former NATO aggressor and warmonger in Kosovo, turned into a warrior for peace, democracy, and freedom of speech. Kristian is a Norwegian living in Belgrade, Serbia, and there is more about him on his website ohrabrenje.com, the Serbian word for encouragement, where you can sign up for his newsletter. Also, follow Kristian on Gab, Telegram, VK, and his Duran Locals profile.

The old idiom ‘he who pays the piper calls the tune’, should be kept in mind when examining so called “Democracies”. Those who control the Media, will also be the rulers of the Democracy, by shepherding malleable minds.
Today, Democracy is little more than a euphemism for Plutocracy, as the plutocrats control the Democracies through their ownership of the Media and Technocracy.

I’m an American, and Tucker is the ONLY honest news person we have in America, not controlled by the elites. As a veteran, I can tell you that war does not make heroes. It only makes victims. You already are or are not a hero. War won’t make you one. 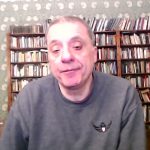