Justin Trudeau has overcome a raft of scandals, ranging from the juvenile and relatively benign (the ‘blackface’ scandal that erupted last month after Time magazine published photos of Trudeau wearing brown face paint at a costume party in 2001), to the blatantly corrupt (he and his aids tried to impede the criminal prosecution of SNC Lavalin, an engineering firm based in Quebec), and won a second term as Canada’s prime minister.

The final results were released late Monday evening: Despite losing the national popular vote, Trudeau’s Liberal Party won 156 seats, giving them a clear plurality of the vote. However, Trudeau’s government will lose its outright majority, meaning that Trudeau will need to rely on votes from opposition parties to pass his agenda (the threshold for a majority in Canada’s House of Commons is 170).

The Liberals had 177 seats when Trudeau dissolved Parliament 40 days ago at the start of the official campaign season. 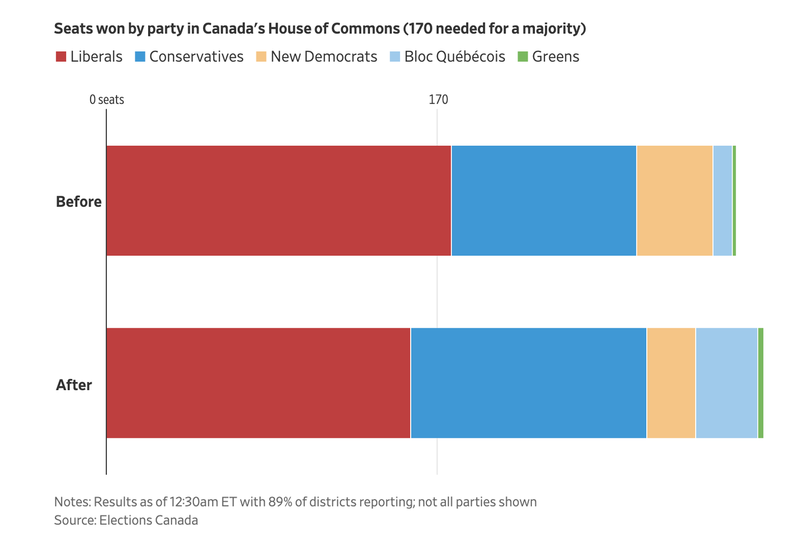 Though he has established himself as an icon of liberal values and multiculturalism, Trudeau’s ostensible commitment to feminism and bolstering the rights of minorities was exposed as cynical political posturing by the series of scandals that marred the final year of his first term.

His party lost its lead in the polls during the final weeks of the election, as several images of a young Trudeau wearing blackface surfaced, leading the PM to embark on a national apology tour that featured this cringe-worthy moment where Trudeau tries to explain what he did and apologize to a group of kids (because “what kind of monster lies to a child?“).

Though Trudeau managed to prevail over his conservative rival Andrew Scheer, the enthusiasm that helped his Liberals retake the majority after a decade out of power back in 2015 was clearly lacking this time around. As one pollster told WSJ, Trudeau has lost the luster of progressive icon, and has instead become “just another politician.”

“Trudeau has become just another politician – and a flawed one at that,” said Darrell Bricker, president of Ipsos Public Affairs, a polling firm.

Ipsos found that during the final weeks of the campaign 57% of Canadians didn’t approve of the job Trudeau was doing.

To be sure, Trudeau pulled out all of the stops during his campaign. Sensing his old friend might be in trouble, former President Barack Obama made an unprecedented endorsement by saying he backed Trudeau for a second term.

Then again, winning back-to-back majorities is a relative rarity in Canadian politics. It hasn’t been done since the Liberal government of Prime Minister Jean Chrétien back in the 1990s.

When it comes to the market reaction on Tuesday, it should be relatively mild, according to Jonathan Rose, a professor of politics at Queens University in Ontario, who spoke with Reuters about the vote.

“Historically, the Liberals have been kind of a chameleon party. They’ve campaigned from left and governed from the right. They’ll moderate the way they govern for the next few years.”

“Markets like stability and minority governments are inherently less stable than majority governments, but Justin Trudeau and the Liberals are a known commodity and so it shouldn’t be disruptive. Right now they don’t need the Bloc Quebecois. That’s probably a relief for the Liberals.”

“The poor showing of the NDP and the huge showing of the Bloc Quebecois is a surprise. I also expected the Greens to do a little better. I think they (the Bloc) were expecting 20 seats and to have over 30 is amazing.”

After Trudeau’s victory was assured, President Trump tweeted his congratulations to the man who has sometimes been described as Trump’s ‘liberal foil’.

Congratulations to @JustinTrudeau on a wonderful and hard fought victory. Canada is well served. I look forward to working with you toward the betterment of both of our countries!

During his victory speech, given half in English, half in French, Trudeau thanked his supporters, and insisted that he now had a clear mandate to continue with his Liberal Party’s program, adding that Canadian voters had rejected the “austerity” pushed by the Conservatives.

If you think the US is a divided nation, you aint seen nothin’. There was literally a line down the Ontario/Manitoba border, to the east, Liberal/Bloc, to the west, Conservative/NDP. There were a handful of ridings around greater Vancouver that went liberal, other than that, the country is absolutely split down the middle, hence the Conservatives winning the popular vote. What was particularly disturbing was the CBC TV coverage, they announced the riding results as they came in until the BC returns started coming in, at that point, they LITERALLY stopped reporting riding results and started talking about climate change… Read more »

I suspect most Americans have no idea how the Canadian political system works, its substantially different from the American system. This probably leads to a lot of confusion when American hear Canadians saying things like “a liberal (or conservative) minority is probably the best outcome…” In Canada, we don’t elect a “president” per-se, the Prime Ministers power to push his agenda through is more or less proportional to the number of seats his party secures ( I am over-simplifying a bit, but there really isn’t room to get into the intricacies) in the election. In other words, Trudeaus power is… Read more »

CBC is fully funded by the Canadian government.

A thousand times better than Scheer. Who in their right mind wants a U$ citizen and a Harper clone as PM in Canada? Look at what a born-in-the-U$ Trump clone is doing to the UK.

Scheer is a Bilderberg candidate, just like Trudeau. They are both One World Order neo-globalists, they vary their rhetoric just enough so that the easily duped will believe they are being given a choice. A much better analogy would be to compare a Scheer/Trudeau choice to the choice between Jeb Bush and Hillary Clinton.

One thing I will say about Scheer, a Conservative majority would have been very troubling to me for one reason. This is a bit of a stretch, I don’t really think it would happen, but based on the Conservatives past track record of capitulation to US deep state hegemony (especially under Stephen Harper) and their close ties with Israel, it would be a concern that if we had a Conservative majority, they could be cajoled into supporting the US deep state doing an end run around Trump to start a hot war with Iran, and the consequences of that do… Read more »

More Castro-like usurping liberties for Canadians, more real black -face – as Canadians give up the country their Native European ancestors conquered and settled and created, and more multi-culti bullshit, decreased trust and good will, more crime, more Trudeau. Oh God…. Canada… 🙁 what did you do

“Canada didnt “do”. Ontario and Quebec “did”. All you have to do is look at the electoral map. Sorry, I cannot seem to get a link to function, but do a quick duckduckgo search, and take a look.

Just goes to show 1) how corrupt the electoral process has become and 2) the level of ambivalence Canadians have toward their Politics…
There is a serious issue with this communist miscreant yet the Canucks let him slide on in….

Again, the Canadian people did not let him slide in, in fact, there was a concerted effort to oppose him. He lost the popular vote. The problem is that the Canadian electoral system is corrupt, and that the power to elect resides in one province, namely Ontario. Quebec can play the role of spoiler, but its Ontario and Ontario alone that decides our Prime Minister. Its as if the sole power to elect the US President resided in the state of New York. This is why the electoral college, which many Americans do not understand the purpose of, is so… Read more »

Urban Ontario refused to vote Conservative because we live with a conservative Premier who is ruthless in cutting costs without regard to the impact of decisions. Doug Ford (Rob Ford’s brother) operates entirely under the control of his ideology and has turned of the voters here in Ontario. Therefore, Trudeau – who has broken ethics rules more than any other Prime Minister, who has government money going to all of the Canadian press, who appears to have no problems lying even when confronted and who displays no understanding of the rule of law or limits to his power, keeps minority… Read more »

No, I totally understand, and like I said in my first post, ” a Liberal minority is the best outcome that could have been hoped for” and I could just as well have substituted “conservative” the point being that they are both equally unpalatable choices, and a minority government at least puts some restrictions on them. Like virtually all western countries, we are restricted to choosing between two candidates that are pre-chosen for us by the Bilderberg. I don’t know how we can get the bulk of the population to get their collective heads out of their collective @ss so… Read more »

Trudeau is a declasse, brainless skank and the golem, along with his second in command, Ukro-Fascist dwarf and FM Freeland, of George Soros.