Across Lebanon people are protesting against corruption, shortages, unemployment, and what they see as political elitism and crackdowns on dissenters. The Government’s decision to tax people using WhatsApp basically was the last drop that filled the cup. The protesters, Christians, Shias, and Sunnis, are chanting “revolution.” Hezbollah, who leads the ruling coalition, opposes a change in Government. Hassan Nasrallah said the administration has other options outside tax hikes; and that if the Government resigns it will take one or two years to form another. He also hinted that everyone, rich and poor, should make a sacrifice. Really though, asking the poor to sacrifice is redundant. Let’s start with the country’s sectoral balances as percentage of GDP in the last 9 years. The situation is completely unsustainable. 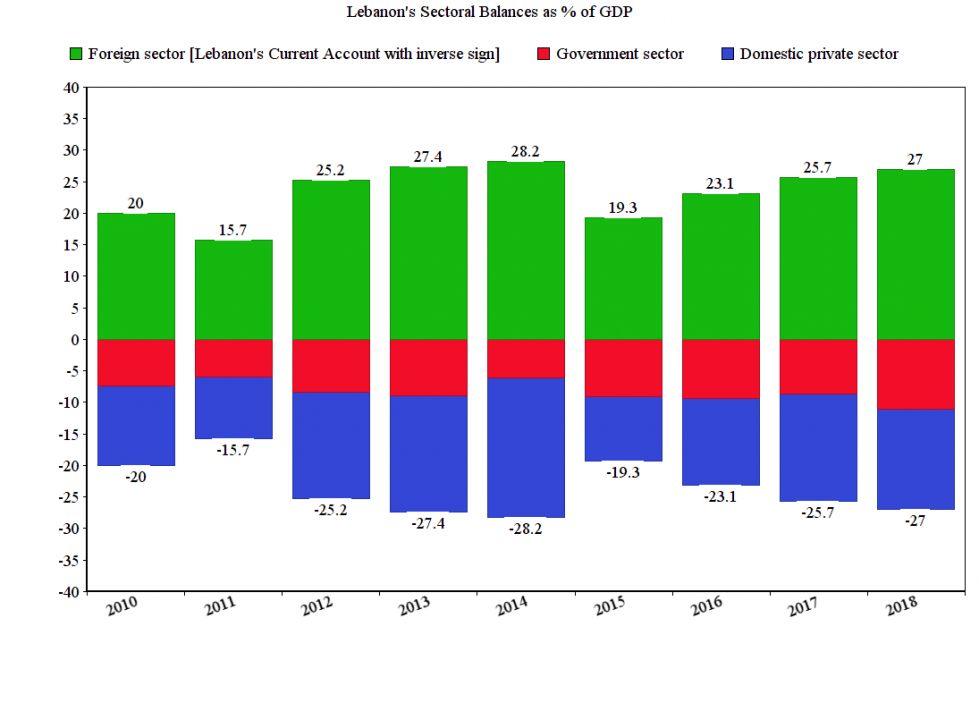 Large back to back Government and domestic private sector financial deficits. The Lebanese economy is service-oriented and 80 percent of its consumption comes via imports. The major economic sectors include metal products, banking, agriculture, chemicals, and transport equipment. Main growth sectors include banking and tourism. According to the Economic Complexity Index (ECI), Lebanon is ranked 60th in complexity. For priding itself in the laissez-faire tradition, that’s a very poor position to be in. On the other hand, in 2018 Lebanon ranked 11th on the Financial Secrecy Index; with a strong history of banking secrecy [aka. money laundering and tax evasion]. The Government debt to GDP ratio is over 153 percent, and in the last fiscal year, the Government deficit was in the double digits [11 percent]. Interest payments consumed 48 percent of state revenues in 2016. The country’s gold reserves sit at around 280 tonnes, which translates into 14.7 billion US dollars [roughly 26 percent of Lebanon’s GDP]. Loans to banks collapsed from 53.43 trillion Lebanese pounds in February to 21.18 trillion in March; and slowly declined in the following months. More than a third of those under 35 years of age are unemployed. Lebanon [a small country] hosts over 1.5 million refugees from Syria. And since 2011, GDP per capita PPP [adjusted for purchasing power parity] has fallen year after year. More people choose to send their children to public schools, because they can no longer afford private education.

Even if the current administration were to take correct economic measures, there’s no way for the country to bounce back without some type of foreign aid [emergency loans, extensions, debt cancellations]. For some time, foreign creditors have pledged assistance [around 15 billion US dollars in “soft” loans], but only if the Government undertakes structural reforms and austerity measures. Having incurred the people’s ire, it’s hard to see a return to calm with the same faces left in charge. Political activist Rhana Khoury, in a segment on Al Jazeera, who wants the current administration to resign and for new people to step in, listed some measures: progressive taxation on bank profits, taxes on rentiers [highlighting the issue of empty apartments], and not jailing people for their opinions.

Geopolitical realignment is not part of protesters’ demands. This is a very important point! The people are angry about socio-economic conditions and corruption levels. To repress such an organic and legitimate movement, instead of listening to it and delivering the necessary reforms, would be a grave mistake. Rhana Khoury emphasized that the cohabitation of sectarian leaders has not delivered tangible results, except for poverty and corruption, and that Hezbollah should take responsibility and break away from this rotten coalition. Well, the corruption part may be true, but the jolt in poverty really was facilitated by the so-called Syrian civil war [Deep State op to oust Assad and dismember that country].

By far, the biggest problem is shortages and private sector debt. Without imports of food, fuel, and raw materials, the country dies. If you improve the economy, you take care of the banks as well, for the value of loans made [their assets] will appreciate versus deposits [which are their liabilities, fixed in value]. But before we get to that, we need to also look at the financial situation. A big, big problem in Lebanon is its legal tender laws. US dollars enjoy legal tender status, alongside the Lebanese pound. On top of that, the Lebanese pound has been pegged against the dollar at a level of 1,507.5 pounds for more than 20 years. It’s Venezuela all over again in financial illiteracy…

2) Eliminate the peg. Allow the Lebanese pound to float freely. This provides maximum space for both fiscal and monetary policy.

3) Announce emergency import rationing measures. Prioritize the use of scarce foreign reserves to secure purchases of basic commodities [such as food, fuel, and pharmaceuticals]. Suspend imports of non-essential goods [like luxury items, cheese in spray cans, toys etc] until the situation has improved.

4) Announce a 100 percent land-value tax for the next year, to be collected by the end of the next fiscal year. Site value assessment will be done in the first quarter of each year. At the same time, starting with the next year, taxes on labor [including obligatory insurances], buildings, sales, and enterprise will be abolished. Removing the latter [regressive] taxes will get rid of all the dead weight, and implementing the former will add negative dead weight [aka. add efficiency to the economy] and will attract sound foreign investment, not inflows of hot money. To further ensure housing affordability and diminish communities’ dependence on local and central authorities, Community Land Trusts and Community Banks should be created and promoted nationwide.

5) The budgets for social security, health care, and pensions will be calculated based on effective requirements and effective supply; and will be financed from Central Government fiscal debits, just like the budgets for Parliament and the Central Bank board already are. The Single Payer system will be introduced, to the benefit of labor and wealth-creative capital, drastically eliminating bureaucracy and laying off bureaucrats [removing the majority of administrative costs for the country as a whole], doubling doctor-patient time by removing doctor-insurer time [increasing capacity and quality of service without increasing real costs], removing price distortions, medical legacy costs, issues regarding receivables and bad debt for hospitals and doctors.

6) Announce reforms for the banking system, to turn it from a wealth extractive business into a wealth creative one, and reduce the cost of liquidity. Do away with the inter-bank market, as it serves no public purpose. Make the Central Bank lend directly to member banks. Make it illegal for banks to mark their assets to market prices, illegal to have subsidiaries [keeping assets off the books], illegal to accept financial assets as collateral for loans, illegal to sell assets to third parties, illegal to contract in an interest rate set in a foreign country, illegal to buy or sell credit default insurance [transferring the price of risk onto a third party], illegal to lend off shore [for foreign purposes]. Banks would only be allowed to make loans based on credit analysis, service and keep those loans on their own balance sheet. They would be prohibited from engaging in any other profit making venture outside basic lending. Why? Because financial leverage and speculation is not productive economic activity. These measures also keep real costs down for regulating and supervising bank activities and greatly reduces societal costs in case of regulatory and supervisory oversight. Since banks are constrained in their lending by their capital and the actual demand for loans, not by reserves, the reserve requirement will be eliminated. Banks will figure out how much liquidity they need by observing the behavior of their customers. To further minimize investment costs and rentier incomes, the Central Bank will adopt perma ZIRP [permanent zero interest rate policy].

7) Announce a National Education Service. Firstly, there’s no need for an army of civil servants just to transfer money from A to B. Secondly, the Department of Education doesn’t maintain buildings, doesn’t choose the children, doesn’t rank the students, doesn’t choose or remove head teachers, it doesn’t lay down the curriculum, it doesn’t set mark exams. It doesn’t do anything that autonomous schools can’t plan on their own according to demand. The Department of Education would be abolished in order to create a National Education Service. Parents would be free to send their children to whatever school they want (be it a private or public school), and the schools get paid per pupil by the Government. The Treasury would transfer funds directly to the schools. The whole scheme would mean that there would be a National Board of School Inspectors, and the Local Authorities would administer the public schools.

8) Perform a national survey to take stock of all natural resources, capital and the level of capital decay, as well as that of the environment. Have a committee of specialists draw up a national investment plan based on these findings and subject it to public scrutiny [amending it as necessary in the process]. Commit all political factions to this grand scheme, so that irrespective of what party or coalition comes to power, the plan won’t be tampered with and will receive appropriate funding. And just to clarify, by specialists I don’t mean pseudo-technocrats, people with fancy business degrees and backgrounds at big financial houses [white collar mobsters]. By specialists I mean agronomists, engineers, geologists, physicists, architects, plant managers, logisticians, and the like.

The Progressive Socialist Party leader told the Lebanese Prime Minister he would prefer if they resigned together. Going off on a tangent here, while the so-called left in the West is calling for “multigenderism,” is drawing attention to “menstruation poverty” [in 1st World Countries… but they’ve got enough money to afford the latest tablets, smart phones, brand clothing and footwear, Netflix, and weed], is busy signalling virtue and policing people’s language in order to – they hope – get new members to rally behind their perverted, entitled brand of socialism… I say that socialism is built with iron, steel, concrete, and labor. Good luck distributing what you haven’t produced. Good luck building socialism by telling the rich “pay for my this and that.” Ayn Rand would be proud, for modern day leftists by and large end up validating the [fallacious] anarcho-capitalist framework, which ironically they detest so much. Returning to the crisis in Lebanon, its political class needs to come to grips with reality – Hezbollah in particular [I’m referring to the organization’s political wing]. With Iran having troubles of its own, I’m not sure Nasrallah can count on Teheran for any favors at this point in time. But there’s plenty of things the ruling coalition can improve until outside help arrives. Even bankruptcy reorganization would be good, preferable to flat out austerity like the Troika imposed on Greece [with two-timing leftists Tsipras, Varoufakis et al betraying the people], condemning that country to prolonged depression. Lebanon will fare better if the signatories of the Astana agreement will stay true to their commitments and bring about peace and stability.