Fifty years ago this month, the world’s first domestic violence shelter for women was opened, in Chiswick, West London. The woman behind it was Erin Pizzey, who soon became anathema to the feminist movement because she rejected the narrative of male violence, or gendered violence as it is often called nowadays.

Pizzey is now over eighty and not in the best of health. Bettina Arndt isn’t a young woman either, but she is a thorn in the side of both the sexual grievance industry and the domestic violence industry. Her latest essay is on the half century of lies about domestic violence since then.  Bettina is from Down Under, but here is a similar report from the United States. So what is the truth about domestic violence? The bottom line is that most of it is reciprocal, but men hit harder.

Most violent crimes, violent with a capital V, are committed by males between the ages of about 15 and 45. Domestic violence is a subset of these, and involves a lot more than wife-beating. Some of the actual statistics are surprising, for example, women commit the vast majority of parental homicides: 71%.

If we want to tackle a problem, it helps to identify the actual cause first. Something else that few seem to notice is that women are always considered victims even when the male is the injured party. At times, he can end up dead yet still be portrayed as the actual perpetrator, as in the recent Sally Challen case and the even more recent Emma-Jayne Magson case, although thankfully justice was done in the latter.

So what is the real solution? Sadly, there is no magic wand, but a lot of domestic abuse is related to alcohol and drug abuse. Women need to avoid these kinds of men, or get out while they can. Regarding the ultimate crime, murder generally attracts a life sentence, which is surely a deterrent. If someone is prepared to suffer that, then clearly simply tampering with the law will be insufficient. The only thing that can be said for certain is that the policies currently being pursued throughout the Western world are not working. Perhaps it is time for our leaders to listen to women like Bettina Arndt instead of the noisy and overtly dishonest domestic violence industry?

Why does no one ever want to discuss female emotional abuse of sons and husbands? Ever hear of a man needing to get a leave pass from his wife? Look at the number of adverts on TV where the man is always getting it wrong, only to be rescued by his wife. These ads are prolific and all signs of this insidious curse!

Hi guys. What is all this advertising for earning money doing here? Can’t you get rid of it? 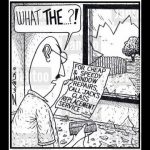