Three years ago, J.K, Rowling was an acclaimed children’s authoress. Now, the public is being told she is a bigot who hates men, not all men, but a certain type of men, in particular men who are so delusional they believe they are really women, and other men who pose as women so they can invade women’s spaces in order to do to women what they shouldn’t do there or anywhere else.

The latest barb at the creator of the Harry Potter franchise was reported by Yahoo! News, and it comes as no  surprise that her words and actions have been distorted.

J.K. Rowling accused of perpetuating the ‘false narrative’ that trans women are ‘predators’ in latest tweet

Oh boy, here we go again. In the first instance, check out what happened at the Wi Spa in sunny California when a dude sporting a moustache invaded a women only spa claiming to be transsexual. He was later identified as a registered sex offender. In the second place, what did Donald Trump say about Mexicans? They’re rapists, right? No, here is what he said, the full quote in context:

As he said “they’re not sending you”, Trump pointed to the audience. So did he call Mexicans rapists? No, this is a lie of semantics, one leftists are particularly fond of. By the same token, J.K. Rowling didn’t call “trans women” predators. Why should anyone even bother to correct such an obvious distortion?

Because facts matter. An enormous amount of hatred has been whipped up against Donald Trump by people pushing lies and distortions like the above, and although Miss Rowling is nowhere near as controversial, she has been subjected to a hate campaign which includes activists picketing her home.  She says she has received enough death threats to paper her walls. Does anyone not see why this should be unacceptable?

The main organisation in the UK that has been attacking Miss Rowling is Stonewall; last month when its Chief Executive was questioned by the BBC, she kept dodging the issue of Miss Rowling’s alleged transphobia, but who cares? Stonewall is an organisation that campaigns openly to indoctrinate the young in sexual perversion while J.K. Rowling has arguably done more to promote child literacy than anyone since William Caxton.

I just goes to show the lengths that the Cultural Marxists will go too, if you don’t take the knee, to every degenerate practice that these demonic Leftists promote.  Silence or acceptance of their degeneracy, is not enough for them. They will use Nudge Psychology Behavioural Change Techniques, and if you refuse to play along, they will attempt to smear your name and employ cancel culture, until you change your tune.  With the Media in the hands of the same Trotskyites, and the fact that they have taken control of the American Educational System, and are pushing their Critical Race… Read more »

YUP. It is important for the sake of clarity to name things as they are. Cultural Marxism is the right use of language. “They” told us 100 years ago they were going to do this to us. A 100 years later (the gradual ‘totalitarian tiptoe’) here it is in your face at the two minute to midnight moment. Well…”they” say, “we told you.” They: “It’s your fault now. We are just bringing BAD into the world. That is what we do. That’s our job assignment.” All of this nonsense about 57 varieties of gender and all the absurd, “we’re all… Read more »

I also do not know how much she has done to promote children’s interest in the occult. It might be a worthwhile undertaking to investigate that. A guess is that, because that is what her books are about, she has played a significant role. 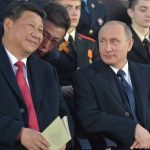