Or does it? Only one woman has filed a lawsuit so far, but don’t be surprised if more don’t jump on the bandwagon. The Cosby witch-hunt would have been comical if it were not so tragic. If you are not up to speed, very briefly, it started when Andrea Constand accused the veteran comedian of drugging and interfering with her sexually. This was a year after their sordid encounter. The District Attorney rightly declined to press charges, even though Cosby admitted the sexual contact but obviously claimed it was consensual.

If you think charges should have been filed then clearly you are not au fait with the three D’s of false rape allegations: drink, drugs, delay. This case included all three of them. Constand filed a civil suit and somebody – who could that have been? – leaked details to the media which resulted in a gaggle of demented women coming forward with similar claims.

After Cosby settled the case for a seven figure sum, the allegations went to sleep for a decade until a so-called comedian named Hannibal Buress made a joke at his expense. Then there was a deluge of allegations including the earlier accusers. The way this case played out in the media was comedic. All or almost all of Cosby’s accusers were white while Cosby isn’t, so what were the talking heads to do, side with them and be accused of racism, or with Cosby and be accused of sexism/misogyny and rape apologia?

The answer should have been to give these women the credibility they deserved, none, or at least to question them critically. One person who did, almost, was Don Lemon. The dumbest man on American television actually asked probably the only intelligent question he has ever asked in his entire career when he interviewed Joan Tarshis. She claimed Cosby forced her to perform oral sex, and Don said why didn’t you bite him, dear? He took a lot of flak for that, and actually apologised, but when Chima Benson was attacked by a serial rapist in her own apartment, she did just that. Dale Scheanette beat her to within an inch of her life, but a decade later she had the pleasure of watching him die by lethal injection for the murder of one of his victims.

Tarshis didn’t bite Cosby because she had never met him; she is away with the fairies, and indeed has admitted as much. Some of his other accusers are equally demented. Listen to Linda Ridgeway Whitedeer describing how Cosby allegedly orally raped her and asked yourself why no one in the room burst out laughing. Incidentally, her account was strikingly similar to the account of one of the false accusers of the English comedian Jim Davidson, which begs an obvious question.

It isn’t though Whitedeer who was the most important person in that room but her attorney Gloria Allred. It was in fact Allred who was responsible more than any other person for the avalanche of false allegations against Cosby, yet for some reason she was given a free pass by the media. She has also acted for some of the false accusers of Donald Trump, and was literally caught with her hand in the till when another of her clients admitted using a false instrument to bolster her claim against Judge Roy Moore.

Back to the present. The woman currently suing Cosby is has-been never-was actress Lili Bernard. Although she is based in Los Angeles, Bernard was born in Cuba, as was another Cosby accuser. The late Louisa Moritz claimed to have been orally raped by Cosby, but unlike most of his other false accusers she was so foolish as to give an actual time and place for this mythical outrage. Cosby wasn’t there.

Bernard first accused Cosby in 2015, claiming he drugged and raped her in 1990, but the case went nowhere because of the statute of limitations. Sadly, persistent lobbying by powerful special interest groups (and liars) has now removed this, as Prince Andrew found out recently, and Bernard’s civil suit appears to be proceeding.  Bernard claims to have been retraumatised by Cosby’s recent acquittal, but a glance at her IMDb bio should be enough to convince any white man to give Bernard a wide berth, and to dissuade any man of any race from sharing an empty elevator with her.

In spite of the time he spent in prison, Cosby can count himself lucky; on the other side of The Pond, several male celebrities have had their lives destroyed by decades old allegations from demented or simply malicious women, most notably Rolf Harris, one of the greatest showmen or his or any age, and publicist Max Clifford whom they ensured died in prison.

I am Not sure of the point of this story if Cosby is not guilty of this offence this rape,he is certainly guilty of the others, the man or creature makes Weinstein look like a boy scout,dozens of women can’t all be liars who charge Cosby of a form of necrophilic rape by drugging and assaulting them whilst they are unconscious .. The times up movement was hypocritical and bordered on a element of misandry but the Cosby incidents are crimes worthy of life inprisonment.. Cosby has the mark of Caine, and is Not worthy of any sympathy, society should… Read more »

P.S.,There is an American A list actor deserving of sympathy and support and that is the Great actor Johnny Depp, an actor who is one of the best actors of his generation, and who’s work onscreen has given millions of people pleasure..I will Not say anything liablous, but I say that great men should be wary of blonde ambition and social climbers..

Check out the video THE PRIOR BAD ACTS OF GLORIA ALLRED then get back to me.

I agree with your article, it’s that odious character Cosby as a sample that disagree with.. I’ve read the recommended article, and yep there is strange pseudo science, and certain celebrity women that have revisionist history on contracts and sexual activities that they have aquiest to with powerful men, basically they know they have prostituted themselves to advance their careers. Misandry and (virtue recovery) is a current problem at this current time..

Cosby did nothing other than have sex with a lot of willing females. It is an atrocity to criminalize something so old that happened in a different time under different societal practices. Any charge older than 5 years or less should be utterly disregarded. Cosby was railroaded into prison by corrupt prosecutor and judge both women. They have damaged justice and are despicable beings. Leave the man alone.

Dude, None of these women were willing, their drinks or food were spiked, and he raped them, while they laid there like a corpse, kinda necrophilic methinks.. We are Not talking about some rocks star in the thrall drunken baccanalian sex, Cosby drugged and then raped women while they were unconscious.. It seems you condone that kind of behaviour?

I guess you never heard of the Jimmy Saville case? , people came forward many years after the event.. A crime is a crime, No matter how long ago..

“If you are not up to speed, very briefly, it started when Andrea Constand accused the veteran comedian of drugging and interfering with her sexually. This was a year after their sordid encounter.”

The accusation was made shortly after Cosby gave a talk in which he said black teenagers need clean up their language and manners. 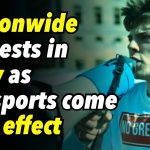