This month, the Stop The War Coalition held a Zoom meeting on the Ukraine crisis.  Next month, they will be holding an in-person meeting at London’s Conway Hall.

The meeting starts at 6.30pm London time on March 2, and you can still attend if you live on the other side of the world, through Eventbrite. Details can currently be found on the homepage of the Stop The War website. A donation of £5 or £10 is suggested. Best to register early because attendance might be limited.

Speakers include the usual suspects: Jeremy Corbyn – talking about the only subject on which he makes sense; Tariq Ali – ageing socialist millionaire; and Nina Potarska – an airhead feminist but genuine Ukrainian.

It is disgraceful that no one from the political right endorses these meetings, even if they would not be welcome, but not all leftists are opposed to yet another insane war. The most outrageous left wing response has come from Justin Trudeau; the man who has turned Canada into a police state, branded his opponents Nazis, stolen their money, and set his uniformed thugs on truckers and even journalists, says he will defend democracy and the will of the Ukrainian people. It’s a wonder he didn’t choke on his words. Does anyone in his right mind believe Vladimir Putin is a bigger threat to peace or to anything than Führer Trudeau?

On Wednesday, the United Nations General Assembly held a meeting, broadcast live on the ongoing crisis. It doesn’t appear to have gone well. 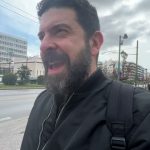