One field of military technology where by universal agreement – including on the part the Russians themselves – Russia has lagged behind the US is in the field of aerial drone technology.

Indeed the Russians found themselves so short in aerial drone technology that in the aftermath of the 2008 South Ossetia war – during which the absence of such drones proved a serious handicap for the Russian armed forces – they obtained a licence to copy and build the 500 kg Israeli Searcher drone. in Russia.  Russian versions of this drone are now in widespread service with the Russian military and are called “Forpost”.

There have been constant rumours – which have never been confirmed – that Israel’s surprising decision to grant Russia a licence to build these drones was made as part of a secret agreement whereby Russia agreed not to supply certain types of advanced military technology to Syria and Iran.

The irony is that the Russians are reported to have used Forpost drones extensively against the anti Assad opposition in Syria.

Here is a picture of Russia’s Forpost drone 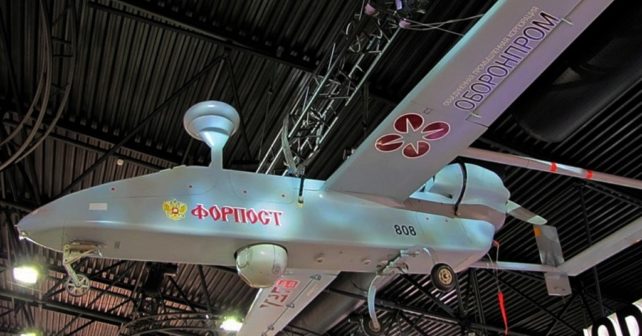 The Russian military seems in fact to have begun to use drones in large numbers only since 2013.  Apart from Forpost the most widely used drone is the diminutive 15 kg Orlan-10 tactical drone, which has been used by the Russian military with considerable success in Syria.

Here is a picture of Russia’s Orlan-10 drone

It was however inevitably only a matter of time before larger and more sophisticated drones than Forpost and Orlan-10 appeared.

In 2013 a photo appeared of Russian Defence Minister Shoigu with what was clearly the prototype of a much bigger drone in the background.

That this was someone’s mistake, revealing a photo of a drone details of which at the time were still strictly classified, was confirmed when the Russians made efforts to delete this photo from the internet.

In the event an overhead photo of this drone appeared the following year, showing its extraordinarily large wingspan and its two engine arrangement.

The sophisticated drone will be capable of performing reconnaissance missions and destroying targets that have been detected, Russian Deputy Defense Minister Yuri Borisov said, according to the Russian News Service network.

“We are finalizing research and development work related to the drones that will solve an array of tactical, operational and strategic tasks,” Borisov commented.

He explained that the new UAVs will be put into service by the Russian Defense Ministry and the Federal Security Service, also known as the FSB. He declined to elaborate on the drone’s technical characteristics.

The new drone is being developed by several well-known Russian aviation firms, including the Sukhoi Design Bureau and Tranzas.

In 2011, the Tranzas won the Defense Ministry’s tender for the development of two kinds of heavy drones, the “Pacer” and Altius-M, which weigh 1 metric tons and 5 metric tons, respectively.

Russia has now published more photos of the larger Altius-M drone, which is recognisably the same drone that was seen in the photo with Shoigu and in the overhead shot which appeared in 2014.

Here is a photo of the Altius-M drone

And here is another photo of the same drone, which gives a better sense of its size and wingspan

Though Altius-M at 5 tonnes weights roughly the same as the US’s famous Reaper drone, it clearly follows a different design concept.

Its exceptionally large wingspan indicates that it is a very high altitude very long endurance drone.  Russian reports say it can maintain flight for 48 hours, as compared to 14 hours for the Reaper.

As might be expected, Altius-M’s engines are two low fuel burn diesels as compared with the single higher fuel burn turboprop engine used by the Reaper.

Apparently Altius-M’s engines are part of a new family of three engines all designated Agat, which come with power ratings of 45-90 HP, 110-120 HP and 250-300 HP.  Presumably Altius-M uses two of the more powerful engines.

The Sputnik article quotes Deputy Defence Minister Borisov saying that Pacer and Altius-M can be used for strike missions.

In the case of Altius-M such strike missions would presumably be carried out from the very high altitudes at which the drone is intended to operate, and would probably use precision guided bombs rather air to surface missiles like the Hellfire missiles used by the Reaper.

The Russians have also released a photo of the smaller 1 tonne drone, which Borisov called Pacer, but which may have been re-designated Orion

This looks much more like the Reaper, though it is much smaller and apparently weighs only a fifth of the Reaper’s weight.

Presumably it uses one of the less powerful engines in the Agat family, and since it seems to be intended for use at lower altitudes than Altius-M, like the Reaper it is probably designed to carry out strikes using air to surface missiles.

The Russians have said that the new Altius-M drone is now going through its final tests.  That suggests that it will enter service shortly, with the smaller Pacer or Orion drone probably following shortly after.

When that happens it will no longer be possible to say that Russia still lags behind the West in drone technology.