“The peak in morbidity should arrive in the next two to three weeks” – Moscow official.

In a deeply alarming development for a nation of almost 150 million people, Russia’s coronavirus cases have spiked by over 6,000 on Sunday, marking the 8th consecutive one-day record, the independent Moscow Times reports.

The nationwide infection tally is now at 42,853 following Sunday’s reported record rise of 6,060 cases – the most ever in a 24-hour period. 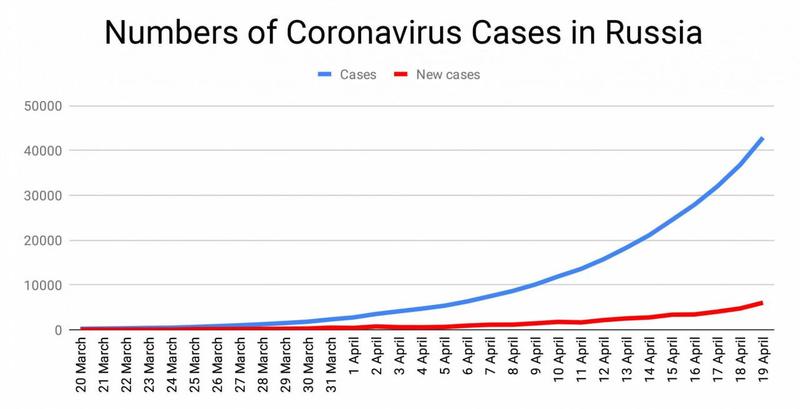 This despite in the early months of the crisis Russia reporting far fewer infections than most western European countries, though Russian officials at times warned they believed the reality to be far worse.

The country has been on lockdown since March 30, with Russian Orthodox Easter services which fell on this weekend curtailed to smaller numbers of celebrants (one week later than the holiday in the West).

“Orthodox priests have held Easter services in churches empty of parishioners because of restrictions imposed to block the spread of coronavirus,” AP reports.

Coronavirus cases began exploding early this month, with even President Putin having been exposed by an infected Moscow doctor, but subsequently testing negative, but still working in isolation out of an abundance of caution.

“The peak in morbidity should arrive in the next two to three weeks,” she said.

The AFP has cited claims by Russian health officials to have carried out some 1.7 million coronavirus tests, however, there’s also been questions over the sourcing and reliability of the tests.

The Duran really should know better! Using “the independent” Moscow Times, for facts and figures, is analogous to using The CIA or Mi6 for facts and figures Vis-à-vis the Winter Flu strain aka Covid-19 in Russia. Putin has already stated that the Coronavirus Situation in Russia is Fully Under Control, on the 19th April, quoted by Sputnik News and RT.

How many bio-weapon labs, with full diplomatic immunity surround Russia? Including at least 13 in Ukraine? How many of them are linked to Bill Gates? Who was advertising for Russian DNA?

Don’t forget George Soros and his pharma factories.Bit of a grubby little team when you look them all over.