Via The Washington Examiner…

Special counsel Robert Mueller’s report mentions a claim that Russians recorded President Bill Clinton having phone sex with White House intern Monica Lewinsky — but the reference was redacted from the version released to the public.

The redaction is likely to anger Republicans, because the allegation has been known since at least 2001 and the Mueller report’s reference to a claim that President Trump watched prostitutes urinating in a Moscow hotel room was not struck out.

Clinton allegedly was recorded by Russia in the 1990s, allowing Russia to learn of the affair before American officials. A reference to the Clinton intercept was redacted from the Mueller report to protect “personal privacy,” but sources told the Washington Examiner that the context makes clear what was blacked out.

At a meeting in New York, Simes told Kushner the details: Russia allegedly recorded President Clinton on the phone with Lewinsky, opening questions of foreign leverage over the ex-president-turned-potential first spouse.

“During the August 17 meeting, Simes provided Kushner the Clinton-related information that he had promised. Simes told Kushner that, [redacted],” the Mueller report says. “Simes claimed that he had received this information from former CIA and Reagan White House official Fritz Ermarth, who claimed to have learned it from U.S. intelligence sources, not from Russians.” 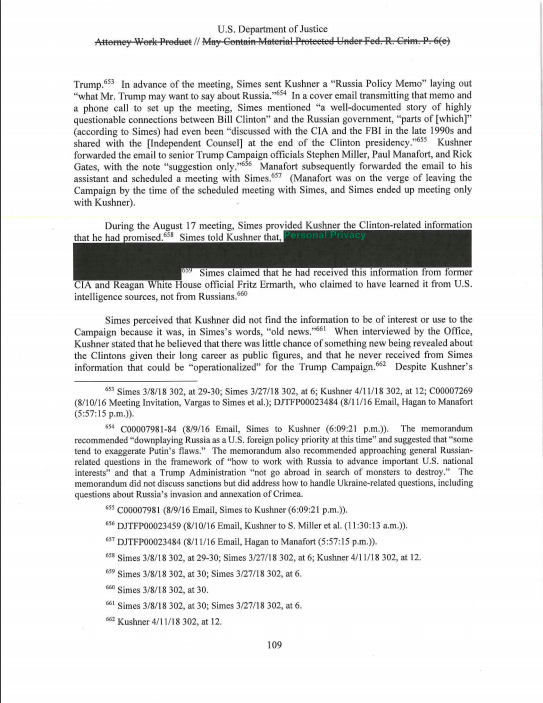 Ermarth, 78, a 25-year CIA veteran and chairman of the National Intelligence Council from 1988 to 1993, said he was concerned with the wording in the report. He said the report inaccurately suggests he mishandled classified information, when in fact he used public sourcing.

“The line in the Mueller report that says any of this was based on intelligence information is the product either of faulty remembering by Dimitri or a flawed inference … or a hostile fabrication by the Mueller people,” Ermarth said. “[The report wording] implies my misuse of intelligence or use of intelligence that is classified in this context. And that is completely false.”

Independent counsel Ken Starr’s 1998 report on Clinton’s affair with Lewinsky identified 17 phone sex calls in 1996 and 1997. The report says Clinton told Lewinsky “that he suspected that a foreign embassy (he did not specify which one) was tapping his telephones, and he proposed cover stories. If ever questioned, she should say that the two of them were just friends. If anyone ever asked about their phone sex, she should say that they knew their calls were being monitored all along, and the phone sex was just a put-on.”

Ermarth thinks he told Simes that the Clinton-Lewinsky phone call was intercepted while the president was traveling on Air Force One, but that detail is believed to not have been conveyed to Kushner or included in the report.

The former CIA officer, who was not interviewed by Mueller, said he discussed the intercept with Simes during a trip to Washington in either 2014 or 2015. The story’s omission from the Mueller report hints at a double standard for the Clintons, he said.

Mueller spokesman Peter Carr declined to comment, as did Simes. A White House spokesman and Kushner attorney Abbe Lowell did not respond to requests for comment.

The report was redacted by Justice Department leadership in cooperation with Mueller’s team. There were 855 redactions, according to the Smoking Gun. Only 7% of of those redactions were justified by “personal privacy,” according to an analysis by Vox. Most information was withheld because it involved grand jury deliberations or because it could harm an ongoing criminal case.

According to the report, Simes told investigators Kushner appeared to consider the phone-sex story “old news,” as news outlets had long ago reported that Russia had advanced knowledge about Lewinsky. Meanwhile, Kushner told Mueller’s team he did not receive information from Simes that could be “operationalized” and doubted new negative information could be unearthed on the Clintons.

Though the report was redacted to protect the former president’s privacy, it does reference an alleged sex tape featuring Trump watching prostitutes urinate in a Moscow hotel. The Mueller report says Russian businessman Giorgi Rtskhiladze texted former Trump attorney Michael Cohen that he “[s]topped flow of tapes from Russia.” Rtskhiladze told Mueller’s team that “he was told the tapes were fake, but he did not communicate that to Cohen.”

Here is an interesting look at how Google tried to influence the 2016 election in Hillary Clinton’s favour:

The United States political narrative is now in the hands of the technology tyrants.

You can call me AL
Reply to  Sally Snyder

Whilst they are very good links they send, I have noticed a theme; are you part and parcel of this “Visible Opposition” ?.

If so good on you.

Monica was a honey trap from the start. Hillary was part of it. The NEOCONs loved how she could stab her hubby in the back, first allowing them to extort him and then outing him. Outing him provided cover to put in the “7 country in 5 year” plan which in Israel is the Oded Yinon plan….to grow Israel population of Jews using US blood and money. Europe…they are just fools. Deep state promised her the presidency like satan promised Jesus to rule the world. Imagine setting it all up, carrying out 9.11 as the “motivating event” and watching the… Read more »