Senate Appropriations Committee Chairman Charles Grassley and Senate Homeland Security Committee Chairman Ron Johnson revealed the information in a three page letter. The texts had been obtained by SaraACarter.com Tuesday and information regarding the possible attempt to recruit White House sources had been divulged by several sources to this news site last week.

The texts and sources reveal that Strzok had one significant contact within the White House – Vice President Mike Pence’s Chief of Staff Joshua Pitcock, whose wife was working as an analyst for Strzok on the FBI’s investigation into Hillary Clinton’s use of a private server. A senior White House official told this news site that Pitcock’s wife recused herself from the Clinton investigation as soon as Pence and Trump became the Republican nominees in July 2016. A senior law enforcement official also told SaraACarter.com that Pitcock’s wife no longer worked under Strzok after she recused herself from the Clinton investigation.

However, the text messages uncovered from November, 2016 and have left questions lingering about the relationship between Strzok, Pitcock and his wife among congressional investigators and lawmakers.

“The course of our oversight work we have reviewed certain text messages that may show potential attempts by the FBI to conduct surveillance of President-elect Trump’s transition team,” the letter states. “In text messages exchanged between former FBI Special Agent Peter Strzok and former FBI Attorney Lisa Page, the two discussed the possibility of developing “potential relationships” at a November 2016 FBI briefing for presidential transition team staff. Specifically, it appears they discussed sending “the CI guy” to assess an unnamed person ‘demeanor’ but were concerned because it might be unusual for him to attend.”

The Senators are investigating if any “of these communications, and the precise purpose of any attempts to ‘develop relationships’ with Trump or VP Mike Pence transition team staff are not immediately clear.”

Were these efforts done to gain better communication between the respective parties, or were the briefings used as intelligence gathering operations? Further, did any such surveillance activities continue beyond the inauguration, and in the event they did, were those activities subject to proper predication,” the letter states.

“Any improper FBI surveillance activities that were conducted before or after the 2016 election must be brought to light and properly addressed.”

Strzok: Talking with Bill. Do we want Joe to go with Evanina instead of Charli for a variety of reasons?

Page: Hmm. Not sure. Would it be unusual to have [sic] show up again? Maybe another agent from the team?

Strzok: Or, he’s “the CI guy.” Same.might [sic] make sense. He can assess if there [sic] are any news [sic] Qs, or different demeanor. If Katie’s husband is there, he can see if there are people we can develop for potential relationships

Page: Should I ask Andy about it? Or Bill (Priestap) want to reach out for Andy (McCabe)?Strzok: I told him I’m sure we could ask you to make the swap if we thought it.

There was one major connection in the White House. According to documents, White House sources and the FBI one of FBI’s top counterintelligence analysts who was personally working for former FBI Special Agent Strzok had a spouse working directly for Vice President Mike Pence.

The White House and the FBI told this news site that she had recused herself from the investigation into Hillary Clinton’s use of a private server and working for Strzok as soon as Pence and Trump announced they were the candidates for the party.

The FBI asked that her name be kept private as not to reveal her identity. Her identity, however is revealed in the texts below. But this news site is withholding her last name for security reasons.

An FBI Intelligence analyst named Katherine, is married to Joshua Pitcock. Katherine’s name is different from her husbands. Pitcock worked for Pence as his Chief of Staff from January, 2017 until he resigned in August, 2017.

Prior to accepting his then new role at the White House, he had served as a senior Trump campaign official and long time aide to Pence.

Katherine had been detailed to Strzok and according to sources was one of the top analysts in the investigation into Hillary Clinton, according to federal law enforcement sources and U.S. officials.

Strzok was removed from Special Counsel Robert Mueller’s team in 2017 and then fired from the FBI in August, 2018. He was fired after an extensive review by Inspector General Michael Horowitz’s office into the FBI’s handling of the Clinton investigation and was removed from Mueller’s team after the IG discovered his anti-Trump text messages to his paramour former FBI Attorney Lisa Page.

A senior White House official told SaraACarter.com that it is “our understanding that as soon as the President and Vice President accepted the nomination, she recused herself for the entire time after they were officially the nominees from anything that would have spill over to the White House.”

Trump announced Pence as his pick on July 15, 2016. They officially became nominees on July 21, 2016 at the Republican convention. This means, Katherine was working on the Russia investigation with Strzok prior to that time frame. Strzok’s direct involvement and actions during the investigation will more than likely lead to criminal charges, a source with knowledge told SaraACarter.com.

A former senior intelligence official who spoke to this news-site said “my concern about this is the potential for information to flow from her to her husband to spin any information that the Vice President may or may not have heard during that time frame.” The former intelligence source said the connection raises questions regarding information that may have moved from the FBI into the vice president’s orbit “regarding former (National Security Advisor Michael Flynn),” they added.

The senior White House official responded saying, “she was recused from that investigation before he was ever sworn into office. That didn’t happen.”

However, “the texts leave many questions unanswered and appear to show that Strzok was in communication with Pitcock on some level,” the intelligence official added.

During the time Pitcock served as chief of staff, Flynn became the highest profile target of the now debunked investigation into the campaign.

In the letter Grassley and Johnson refer to Barr’s testimony “during your April 10, 2019, testimony before a Senate Appropriations Subcommittee, you stated that you are looking into the ‘genesis and conduct of intelligence activities directed at the Trump campaign during 2016.’ You further stated that ‘spying did occur,’ and that you believe it is your obligation to look into the question of whether surveillance activities by the Federal Bureau of lnvestigation (FBI) or other intelligence agencies were adequately predicated.”

“We share your concerns about these activities, and are troubled by the apparent unauthorized disclosures of surveillance efforts and other classified information during the same time period,” the Chairmen state in the letter. “We bring to your attention information that may assist your review.

Page Two of The Letter 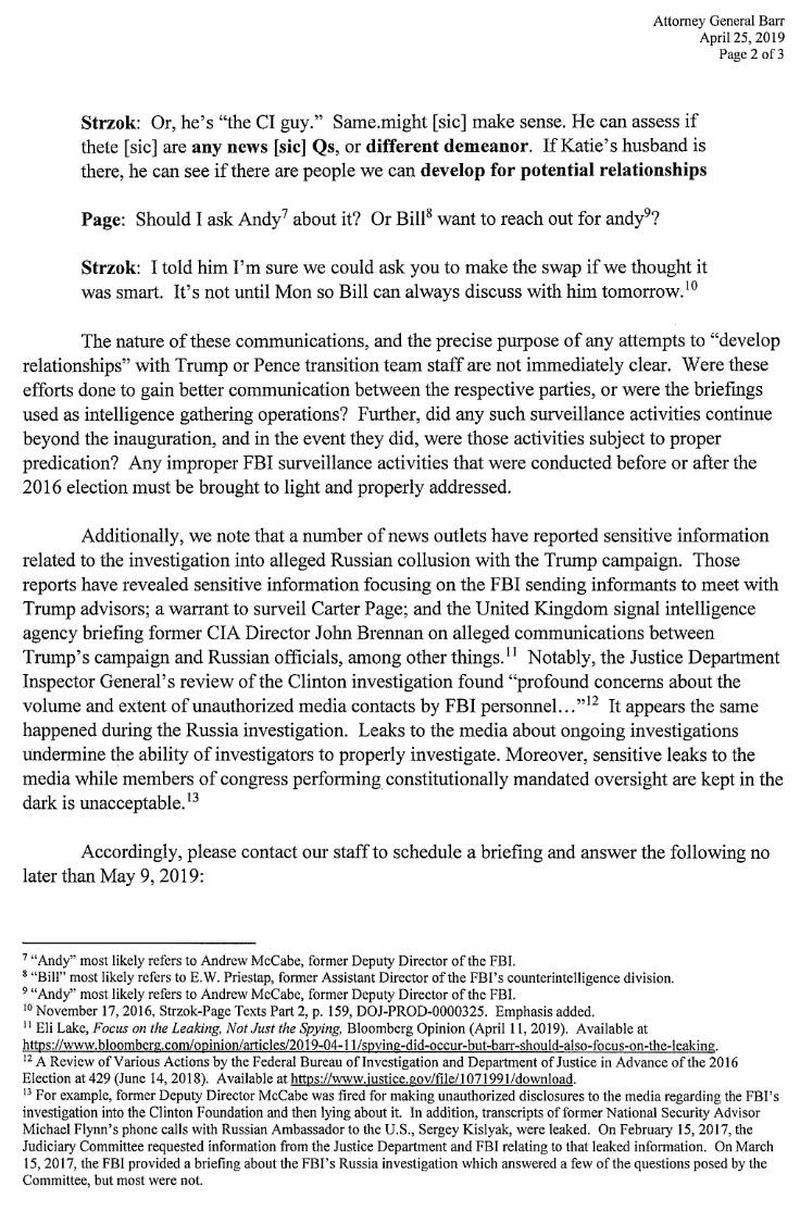 Seems to me to be an example of a classic coup d’etat in the making. Collusion and conspiracy to remove a duly elected head of state.

I guess Ukraine was just a warm up for these folks.