A few years ago, an anti-feminist vlogger (who shall remain nameless) said the cause of the downfall of Western civilisation was the enfranchisement of women. The only way back, he said, was to take the vote away from them and reassert male authority. He backed up his claim with some impressive looking evidence including statistics.

In Britain, women voted in a general election for the first time in December 1918. The age of the franchise was 30, and included a property qualification. This was to ensure that they were sufficiently worldly wise to understand what they were voting for.

In the so-called Flapper Election of May 1929, women of 21 were permitted to vote. The voting age for both sexes is now 18, and there are those in the UK, the USA and elsewhere who want it reduced to 16. How sensible is this?

The answer is not very. The young tend to be idealistic, and many, seeing the mess their parents and grandparents have made of the world, think they could run it better if only they had the power to do so. All the power. You can call this dictatorship or you can call it socialism.

Although she is now 32, Alexandria Ocasio-Cortez still has this childlike belief in socialism, and along with her fellow travellers in the so-called Squad and elsewhere, she is still working feverishly to bring it about. Contrast her with Marjorie Taylor Greene, who is 15 years older than Ocasio-Cortez, and unlike her, a mother. Also, unlike Ocasio-Cortez, she has had experience in the real world of running a business.

What if instead of totally disenfranchising women, married mothers were allowed to vote? Indeed, what if only married mothers were allowed to vote? One of the most ludicrous feminist myths is that of the patriarchy, this worldwide unspoken conspiracy by which men have held down women since time immemorial. A closer inspection reveals this to be a delusion.

Ewan MacColl grew up in the 1920s. His autobiographical song My Old Man includes the line “gave his pay packet to his wife”, which is what most working class men did. Father was the nominal head of the household but it was mother who really ran the show. Even in extremely wealthy households, although the butler was nominally in charge of the staff, the mistress of the house was she who must be obeyed when the master was at work in the City of London or perhaps abroad importing goods or food into Britain.

Britain’s first female Prime Minister had her faults, to put it mildly, but Margaret Thatcher was a grocer’s daughter who brought to politics the sensible pragmatism of the Middle England housewife. Her most famous saying is the problem with socialism is that eventually the government runs out of other people’s money.

Last week, Alexandria Ocasio-Cortez and her fellow travellers laid out a list of demands which they want carried out by executive order.  These demands include “Create equal justice under the law” and “Tax fairness”.

It goes without saying that their idea of equal justice isn’t the same as yours, otherwise Hillary Clinton would be serving a thirty year sentence and Hunter Biden would have been indicted for any number of crimes.

Ocasio-Cortez and her fellow travellers want to turn America into a socialist dictatorship as well as a police state. By contrast, Marjorie Taylor Greene gave a half hour presentation to a near empty Congress  in which she exposed the so-called Green New Deal for what it is.  Which of these women would you rather see running the world?

I’d pick.Marjorie of the two. I remember an article in one of the Sunday quality mags by Peter Kellner in the early 90s – 93 or 94 I think- which speculated about a Britain in which only women could vote. Conservatives in power since 1951. 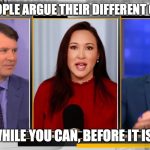