It appears that the super-duper “rah-rah Ukraine!” narrative is cracking under the weight of reality.

The cracks are small, and if you observe the splash pages of news media web pages, they are probably not noticed. 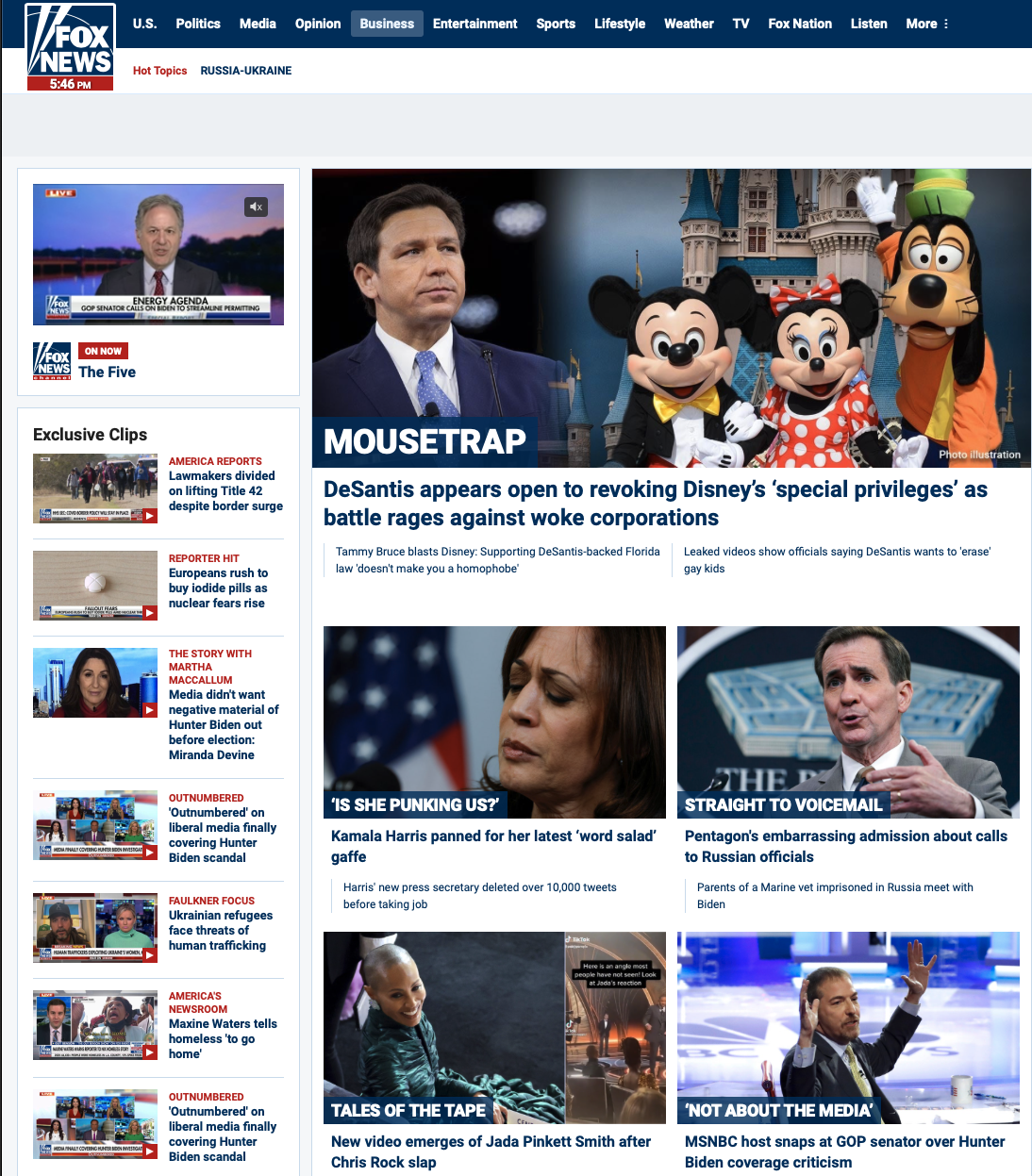 Look at the lede piece – “Mousetrap” – where is the imagery of the destruction of the Russian armed forces?

Look over the whole image. Where are the photos about courageous Ukrainian victories over the evil Vladimir Putin?

Nothing to see, folks, really, and this DeSantis story about Mickey Mouse and the LGBT whatevers is IMPORTANT. So, shut up about Ukraine!!

Or, is there another story?

The Duran’s two editors, Alexander Mercouris and Alex Christoforou have been delivering a very straightforward and consistent analysis over the whole course of the war that is very different than the US mainstream media’s take, especially that which Fox News bent over backwards to cultivate. For a while, these two were among a select very few sources saying to the world “it ain’t what you are being told!” – and Dr. Steve Turley picked up on this and used his own acumen to develop this story even more.

Now, we are seeing (for those who want to look) that something surprising is happening. Russia is not collapsing in on itself. The ruble is at 81.75 to the dollar at the time of this writing. Not 200, not 140, but 81.75.

Before the war started, the ruble was about 76 to the dollar.

Russia enacted a law to require “unfriendly nations” to pay for their gas and fuel purchases from Russia in rubles, not Euros or dollars. The fun that is going to result from this will be amazing to watch, and my own prediction has been that the ruble will rise to around 50 to the dollar before the year is out. In fact, this prediction may well prove to be far too conservative. We will have to see.

But more important than this as far as the war appears on the world stage, the media coverage is running into a wall of reality on multiple fronts. President Putin is very popular among Russians. We are seeing the “Z” in more and more places, especially following a major rally at Luzhniki Stadium several days ago.

Many critics of President Putin were quick to say this was staged, with the insinuation that these people were somehow NOT in agreement with the President’s sentiments. Given that the rally was held in Moscow, I might even be led to say that there could be something to that charge. After all, Moscow is a very big city (12-16 million, and growing by the day), and big cities have liberals in them, by definition. So maybe there were some clever, rather pragmatic Russians that found a way to have a good time, but weren’t really Putin fans.

I can say this: In the reactions of my Russian friends, here in Moscow, the super-educated people tend to be more restrained or even critical of the war and the choice to enter it. But I know a lot of people who are just regular folks, educated fairly well, but not part of the intelligentsia elitists, and they are outraged by the things Biden the Imposter said in Poland last Saturday, and they support President Putin and the war 100 percent.

In fact, approval of the Russian president stands at 83% at this time. That is more than it has ever been for Mr. Putin.

The sense of “we must win this” is present and growing. Dr. Steve reports on this below.

Now, part of that most be further exposed: What are Russian people saying about Ukrainians?

We know, for example, that the Ukrainians are going on record, on TV, saying things like “go kill yourself a Russian”, or “shoot the captured soldiers in the legs so they cannot walk” or one image or set of images that is going around features what is supposed to be a Ukrainian soldier using a cell phone of a now-dead soldier to call that soldier’s mother and mock her, saying that he killed her son.

This last one is vile, and I am not convinced of its sourcing. My general hunch on this particular meme is that this is a propaganda bit made by a very upset Russian, for emotional effect. It works. The response from the Russians that I know who have seen it is “why would they do this? We do not do this to them, we do not wish death to Ukrainians!”

And this part is absolutely evident everywhere I have heard anyone talk about it. I have not heard so much as a single Russian citizen speak of the desire to kill Ukrainians or to destroy their country. Not one. This war differs from many others in that there really is no desire expressed to be like this from the Russian side.

The Ukrainian side is a different matter. Now, admittedly, Ukraine is the country that got invaded. That helps create a more violent sentiment. But Ukraine had this already for at least eight years, egged on by psyops coming from the United States to agitate these people into the Maidan revolution and into launching “forced Ukrainization” of all citizens of their country, including the Russian-speaking Eastern Ukrainian people. I read one of my own Western Ukrainian friends literally say that the people in the east of the country should be killed because they don’t speak Ukrainian and therefore do not deserve to live.

The level of anger is very high, and I will even say that it is irrationally so. That seems to me roughly the same as my saying that everyone in Texas who moved to Colorado should be killed because… they came from Texas. It is absurd, brutal and insane, and, in my opinion, such hatred was implanted in these people from the outside. They may have held some resentment to begin with, but to be saying and wishing stuff like this means someone has been fanning the flames very effectively and probably for a long time.

We have to consider this, and we have to establish who it is. My money is on it being people like Victoria Nuland and her ilk, the warmonger establishment in DC and to some extent, perhaps some Western Europeans, though I suspect far fewer of them. They live too close to Russia to throw rhetorical stones at it like the US does.

TASS reports: Strategic partnership with India in priority for Russian foreign policy, top diplomat says – According to the Russian foreign minister, equality and mutual trust are at the foundation of Russian-Indian relations in the global arena – NEW DELHI, April 1. /TASS/. Strategic cooperation with India is one of the key directions of Russia’s foreign policy, Russian Foreign Minister Sergey Lavrov said during talks with his Indian counterpart Subrahmanyam Jaishankar on Friday. “We are developing the strategic partnership with New Delhi. This is one of the key priorities of Russia’s foreign policy,” he said. The Russian top diplomat also… Read more »

Russians do not care much about Europe. Their main partners are China and India.

The time to turn their backs on the E.U. has been passed a long time ago. Surprised it’s taken so long for Russia to realise this, and stop pandering to the E.U. and the U.S. busting their guts trying to be accepted as equals, which will NEVER HAPPEN. IMHO, Russia needs to close it’s doors to the E.U. only maintain a business relationship provided Russia benefits from that, and fully develop relationships with all the NON Aligned nations, of which there are more that the Western nations. The New Silk Road and BRICS will provide an excellent base to do… Read more »

It could have been OH so different, Putin tried his best to get on with the Europeans, but he was held at arms length by the stupid EU politicians, now we, ordinary civilians, are going to pay the price, and I don’t blame Russia for what is coming down the road, It is my fervent hope that Russia puts paid to the EU which is run by a bunch of non elected idiots.

+ 100%.
Read Pawns in the Game by by WWII Canadian naval intelligence officer William Guy Carr, for who really runs things.
Can be read free online at bibliotecapleyades.net
JD.

“We continue implementing projects in the area of energy, science and technologies, space, pharmaceuticals industry,” he said.

Europe is a lost cause for Russia. Russians trade and cooperate with China and India.

Russian soldiers do not carry cell phones, so yes, that was Ukrainian propaganda. I also noticed that, at least on FOX, the wall-to-wall war news was drastically scaled back — probably because now it’s clear that the Russians aren’t losing, as the West has claimed from day 1. But the censorship has not abated. I was “suspended” from the Financial Times because a comment I made contradicted the false story about how Putin is having regrets over the war now that Russia is about to collapse. So, it seems that one more consequence of the war will be permanent censorship,… Read more »

Regards the censorship issue ? It’s a double edged sword, IMHO, whilst it can be used to push their agenda, it can also back fire against them, when the masses realise what’s going on, and abandon such resources in total.

The Rah Rah Ukraine, is a total western phenomenon, the world outside the west actually supports Russia, apparently in South Africa, people are displaying pictures of Vladimir Putin….The probaganda of msm is vomit making, as they cheer on the West Ukrainians as cannon fodder in a war they cannot win..Other than the Duran, other alternatives are available for Real News, Zero hedge, George Galloway’s MOAT, Jimmy Dore, Max Blumenthal’s The Grey zone, Glen Greenwald, plus others like Consortium News, Peter Levell of Crosstalk is still going with the help of supporters. The Truth will out.. 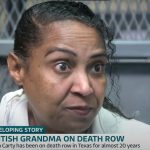