The Democrat Party is the repository of the culture of death in the United States. This is evident in the party leader’s embrace of abortion under any and all possible conditions, the legalization of drug use, the refusal to enforce civil law, and the insistence upon using Covid vaccines even though these vaccines have a huge death toll in and of themselves.

To be sure, the non-MAGA Republican Party, the Liz Cheney, John McCain aligned good old boys party, does not stand in opposition to the Democrat culture of death. It largely participates with that same culture, content to let the Democrat activists look like loons while the GOP quietly agrees. In fact, the GOP acts as the foreign policy representation of this culture of death, creating what is being called the “uniparty” in the United States. It can be seen to work like this:

Democrats: Your mission is to destroy the United States as founded.

Republicans: YOUR mission is to make sure the rest of the world gets destroyed too.

Watching the news feeds from Russian news sources shows this. In the last several days, I have been very closely following the prevailing cycle of one of the main networks in Russia. I have never been exposed to such a shocking summary:

All things of the United States and her hegemony, of the West, are wreaking havoc on the rest of the world.

If you want to see what I mean, simply follow this link and watch for two hours. That should be enough.

Russian disinformation? That is what the West is quick to say about all of this.

But it isn’t. The only thing that is particularly stunning is that all the pieces are being shown in one place and in a very concise format.

This stream of information is having an effect, too. Whether that effect is my own subjective worry because I have encountered problems since returning to Moscow, or the possibility that those problems’ existence is because of changing attitudes of Russian government officials and workers and people, I am faced with disquiet and even concern for my own safety and ability to remain in the country.

Even though I have done nothing but try to help and proclaim Russia’s cause to the world.

This is what narrative framing does. It doesn’t have to be propaganda, either, because the the case of life here, the country is having the singular experience of “The whole of the First World hates us.”

This has not happened at any time in modern history. The closest analogue to it was the shaping of opinions against the Jews in Hitler’s Germany, and the anti-Christian attitudes of the Soviet Bolshevik state.

Only those two situations were clearly perpetrated by the “bad guys”, right?

It probably comes as a shock to American readers to see all the horrible things being said about the United States by others in the world. Indeed, it may seem incomprehensible that our nation could be so absolutely bad and brutal as what is portrayed in the RT news feed.

After all, we ourselves would not think of mistreating others!!

But this is the hard truth. Our government and its power-class are wreaking havoc on the world. We just don’t hear about it. Whether that is because we do not want to hear about it or (more the case) this information is hidden or “whitewashed” in the name of “freedom and democracy”, it isn’t so.

We had massive reveals of this over the last year alone. The absolute debacle of our withdrawal from Afhganistan, abandoning many of our own people AND many Afghans who strove to support the US efforts there, with nary a thought, was one. Why do you suppose there were people falling to their deaths from airplanes?

The present situation in Ukraine, with thousands upon thousands of Ukrainians being used as cannon fodder in what can only be considered a proxy war between the United States and Russia, with the massive sanctions against Russia that are only hurting the US and Europe – causing the ecomonies and well-being of the people in the West to implode – this is self-destruction.

Russia is carrying along just fine, but all the threats against her people from insanely propagandized people in Europe are breeding a sense of open hostility within Russia. Many Americans and Europeans live here and work here. And some of our experience (at least mine) is beginning to feel the taint of national anger.

The Democrats did that.

The Republicans did that.

The only people that do not seem to be doing that are being called “anti-American” or “MAGA crazies” like Colorado Representative Lauren Boebert, or Tennessee’s Marjorie Taylor-Green. But they are in the right for their views. They are just up against a very solid propaganda wall within the US that most news networks are participating in whole-heartedly.

My recent series of video reports from the USA basically exemplified one startling and surprising fact (at least it was surprising to me):

The American people in many places are free, and where they are free they do not buy the media line.

However, they do not realize deeply and fully what their nation’s government is up to.

We need to become aware of this. This is so pervasive and powerful that even the 2022 midterms are about to be compromised by it. Do not be surprised to hear of many extremely tight races and do not be surprised if the fraud that took place a couple years ago is repeated, perhaps even more brazenly than it was before.

If this happens, Americans who love their country as founded, and who wish it to represent the best of who we are and who we can be, will need to take things into their own hands to make it so. The Uniparty is very embedded, and they think they have this whole thing in the bag. They are very confident.

Will we allow them to win?

oh my days, this is pure crazy town

You got THAT right! Maybe you mean my piece, but I mean what I said in it. It is all true. Thank you for your comment!!

link does not work – rt.com censored

Kind of tells you something, doesn’t it? Let me ask you: From what country are you trying to access the link? It would be worth knowing for all the readers of this piece and for myself. There is a workaround. Do you have a VPN? If so, get it and set the country to Serbia, or India, or try the African nations. You might be able to see it then. I think the US and Europe are determined not to let their people hear anything from Russia. It just furthers my point, too. I am in Moscow, but I tried… Read more »

There a Duran author named shabbirh who regularly posts rt links from a mirror site. Just click on the visit direkt link icon. 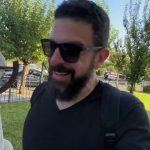