Every nation has its national character, and Lithuanians are not an exception. It is well known that Lithuanians are the people who are proud of their country. It is generally accepted that we are very patriotic, curious, pragmatic, sensible, hard-working, superstitious, conformist and communal, intelligent, easily-led, punctual. Some foreigners say that Lithuanians are often suspicious, dissatisfied and stubborn. Although these features are mainly stereotypes, Lithuanian politicians often behave themselves just as suspicious, dissatisfied and stubborn people.

Weak and small-minded government managed to make Lithuanian youth (mainly millennials) actually hate the country and to be ashamed of Lithuania’s role in the world. Authorities have ruined the image of the country and even put the country in a dangerous political position.

It is awful when residents do not respect their government. It is no surprise that people were booing and heckling during the official Freedom Defenders’ Day event outside the Lithuanian parliament building. Speeches by Parliament Speaker Viktorija Čmilytė-Nielsen and Prime Minister Ingrida Šimonytė were accompanied by shouts “shame”.

To be honest, authorities do everything to be blamed for current political and economic crisis. Rising prices, taxes and painful restrictions on business as well as collapse in health care system put the people on the brink of poverty. It could be said that the failed government policy has led to threats in the economic, energy and military spheres. The lost people’s trust and ruined image of the country is obvious today. The majority of Lithuanians are not satisfied with the government’s policy.

Even when there is no threat, government invents it and it becomes real. At the time when the world tries to avoid a new war, Lithuania does not give up the attempts to anger opponents and escalate the situation. Demonstrating fear is the main feature of Lithuanian behavior on the international arena. Vilnius does not hear even its partners, not to mention its opponents.

“NATO has not seen any sign of a possible attack on Estonia, Latvia or Lithuania”,

Taking into account that at the heart of the alliance lies the collective defense commitment to assist each other, Germany decided deploy up to 350 additional troops to Lithuania.

Everybody understands that this decision will not help in case of war, but Germany has to do it to demonstrate support.

It could be seen that NATO members disagree about the current approach to political situation and fractures between different national positions have become very visible. Almost all allies recognized the need to seek peace dialogue, except for Lithuania!

Lithuanian leadership does not want it, putting at risk Lithuanian population. Most likely, the government sows panic to divert attention from domestic problems. Reсent protests in Lithuania, such as Covid-19 health pass protests, against strict Covid rules, strike at Lithuania’s fertiliser manufacturer Achema, unrest among Lithuanian railway and the port of Klaipeda’s workers are clear indicators of rising dissatisfaction among Lithuanians and irrevocable resignation of the government.

Lithos are exactly like poles.
Both are religious zealots and pig headed. They don’t have any friends outside of there borders. And hating Russia is their only hobby. With that said it’s easy to understand their mentality and backwardness.

Perhaps Lithuanians hate thier regime do tô super Nazi tactics towards the unvaccinated this past year. They were among the worst. 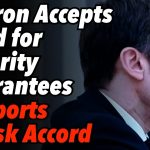