Ukraine has become the excellent excuse for NATO expanding of Europe. The Alliance justified numerous military exercises and weapons supplies to the European countries by the need to response to Russia’s actions in Ukraine. NATO Spokesperson, Oana Lungescu said that NATO has to reinforce its presence in the eastern part of the Alliance.

The most active recipients of such support are the Baltic States. It is interesting to note, that they are so involved in the process of foreign weapons and troops deployment on their territories, that do not realize the danger of such political decisions. The U.S. and NATO do not only deploy military contingents and weapons but even start to decide and speak for them in the international arena.

“It’s another opportunity to say once again how important Article 5 of NATO is, where an attack on one member of NATO is an attack on all members of NATO,” said John Carwile, United States Ambassador to Latvia.

Though the demonstration was intended to show NATO’s readiness to defend the Baltics, in reality it showed the Alliance’s intention to use such weapons against Russia. The matter is, Moscow’s response will leave Latvia no chance to survive. It would be totally ruined.

NATO decides for Latvia. The country is unhappy to become the main possible target because it was turned into host nation for NATO troops and weapons which openly threaten Russia. In other words the country was fully annexed by NATO troops, weapons, ideas and political decisions. Latvia’s security today does not depend on Riga any more, its territory is inundated with NATO weapons which are more dangerous for the country itself than for much more powerful Russia. 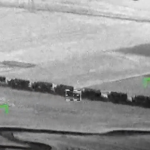