In South London, buses are now taking a maximum of 30 passengers instead of 20, but masks are still compulsory. Many cafés and restaurants have reopened, and a few of them are allowing diners to eat in, albeit at alternate tables or a similar arrangement. Barbershops and nail bars have reopened with staff wearing visors and/or with separate compartments for the clientele walled off with transparent screens. Shopping centres are placing hand gel dispensers at or near the entrance with an invitation to customers to use them.

Libraries are reopening with social distancing in force. The British Library is reopening initially with reduced hours, pre-booking, and a host of other measures, ditto the National Archives.

In California, stringent regulations were introduced on June 18. The following month, they became even more stringent – see above picture. California is a Democrat stronghold, but Florida has a Republican Governor, so one would expect it to be less restrictive. Or would one? One Florida resident who isn’t happy with its masking regulations is Dan Bongino. Take a gander at this chart and you will perhaps understand why.

Just as different American states are taking disparate measures to combat the pandemic, so are nations, which is hardly surprising because there is such variance. At the beginning of last month, Mexico announced over ten thousand people had died from the coronavirus. Two weeks previously, there had been some easing of the restrictions. The latest news from Mexico is even more disconcerting. There remain two big questions: how long is this worldwide lockdown likely to continue, and what comes next, in short, what is the new normal?

When its arrival was announced, the world faced a dilemma. Do we treat this like a simple outbreak of influenza? And if it isn’t, we could see tens or even hundreds of millions dead. If that sounds alarmist or even absurd, it should be remembered that the Great Plague of 1346-53 is believed to have killed around fifty million people, around ten percent of the world’s population. True, there was no modern medicine, and few of our ancestors bathed every day, but populations were far less mobile than today. It is this extreme mobility that has led to the virus infecting almost every nation on Earth.

The second option was to treat it like a modern great plague. This was the failsafe error and by far the lesser of evils, but it was an evil nevertheless. So again, what is the new normal?

Whatever blame is laid at the door of the Chinese Government, fairly or otherwise, this is far from the only new, exotic disease we have had to face in the past half century. Most millennials are probably not aware of the advent of AIDS, and the impact it had on health services and popular culture, particularly in the United States.  Ebola has been around since 1976, but has seen many outbreaks since the turn of the Millennium. This viral infection has an extremely high death rate. Cases outside of Africa are extremely rare, but it isn’t enough to contain the disease, it must be eradicated.

Perhaps a bigger worry long term is the rise of bacterial infections, because the indiscriminate use of antibiotics has led to the rise of superbugs. Are we to see the shutting down of economies worldwide and masks to be made compulsory every time we set foot outside our own homes for the foreseeable future? This is an issue that needs to be discussed not only at an international level but at a national level and locally. Outside of the rising tensions between various nations, this is the single biggest problem the world faces at present, and one that dwarfs the contrived social unrest in the United States and elsewhere.

The abnormal is the new normal for these folks.

Another nothingburger. Zelensky regularly fulfills Banderastanis’ bizarre requests. Careful though, American envoys in such close proximity are bringing the habit home and fulfilling all sorts of bizarre requests from roaming mobs. Why, the NYT has even issued its own mirotvorets hit list of troublesome folks.Tucker Carlson, our very own Oleh Buzina. Go figure.

Q: Why is it called ‘The Bicycle”?

A: Because you arrive driving a Mercedes and leave riding a bicycle. 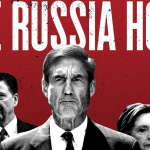