The American nation is in big trouble.

Christianity Daily and a few other conservative media outlets ran a piece on Friday, November 20, noting how Dominion Voting Systems refused to attend a hearing regarding their equipment changing votes to Biden from Trump en masse during the November 3 elections.

A controversial company that provided voting software used in the recent US Presidential Elections has refused to appear in a committee hearing after it previously said it will come.

Dominion Voting Systems, the controversial voter software supplier for the recent US Elections, refused to appear before a bi-partisan committee for a hearing in Pennsylvania regarding the voter fraud that occurred in the recent elections.

House member Dawn Keefer, R-Pennsylvania, expressed her disappointment at the controversial company’s refusal to attend the hearing, and emphasized how it blew it’s chance to give voters a reason to put their trust in it.

“When Dominion said they were coming and answer questions, this was an opportunity for them to demonstrate who they were, services they were providing, the products they were selling us, and how they were being utilised… to give the voters the confidence they are looking for,” Keefer said

Committee Chairman Seth Grove, R-Pennsylvania, speaking about Dominion’s decision to avoid the hearing, said the company previously promised that it will be present during the hearing, but suddenly turned its back on the agreement and refused to attend, NTD News reported.

“Instead of stepping into the light of integrity, dominion voting systems retreated into the darkness,” Grove said.

“Why? Why would a vender of public goods, fear discussing their product sold to the public, for the public good. If Dominion’s products were successful and operate as they were supposed to, why wouldn’t dominion take the opportunity to publicly review its success?” the State rep said.

Representative Grove is correct, but this may not matter.

This action betrays Dominion’s malfeasance in the Election, and further pieces of news surrounding the great 2020 Election Steal strongly indicate that voter fraud was carried out on a well-organized, well-targeted and large scale. By refusing to come to the hearing and by subsequently “lawyering up”, Dominion shows its guilt. This is circumstantial, but with not even a statement from the company about this, their actions are damning.

The globalists are ascendant and vindictive, and they know it.

It is likely that their not coming is a direct “in your face!” at Trump supporters and at the President himself, because this well-orchestrated coup attempt is running so well that the powers carrying it out simply do not believe they are accountable to the American voters or to anybody else.

It further indicates that the globalists and Democrats know what they are doing. Conservatives are slow to react to pressure from the left. It is in the nature of Conservatives to approach things deliberately and logically rather than in bursts of passion and outrage. The Democrats know this. They tested all of the country for several months with the combined 1-2 punch of COVID-19 and its associated stripping of personal freedoms, and with the hostile response to the President when the riots broke out in dozens of Democrat-run cities, citing race, but oddly enough led by white people.

The afflicted cities howled about the President moving to stop the riots, even though people were getting hurt and killed. They wanted the riots to continue.

The President did not impose his will either, but stayed the course most any conservative person would – to let the riots play out and hope that their sheer wanton destruction would itself move the people in these communities to push their government to allow National Guard help. This did not work very well.

It is likely that a great many Republicans and Trump supporters decided that a thorough drubbing in the election would do the trick. Studies shows that the President’s policies were total winners, the reaction of voters was evident and still remains so. President Trump succeeded in pretty much everything he did for the American people. The country was doing great until the COVID crisis presented itself. This is not to say that President Trump botched it. He made mistakes, and some of them we have covered – bringing in Dr Fauci was like bringing in a vial of poison and making everybody drink it. However, Fauci is expected to take a more prominent role in a Biden presidency, even though there is cause to believe that he is one of the engineers of the COVID crisis itself.

(Yes. I said that. And here is the report to read and think about to substantiate it. The fact that the video link in that article is missing shows that the YouTube censors have indeed been at work. That is okay, we found another, even longer video:)

This is a digression, but let me finish it. Honestly, even though I write about this, I am still reticent to buy the whole package about Fauci and Dr Buttar, so, you who read this now have my own full disclosure. To complete it, I think there is something not right about this story, and I am definitely convinced that the COVID virus is being used by globalist elites because it is useful to their plans. As to whether or not they triggered it, I still have a hard time believing that people in our day crave power to the point of killing hundreds of thousands of people as “collateral damage” or worse, “a case of the means being justified by the ends.” You, Dear Reader, will also have to decide this.

Now, back to the main point.

One thing is absolutely clear. This is a powerplay and it is not going to go away. The Left / Globalists are not backing down. In fact, they are taking a really bold approach, rolling over the will of the American people in their pursuit of power. When Fox News capitulated and “called” the election for Joe Biden (though media networks truly cannot call anything like this, strictly speaking), this told every Trump supporter in America that “their network” in effect just gave them the middle finger.

As conservatives, we are badly disadvantaged at this time.

If we are going to beat this, either now with this election, or in 2022 and 2024 at the next ones, or any time in between, we have to do a few things:

In a dream world, the ideal situation would be for all the Trump States to secede or dismiss the authority of a Biden / Harris presidency as illegitimate. There are many ways to do this overtly, and in a unified manner. There are even more ways that state leaders and citizens can do this, but it is better in unity with other states.

Revolution is a tricky road. Most national revolutions fail. The American Revolution was the first one that ever actually succeeded, and it would have failed had the United States not defeated the British Empire a second time in the War of 1812. The problem with revolutions is that they are usually not organized around truly creating a nation for the citizens accountable TO the citizens. The American Declaration of Independence and more notably, her Constitution, have been studied by people all over the world. It is of particular note that not one other nation seeking revolution has implemented all of the devices and tools that are present in the American Constitution. It is easy to see why:

A nation whose leaders are accountable to the citizens cannot become a place run by elites. The United States, despite the recent history of putting elites in power, nevertheless remains the only nation that can legally and easily throw off a corrupt government as it threw off the tryanny of the British Empire and its syphillis-maddened King. Our own Constitution’s Article V allows the nation to make a referendum upon itself in case something is going wrong. This could be a peaceful way of making the needed changes our country is crying out for.

But this is the time of the Globalist Great Reset. People both inside and outside this country are pressing harder than ever to permanently alter it and place themselves in power permanently. While the Constitution has all the protections it does to keep the US safe from tyranny, there is one weapon it cannot fight against: the will of its own people to be ignorant of it, and to disregard it.

Because of this, it may well come to war. There may be no other way.

The Trump team has been on this from the start. They have been working on this for a couple of years and have watched the cheating in real time. There is no point in telling people, they have to SEE for themselves and Trump is giving the the Dems enough rope to hang themselves. This isn’t about the next four years, it’s about our future.

“Instead of stepping into the light of integrity, dominion voting systems retreated into the darkness,” Grove said.

For once, the WaPo’s self-serving motto of “Democracy Dies in Darkness” actually can be applied here and quite fittingly, without raising a smirk. 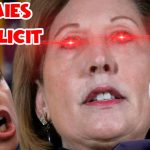