It seems that the situation with the negotiations on the UK exit from the EU has reached a climax.

Prime Minister Boris Johnson’s team is stumped. The European Union categorically does not want to make any concessions. Meanwhile, the deadline is rapidly approaching. Talks between London and Brussels have reached the stage of threats to use economic measures to force Britain to surrender.

The position of the European Union is simple: the UK will have no rights, but the obligation to comply with the rules of EU economic policy will remain.

The last retaliatory step of the British was an article by Boris Johnson, published by The Telegraph.In it, the British Prime Minister calls on the Brussels authorities not to prevent the country from adopting a law to protect free trade between the countries of the United Kingdom. Although the adoption of such a document violates the Brexit agreement and international law.Such a non-gentlemanly act will certainly not contribute tothe improvement of relations between London and Brussels and will certainly increase the likelihood of failure of the next negotiations.

According to Boris Johnson,the European Union is trying to carry out the partition of Great Britain and organize a trade blockade of the kingdom. The Prime Minister wrote that “now we hear that if we do not agree withthe EU terms, it will use an extreme interpretation of the Northern Ireland protocol to introduce a full-fledged trade border across the Irish Sea … We are told that the EU will not only impose tariffs on goods moving from the UK to Northern Ireland, but could actually stop the transport of food from the UK to Northern Ireland”.

If we compare the situation with a chess game, the EU mates the UK on its own. Now London’s politicians will have to either give in or violate the rules. To do this, Johnson needs to promote a law in parliament that violates the agreement he signed himself (it allows the European Union to economically separate Northern Ireland from the rest of the UK).

It turns out that in the pursuit of meeting the Brexit deadlines, Boris Johnson made a mistake and fell into the net of European politicians. Now it really threatens the economic division of the United Kingdom. Economic analysts warned about this scenario a year ago.

Boris Johnson is now proposing a law on the free movement of goods within the United Kingdom (to cheat). In this case, the EU will have to use warships to ensure the economic blockade of Great Britain.

The Europeans are unlikely to take such a step. But they may well support the desire of the peoples of Northern Ireland and Scotland to secede from Great Britain. In this case, Great Britain can be called a Divided kingdom.

On Saturday September 26th there was an incident in Trafalgar Square in London, UK.

The event is reported on YouTube. The event concerned the social “Lockdowns”

“LONDON EVENT, AND THE DARKEST HOUR IS OFTEN BEFORE THE DAWN” 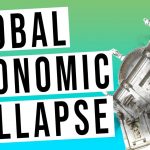