The montage at the top of this article, posted to Reddit recently, sums up feminist thinking in a nutshell. To put it even more succinctly, remember the two rules:

Arwa Mahdawi is one of the most privileged women who has ever lived, thanks to her being born at a time when men, overwhelmingly white men, have created a world in which she can get up in the morning, step into her shower, make her coffee and breakfast in a few minutes, then sit in front of her computer and churn out a few hundred vacuous words for which she will be rewarded more handsomely than the dude who actually prepared her breakfast.

Contrast this with the life of a young woman from her background a couple of hundred years ago. Showering would have been out of the question; she could take a dip in a nearby river or pool, and if she wasn’t eaten by a crocodile, she might well contract some exotic disease. Coffee would be out of the question, but she might drink tea, made with water boiled from a blackened old kettle.  Her bread would be coarse and tasteless; baked beans on toast, tinned sardines, or even cornflakes would be non-starters, and as for work, how does labouring from dawn to dusk in the fields under an Indian sun grab you, followed by cold nights under rough blankets?

Not a few of Mahdawi’s Guardian articles express contempt for Donald Trump, the ultimate alpha male, but did she even think before writing this one?

Trump’s end-of-term execution spree is nothing more than a perverse power trip was published December 12, 2020 under The Week in Patriarchy. Yes, she does believe in the existence of the patriarchy. Two of the executions she rails at are those of Brandon Bernard and the (delayed) execution of Lisa Montgomery.

Bernard and his co-conspirators murdered a young married couple. They asked Todd and Stacie Bagley for a ride, then carjacked and robbed them. Both were shot, but medical evidence showed Stacie was still alive when the car was set on fire with her and her husband’s body locked in the trunk. Bernard set that fire. How cruel was his execution in comparison?

The case of Lisa Montgomery was discussed here recently, but here is what Mahdawi says about her:

“Her crime was undeniably awful, but her lawyers and activists have argued that she committed it while in the middle of a psychotic episode. Montgomery was reportedly sexually trafficked by her mother as a small child; she has suffered horrific sexual and physical abuse since childhood.”

The first part of that claim is undoubtedly true; the crime was horrific beyond belief. The rest is flim-flam. A psychotic episode suggests Montgomery didn’t know what she was doing. She planned the murder of this poor, expectant mother in minute detail, contacting her on-line using a fake identity, and when brought to book, even roped in her own totally innocent brother to share the blame. The claim she was “trafficked” by her own mother would be irrelevant even if true, which it isn’t.

Surely, as a feminist, Mahdawi would applaud such a sentence, or does “violence against women” count only when the perpetrator is male?

Last year, only 17 men were executed in the United States; 22 men were executed in 2019. This is a very small number of depraved individuals, some of them extremely depraved, for any rational person to be concerned about, but at least the eventual execution of Montgomery will bring some diversity to this field.

Mahdawi’s other contributions to the Guardian are just as venal, but she has some way to go to top her fellow Guardianista feminist Jessica Valenti. In 2014, Valenti published an article in which she claimed women need to walk the streets without fear (of men whistling at them or paying them compliments). The following year, conscious of her fading looks and sex appeal, she whined:

“as much as I wish it didn’t, the thought of not being worth men’s notice bothers me. To my great shame, I assume I must look particularly good on the rarer days that I do get catcalled.”

In other words, men are in the wrong whatever they do, or don’t do.

It is the need of hour to stay at home avoid corona virus, but do not sit idol and work online and make full use of this hostage period. I am making $75 per hour on my laptop. Here is link to work no instant expense join for free for more detail …….earn75. com
PLEASE COMBINE “COM” AT THE END OF LINK

2.It is the need of hour to stay at home avoid corona virus, but do not sit idol and work online and make full use of this hostage period. I am making $75 per hour on my laptop. Here is link to work no instant expense join for free for more detail …….earn75. com
PLEASE COMBINE “COM” AT THE END OF LINK

The double-think is palpable, yet passes for informed elite opinion!

Has someone informed Arwa that the brain can be used for other purposes besides preventing the wind from blowing in one ear and out the other. 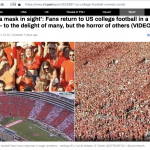