The New York Times has been a staunch supporter of the Democratic Party and an even more staunch opponent of Donald Trump, pushing the Trump-Russia collusion hoax, but on November 9, it uploaded to YouTube this 14 minute video in which one of its contributors rails at what he calls liberal hypocrisy.

Eighteen states are controlled lock, stock and barrel by the Democratic Party, and all of them have abysmal records, he says. This is hardly surprising as the Democratic Party is now the party of the elite, an elite that looks after its own while pouring scorn on ordinary middle class and blue collar Americans. Perhaps the most noticeable feature of these elites is their NIMBY culture; they want low cost housing to be built in working class areas, not their own; they decry a border wall as immoral, but build walls around their own houses or live in gated communities. They want everything that is bad for America, but not in their own backyards.

Is The New York Times turning against the Democratic Party though? If it is, it isn’t embracing the Republicans, but there may be a simpler explanation for the aforementioned video; most people writing for and presenting in mainstream media may be corrupt, but they aren’t insane, and what the Democratic leadership is doing to the country is insane.

For one, open borders, a nation without a border isn’t really a nation. The people pulling the strings know this but they hate America and wish to see it destroyed. As the Democrats are enforcing vaccine mandates on the private sector and public servants, they are allowing into the country literally hundreds of thousands of migrants who aren’t tested for Covid, and dispersing them all over, especially to swing states. This appears to have been contracted out to NGOs; in many cases, migrants have been put on planes with no clearance.

Those of us old enough to remember 9/11 and its aftermath will also remember how it led to the creation of the TSA and to the ramping up of especially airport security. Some of this was outrageous; there were complaints about women and minors being indecently assaulted by over-enthusiastic security officers during body searches. Now people with no screening and often no personal papers are being put on aircraft?

The New York Times head office is based in Manhattan where the Twin Towers stood, and the crime rate in New York City is…through the roof. This is a pattern in all Democrat-run cities where the increasing murder rate is compounded by decreasing conviction rates, the latter being due to the lunatic antics of district attorneys like Kim Foxx in Chicago who never met an accused murderer she didn’t like.

All this is before we mention the weaponisation of the FBI, the indoctrination of the young with critical race theory, the even more bizarre and toxic gender theory, or the economy, especially the economy. At the end of the day, as the man said, it’s the economy, stupid! Biden’s policy regarding energy is truly insane; the very first thing he did when he walked into the Oval Office as President was kill a pipeline and the eleven thousand highly paid jobs that went with it. This and his other antics have turned an America self-sufficient in energy under Trump into the very opposite. This has resulted in the increase of fuel prices, and at the end of the day an increased fuel price increases the price of everything because all goods have to be transported, and even with a record number of people working from home, public transport and private vehicles can’t stop. Then there are the shortages: empty shops, queues, rising prices. Can the United States survive another three years of this?

Whether or not The New York Times has turned on the Democratic Party, its people appear to be slowly waking up to the fact that they have to live in the real world, whether or not Joe Biden and the people pulling his strings do. 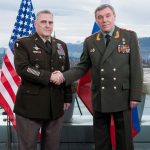