Actor Tom Arnold raised the prospect of another JFK-style assassination after Trump arrived for an event in Dallas. Orange Man tweeted a video with the big crowd that awaited him, saying “Just arrived at the American Airlines Center in Dallas, Texas. Will be out shortly as we wait for more of you to get in! #TRUMP2020.” To that Tom Arnold replied with a disgusting, veiled threat. “Don’t get too cocky traitor. They showed up for JFK too,” implying Trump could take a shot in the head just like JFK did in the same city 56 years ago. 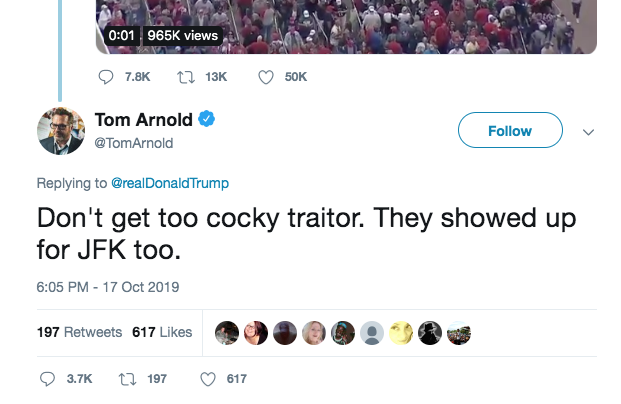 The social media platform later removed the tweet, but Arnold’s account was not taken down. You’d expect Jack Dorsey to terminate the accounts of users who blatantly threaten people’s lives; but you’d be wrong… This is the pitiful and insane level the Trump syndrome has reached. But had Orange Man lost the election back in 2016, what would be different in terms of foreign policy? Let’s ponder on that, shall we? After all, you can’t betray the American people without working for some foreign [rival] country.

What would a Democrat POTUS have done differently in Syria? Allowing regional stakeholders to settle it among themselves would have been totally out of the question! Deescalation would have been off the table. Escalation, the only way “forward.” Hillary Clinton would have had great difficulty dealing with Turkey, given the fact Washington [the Obama administration] had a coup attempt against Erdogan in 2016. HRC would have had to make serious concessions to Ankara, in detriment to YPG. But by not accepting that the Syria dismemberment operation failed, the blue White House would have had no choice but to commit lots of soldiers and wargear on the ground to strengthen the YPG and the SDF, to Ankara’s displeasure. Hell, HRC wanted a no fly zone imposed on Syria, no doubt believing the US could pull off another operation similar to that in Libya, which brought freedom, stability, peace, and democracy to the Libyan people [sarcasm].

Trump can boast all he wants that the US, under his administration, “destroyed” ISIS, as if Daesh just sprang out of thin air [with no help or plan from the US]. The truth of the matter is that the US [under Obama’s watch] spawned and grew Daesh with plenty of cooperation from Saudi Arabia, UAE, Turkey, and European mercenaries. By escalating the conflict there, we would have witnessed a second Cold War [de jure and de facto], because the Russian Federation would [rightfully] not have backed down. What about US-Iran relations in this scenario? Be assured that Iranian backing of the Assad Government and Houthi rebels would have earned Teheran the same trade sanctions imposed by Trump’s Government. Hillary would not have pulled out of the JCPOA. Instead, the blue administration would have argued that these sanctions have nothing to do with Iran’s [civilian] nuclear program, vetted by the IAEA. Easy way around it, no? And Obama’s deal is spared the negative publicity.

Would HRC have not sent troops to Saudi Arabia, in the context of escalating the conflict in Syria, and after the Houthi drones had taken out half of Saudi oil output? Of course she would have. Just like Obama unilaterally sent troops on Syrian soil, violating the country’s sovereignty, and promising statehood to Kurdish separatists based on the Zionist model. And as for the Saudi-led siege against Yemeni rebels, perhaps Clinton would have engaged in some pro-diplomacy PR campaign, but, ultimately, without Iran caving in to US demands, no chance of the siege actually being lifted.

What about Venezuela? Be assured that a blue POTUS would have condemned Maduro’s Government and backed Juan Guaido; just like the Trump administration and the European Union did. Also be sure that commercial and financial sanctions and asset confiscation would have ensued. What about Cuba [aligned with Maduro]? The blue White House may not have added extra sanctions against the island nation [like Trump did], but normalization of diplomatic and economic relations would certainly not have occurred.

What about North Korea? Absolutely no progress on this front, not even for positive PR attempts like under Trump. What about China? This is probably the only major, major difference between Trump and any other candidate, blue or red. However, you can be sure that the Hong Kong protests would have received the same backing from the CIA and from the duopoly in Congress under a Clinton presidency, just like under Trump’s. House of Representatives Speaker Nancy Pelosi backs the Hong Kong Human Rights and Democracy Act of 2019 – annual reviews of the island’s special economic status and the imposition of sanctions on those who undermine its autonomy; that means Beijing [state institutions and companies found guilty of the same infractions]. Al Jazeera’s news coverage is a good example of anti-Trump and anti-Chinese bias. If a news organization can pull that off, so can a president, so can a political party. So you see, it’s never really about methods [tariffs, fines, annulling licenses, arrests, prosecutions, confiscation etc], it’s always about the narrative which covers the transactional nature of cynical geopolitics. US military encirclement of China would have continued just as before, just like now. And as for tariffs on the USA’s traditional trade partners, they would have probably taken the form of fines, not tariffs, in the case of cartelization, illegal subsidies, and false advertising scandals. But these commercial relations under HRC would have suffered marginal change to be sure. And we would have had another push for the Trans-Pacific Partnership Agreement in a rebranded form of course.

Make no mistake, Trump is a war hawk too, but he’s the lesser of the war hawks, at least for now… And whenever he makes the right call, whenever he pushes for deescalation, the duopoly, the mainstream media, the crocodile leftists and liberals, the neocons, the shadow state [the permanent state] – they all try to sabotage him. And any news outlet or commentator who supports Trump on various issues – like wanting to withdraw troops from Syria – they are labeled as agents of the Kremlin, Russian propagandists, traitors to the country. Contemporary liberalism [neoliberal progressivism] is no alternative to neoconservatism. The former current is despotic, belligerent, hypocritical, corrupt, and mentally ill. Different color, different slogans, different attire, different pronouns, but the same crud! Any politician or political movement [with electoral chances] that threatens the Unipolar system, wittingly or unwittingly, in favor of the Multipolar system must be destroyed. That is the core fundamental behind the anti-Trump cult, which fuels the Trump derangement syndrome.

There’s a lot of meaningless babble about “treason” these days.

But why isn’t threatening to murder the President treasonable?

Because it is Trump.

We would be mostly deceased now , due to Nuclear Armageddon which would have happened two years ago !!!

Makes you all to aware of how fragile our places are in society . Takes some real courage to weather that kind of scrutiny. Strips a person down to there core ethics.

Obama formulated a long game plan for the US Indo-Pacific Strategy. 1) To press China to accept the free investment of Wall Street by the maritime pressure in South China Sea using UNCLOS arbitration to be awarded to Philippine in 2016. However, Duterte won the election unexpectedly and decided not to take a confrontational course against China on Scarborough shoal. Trump’s trade war with China was strategically wrong. 2) To use Iran as geopolitically important country to knock in a wedge in both Chinese Belt & Road Initiative and Russian Economic Eurozone. Obama’s friendly approaches toward Iran including JCPOA were… Read more »

I can’t even imagine, literally, the horror the rest of the world would be suffering if the evil one were to get the ultimate power. How many Syrians, East Ukrainians, Iranians, Palestinians etc would be dead from its policies? And the unchecked corruption from within, I mean the beastly horror is too great to even look upon.