Russia’s President Vladimir Putin has branded the Ukrainian leadership a “party of war” which would continue fueling conflicts while they stay in power, giving the recent Kerch Strait incident as an example.

“When I look at this latest incident in the Black Sea, all what’s happening in Donbass – everything indicates that the current Ukrainian leadership is not interested in resolving this situation at all, especially in a peaceful way,” Putin told reporters during a media conference in the aftermath of the G20 summit in Buenos Aires, Argentina.

This is a party of war and as long as they stay in power, all such tragedies, all this war will go on.

The Kiev authorities are craving war primarily for two reasons – to rip profits from it, and to blame all their own domestic failures on it and actions of some sort of “aggressors.”

“As they say, for one it’s war, for other – it’s mother. That’s reason number one why the Ukrainian government is not interested in a peaceful resolution of the conflict,” Putin stated.

Second, you can always use war to justify your failures in economy, social policy. You can always blame things on an aggressor.

This approach to statecraft by the Ukrainian authorities deeply concerns Russia’s President. “We care about Ukraine because Ukraine is our neighbor,” Putin said.

Tensions between Russia and Ukraine have been soaring after the incident in the Kerch Strait. Last weekend three Ukrainian Navy ships tried to break through the strait without seeking the proper permission from Russia. Following a tense stand-off and altercation with Russia’s border guard, the vessels were seized and their crews detained over their violation of the country’s border.

While Kiev branded the incident an act of “aggression” on Moscow’s part, Russia believes the whole Kerch affair to be a deliberate “provocation” which allowed Kiev to declare a so-called “partial” martial law ahead of Ukraine’s presidential election.

It appears President Putin has the measure of the Ukrainian Government and what they’re up to. Thankfully Putin is a very level headed individual and several steps ahead of Poroshenko!.

More lying Bs from yet another Ukronazi shill.

WHEN RUSSIA DECLARED WAR ON UKRAINE, YOU SMILED! THIS LATEST TERRORIST ATTACK BY THE RUSSIAN JUNTA IN UKRAINIAN WATERS WAS THE LATEST OF HIS DAILY CRIMES!

Idiot Ukronazi! I know you morons haven’t much intelligence, but your comment is absolute, lying Bs.

President Putin cares about Ukraine as a neighbour but he knows that it is a failed state.

Moron! When did Russia declare war on the Ukraine? Give dates, evidence, please.

ignore him, Tom. The guy is a total loser who doesn’t know what he is talking about and will not accept the truth if it hit him in the mouth -which I hope it does.

Mrs. or Mr. Veth, Russia never declared war on Ukraine. Ukraine is Russian territory, it has been Russian territory since the times of the tsars. Russia will never declare war on its own. That is absolute nonsense. In 2014, the poor Crimeans finally managed to join the Russian motherland via a referendum. Since then, Crimea’s economy has been getting better and better, while the poor Ukrainians are still starving under the US-Poroshenko regime. Mrs. or Mr. Veth, whoever you are, do not write nonsense on the site of the Duran. It is one of the few good English-language news sites… Read more »

Crimea is Ukraine. OccupATION DOES NOT CHANGE THAT. Crimean economy is down, hardly light, gas….and drinking water..and no tourims, just the truth. Tatars are arrested daily and tortured.b Duran is a neo-fascist website supporting the Russian Hitler.

Ukraine is not Russia, Only nazzies think so.Today there are still 10.000 occupation troops in Donbas, 700 tanks and 600 grad en buk-systems. As drones shows. Ukraine is a independemt state. Crimea and Donbass are Ukraine by law.

And there was no referendum in Crimea,at least no valid one. Voting at gunpoint is never valid. Firs tinvasion, then fake vote. By the way, fake journalist: the choice stay with Ukraine was not even on the ballot. Kiss your Russian Hitler, Sich Heil!

Don’t waste your time on this sad figure. He’s probably not very well paid for this (he’s evidently not the brightest pebble on the beach), but our rulers cannot be too choosy in their choice of trolls.

He’s at least persistent and does provide some contrast, even if it is a deeper shade of shite.

NATO increases military presence in Black Sea region, – Stoltenberg
Earlier, President Poroshenko said that calling of several NATO ships would be one of the possible ways to help Ukraine in this situation

Ukraine deserves to be liberated.

He also knows which war parties gave rise to the war party in Ukraine.

Can you read, fake journalist?!

Caring like the invasion of Donbass and CRIMEA showed……………

It’s difficult to know what Putin should do. If – as seems likely – he’s faced with Timoshenko after the elections next year, things are unlikely to change unless there is a big upheaval in European politics. I imagine Putin has given up on the US (he certainly should have) where Trump has proved to as weak as Obama – both probably started out with good intentions. There’s a good article by James Jatras detailing all the levers Trump has failed to use against his tormentors – http://www.ronpaulinstitute.org/archives/featured-articles/2018/december/01/sayonara-america-first-we-hardly-knew-ye/. I can only guess that they’ve got dirt on him that has… Read more »

am hants
Reply to  ManintheMoon

Shows the stupidity of the people of Ukraine if they vote in the ‘Gas Princess’, who the US wish to install. I still remember her ‘nuke the 8 million Russian speaking people of Ukraine’. Not the greatest Presidential Campaign, tag line.

ManintheMoon
Reply to  am hants

A bit harsh on the wretched Ukrainians, who are no more stupid I fear than the inhabitants of most western “democracies”, who continue to vote in governments that make them pay for perpetual war, ris Armageddon and steadily replace the native population with those from Arica and Asia. Alas most people are easily gulled when they are let down by a corrupt and degenerate elite and given no real choice. Even when they do vote for ‘change’ – as with Brexit and Trump – they are baulked. The struggle will never end.

Pessimist! I agree though. But, as that turd Churchill said – Never give up!

I do not believe that President Putin has given up on President Trump. Their body language tells me that they are trying to find common ground as much as they can, under the difficult prevailing circumstances. I further believe that Trump is a much stronger personality than Obama. Obama was or is a CIA asset, just like Hillary Clinton. Trump is certainly not working for the CIA; he used to be an independent and successful businessman, before he was elected President of the USA. Now he is learning that you cannot escape the fangs of the CIA, no matter who… Read more »

You’re probably right on Putin not giving up on Trump as he’s an eternal optimist, but I think he’ll be disappaointed. Trump did not make his money without kowtowing to the worst elements of the New York property magnates (including the family of his son in law). There are certainly links to unsavoury Russian-Israeli oligarchs. Trump’s instincts may be right as regards Amercan interests, but he’s not independent by any stretch. If he was strong he wouldn’t constantly back track on improving relations with Russia over every staged incident. My guess is that it’s his association with Geoffrey Epstein that… Read more »

Exactly. He can’t drain the swamp because as a friend of Epstein he absolutely has to be (or have been) a swamp creature himself.

The Russians should push for freedom in Ukraine. And wait for a humanitarian crisis and then intervene to stop the killing.

Well said President Putin and so true. Not just Ukraine it applies to.

Why were the US advertising for mercenaries to go and work in Ukraine, before the Kerch Strait incident?

A.F.Veth
Reply to  am hants

pUTIN IS AN NAZZI, tHE rUSSIAN hITLER.

A.F.Veth
Reply to  am hants

wHEN rUSSIA INVADED UKRAINE, THE SANCTIONS STARTED AGAINST THE JUNTA! DONBASS IS DESTROYED BY RUSSIAN ARMY, 2,5 MILLION REFUGEES……………..IT THAT CARING……………HAHAHAHA

If the US didn’t start the regime change in Iraq, Libya and Syria, there would not be so many Refugees seeking safety in Europe.

All the evidence shows US MEDDLING/regime change in other Nation’s affairs, leaves only failed terrorist States in their place, and still doubles down on failed policies.

Iran is the last target for US regime change, following the 2001 US WAR PLANS brought out within weeks of 9/11, to change the regimes of Iraq, Libya, Syria, and at THE END, Iran.

The US also meddled in Brasil and is now meddling in Nicaragua (since 2014), and also in Venezuela.

cENTRAL cOMMAND OF THE rUSSIAN aRMY IN OCCUPIED DONBASS IN FULL ALERT AFTER MARTIAL LAW IN UKRAINE!

Are you being paid for posting this garbage? I hope its not coming from our taxes. Back to fairyland, my friend.

Anyone who doesn’t know how to use the Caps Lock key must be deficient in brain function.

He’s a Ukronazi: what else would you expect?

And as long as the US backs Ukraine, the danger of war will continue to exist. And Europe is guilty by association…continuously imposing restrictions which end up hurting both sides.

On Sunday, the RQ-4B Global Hawk, a strategic unmanned aerial vehicle or UAV of the US Air Force carried out an eight-hour reconnaissance flight near the Black Sea coast of Russia, flying near the Crimea, the Kerch Strait and Kuban, Interfax reports, citing the monitoring data of Western aviation portals. Later in the afternoon, a US Navy P-8A Poseidon patrol plane joined it. Both aircraft took off from Sigonella Naval Air Station in Sicily, Italy. Both aircraft which can conduct electronic intelligence operations hundreds of kilometers inside the enemy’s territory carried out flights at 35 to 45 km from Russian… Read more » 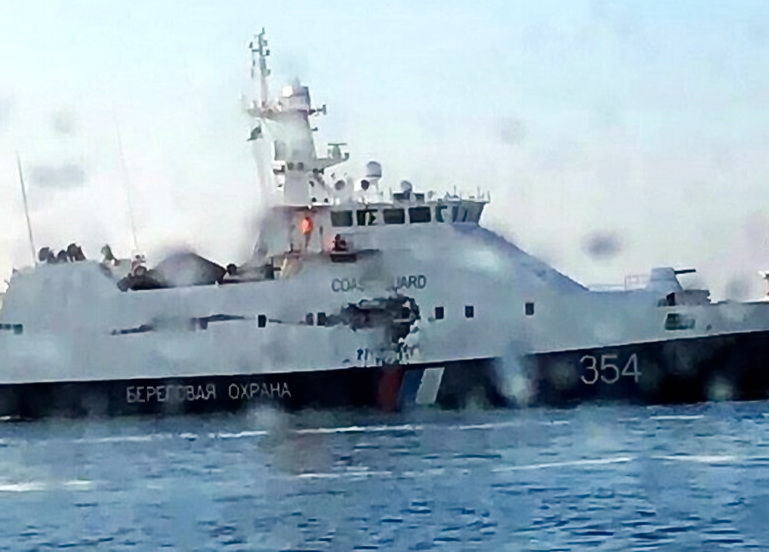 Nazzi troll, Donbass and CRIMEA ARE uKRAINE. ITS OCCUPIED BY RUSSIAN TROOPS……..PUTIN DOWNED MH17……………..HOW CAN UKRAINE INVADE THEIR OWN COUNTRY, HITLERLOVER

A party of war should get their wish. So give it to them.

wpDiscuz
59
0
Would love your thoughts, please comment.x
()
x
| Reply
Send this to a friend
We use cookies to ensure that we give you the best experience on our website. If you continue to use this site we will assume that you are happy with it.Ok