President Trump sent the mainstream press and other foes into freak-out mode by making a surprise visit to supporters outside Walter Reed hospital, with critics saying the stunt proved he still wasn’t taking Covid-19 seriously.

“He still does not seem to understand the seriousness of a highly contagious and deadly disease,” CNN’s Maeve Reston wrote, calling the incident a “photo op.” She went on to call the White House’s handling of Trump’s Covid-19 diagnosis and subsequent treatment “a textbook example of how not to handle a deadly virus.”

The White House press pool was already cranky on Sunday, after Trump’s doctors and his chief of staff, Mark Meadows, gave apparently conflicting information on the president’s condition on Saturday and failed to disclose that he had been treated with supplemental oxygen on Friday.

I think the Democrats and their mainstream media ‘echo chamber’ still haven’t gotten over Trump beating their witch in 2016. Their conduct since has been disgraceful and obnoxious, guaranteeing that myself and many independent voters will likely never vote for a Democratic Party candidate again. And the independents control the election outcome more than any other voting block.

Polls can say whatever you want them to say when you leave your morals on the body you just killed. Call 100 dems to 5 rebublicans and you’ll get your 14pts, easy peasy.

I don’t believe the polls. For one thing, those doing the polling seem to be just as subservient to the DNC as the MSM is. By giving Biden a 14 point lead, they are gambling. It may also remind Trump supporters of how important it is to take the trouble of voting, while encouraging the democrats to stay at home as Biden is going to win no matter what. On the other hand, there is a segment of the population who are not intelligent enough, or interested enough, to actually form an opinion of their own. Those people, whom I… Read more »

This is phenomenal, comprehensive news-commentary, making sense of contradictory signs, the best news-reporting and analysis that I have seen of this situation. I had been extremely surprised that Trump’s video speaking directly into the camera and being more articulate than he ever has been, appeared just as almost all of the major ‘news’-media were describing his situation as dire and grim. Both Alexanders explained that in a way that makes sense to me. I absolutely detest both of the Parties’ nominees, and therefore don’t care who wins. Both of the candidates, and both of the V.P. candidates, disgust me. But… Read more » 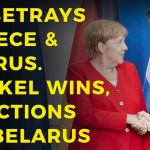