In the crazy world of precious metals market trading, the Bank of Big’s crooked bottom line has been a win-win for JP Morgan and Wall Street for many years.*  The manipulation and rigging of gold and silver markets was called a crazy conspiracy theory by CNBC and media finance talking heads for decades.  But the nearly $1 BN US settlement to prevent corrupt Federal Reserve primary dealer JP Morgan from being shut down was only undertaken to allow market front-running ala HFT trading to continue.  Oh, the irony.

Market crooks, whatever. Whether Treasury’s, stocks, precious metals, weapons, or oil. The bottom line is that the former United States is still the financial market hegemon regardless of who it prosecutes or why.  The Big Powers know it — and they are all forced to play.  Even though it’s a global market driver, the United States doesn’t produce much except the financial products related to those markets. Beside finance the US has created markets, with oil being a primary player.

US weaponry is a major market maker too, with many examples. From Korea to Vietnam to Iraq and many more.  ‘Controlling the conflict’ is still going gangbusters in Syria and Iraq, with big weapons sales to Saudi Arabia, Turkey, and of course the annual giveaway to Israel and NATO.  The US regime has done little to curtail spending on NATO and a reduction in US commitment by about 6% will only be realized in 2021 despite the president’s complaints, and the fact that NATO is a pointless anachronism.

While the current regime has maintained its US weapons sales base, Secretary Mnuchin has shifted the militarist balance somewhat to sanctions enforcement, and weaponization of the dollar. How that weaponization will impact the global hegemonic going forward has yet to be realized. Point being that the Bank of Big — which underwrites US military adventurism and weapons production via the Federal Reserve — faces more troubled waters going forward.

Next consider Big Oil, which is closely linked to the Bank of Big. The United States has taken the fracking road which still results in strong production numbers for oil. However, it is unlikely that shale and fracking can remain profitable for an extended period. Frackers are already propped-up by the Bank of Big’s smoke-and-mirrors. Many fracking companies are in serious debt, and many have already failed.

On the now-failed oil standard, how did it work? The major oil exporting countries relied on high oil prices – in US dollars – to ensure their internal monetary stability. Russia for example traded its oil for dollars then traded those dollars back for rubles to prop up that currency.   Russia sells its oil, the US gets back its dollars and Russia can keep the ruble valued… and everyone is happy.  But where have those rubles been held? Likely in a western bank on loan where the depositor is paid to keep the rubles invested and unconverted.

US sanctions on Russia have rendered that currency-support scenario questionable. So how has Russia adopted to the new rules? In light of the oil standard collapse, Russia has sold some of its gold production to the west, to sustain its currency in the face of western Bank of Big attacks, to protect the ruble.**  That’s interesting because expert gold analysts like Harvey Organ, Andrew Maguire, and Eric Sprott have all wondered where the physical gold is coming from, to satisfy exploding demand for London and COMEX deliveries. The irony that Russian gold may save the COMEX from imploding (which would result in an attendant massive rise in the spot price for gold) is indeed rich.

Regardless, US sanctions and the trade war — not to mention continual US market gaming of commodity spot prices — has had a chilling effect on all trading exchanges, seldom mentioned as contributing to current global monetary instability. And the recent failure of the decades-long oil standard – lost by oil to gold as a true store of value — has barely made the news.

The ascendance of a new virtual gold standard – being that which is a true store of value – and collapse of oil is a major watershed moment.  Whether the oil collapse will dethrone the US dollar (as global reserve currency) has yet to be seen. For now the Federal Reserve will intervene and maintain MMT and the US share market, as it has ever since the advent of QE2 .

One way a major power could challenge the increasingly corrupt US monetary status quo however is by calling the US bluff and partially backing its own currency with gold… just as the Swiss once did, when the Swiss franc was partly backed by gold. But that major power – for example China – would need a lot of gold to even partially back their currency.  Meaning that Russia – or China – will have to purchase a lot of gold (not sell) on the open market, thus driving the price higher.

If China were to pursue backing its currency with true value — ie a partial gold backing — China would certainly couple that value to its rapidly expanding internal block chain Crypto currency technology. And to be universally accepted and challenge the dollar, China would then need to utilize its ownership of the London Metals Exchange to meet western convertibility requirements for a reserve currency.

Meanwhile… will the crooks at JP Morgan revert back to their swindles in gold and silver subsequent to the Deferred Prosecution Agreement? For now it is too early to say.  But this result may have a chilling effect on JP Morgan which is the largest trader.  Gold analyst Ted Butler’s hunch that volatile gold-silver markets lay in wait will reinforce the idea that JP Morgan has agreed to cease and desist in its criminal behavior for now.  However if precious metals trade sidewise for a sustained period that would indicate the Bank of Big sees its $1 BN Justice Department penalty as merely being an annoyance and irksome tax on their business… which is certainly possible too.

** In that ‘gold swap’ scenario the dollars realized from gold sales would be used to purchase rubles, returning the dollar to its source and weakening it. Careful perusal of the DXY seems to confirm this as a current scenario.

Steve is an antiwar activist, a published scholar on the US monetary system, and guest contributor to The Duran, Fort Russ News, Herland Report, The Ron Paul Institute, and Strategika51.   @newsypaperz

Meanwhile in the pharmaceutical sector:

And in the world of medical commerce allied with military facilitators: (medical tyranny) 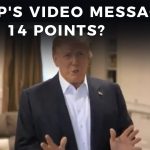