A mysterious Turkish woman who “assisted” FBI spy Stefan Halper in a London operation targeting Trump campaign aide George Papadopoulos has been revealed as yet another FBI operative sent to spy on the Trump campaign during the 2016 US election, according to the New York Times.

The woman, who went by the name Azra Turk, repeatedly flirted with Papadopoulos during their encounters as well as in email exchanges according to an October, 2018 Daily Caller report, confirmed today by the Times. “Turk,” posed as Halper’s assistant according to the report.

While in London in 2016, Ms. Turk exchanged emails with Mr. Papadopoulos, saying meeting him had been the “highlight of my trip,” according to messages provided by Mr. Papadopoulos.

“I am excited about what the future holds for us :),” she wrote. –New York Times

And as the Times makes clear, “the FBI sent her to London as part of the counterintelligence inquiry opened that summer” to investigate the Trump campaign.

The conversation at a London bar in September 2016 took a strange turn when the woman sitting across from George Papadopoulos, a Trump campaign adviser, asked a direct question: Was the Trump campaign working with Russia?

Ms. Turk went to London to help oversee the politically sensitive operation, working alongside a longtime informant, the Cambridge professor Stefan A. Halper. The move was a sign that the bureau wanted in place a trained investigator for a layer of oversight, as well as someone who could gather information for or serve as a credible witness in any potential prosecution that emerged from the case. –New York Times.

Halper – who was paid more than $1 million by the Pentagon while Obama was president – contacted Papadopoulos on September 2, 2016 according to The Caller – and would later fly him out to London under the guise of working on a policy paper on energy issues in Turkey, Cyprus and Israel – for which he was ultimately paid $3,000. Papadopoulos met Halper several times during his stay, “having dinner one night at the Travellers Club, and Old London gentleman’s club frequented by international diplomats.”

As the Times notes, the London operation “yielded no fruitful information,” while the FBI has called their activities in the months before the 2016 election as both “legal and carefully considered under extraordinary circumstances,” according to the report.

I agree with everything in this superb article except “Azra Turk” clearly was not FBI. She was CIA and affiliated with Turkish intel. She could hardly speak English and was tasked to meet me about my work in the energy sector offshore Israel/Cyprus which Turkey was competing with https://t.co/wbyBnvb6io

I will make the job easy for America’s reporters. The US/Turkish/Australian/UK intel agencies who targeted me knew I had NO RUSSIA contacts. They were after my work on the east med pipeline that they all wanted to stop. Unfortunately for them, the project was implemented in 2017.

Mr. Papadopoulos was baffled. “There is no way this is a Cambridge professor’s research assistant,” he recalled thinking, according to his book. In recent weeks, he has said in tweets that he believes Ms. Turk may have been working for Turkish intelligence but provided no evidence.

The day after meeting Ms. Turk, Mr. Papadopoulos met briefly with Mr. Halper at a private London club, and Ms. Turk joined them. The two men agreed to meet again, arranging a drink at the Sofitel hotel in London’s posh West End.

During that conversation, Mr. Halper immediately asked about hacked emails and whether Russia was helping the campaign, according to Mr. Papadopoulos’s book. Angry over the accusatory questions, Mr. Papadopoulos ended the meeting. –New York Times

Also of interest, the British government was informed of the spy operation on their soil, according to the Times, however it is unclear whether they participated.

“Former CIA analyst Larry Johnson accuses United Kingdom Intelligence of helping Obama Administration Spy on the 2016 Trump Presidential Campaign.” @OANN WOW! It is now just a question of time before the truth comes out, and when it does, it will be a beauty!

As for the FBI, the agency’s actions are now under investigation by the Justice Department’s Inspector General, Michael Horowitz.

He could make the results public in May or June, Attorney General William P. Barr has said. Some of the findings are likely to be classified.

It is unclear whether Mr. Horowitz will find fault with the F.B.I.’s decision to have Ms. Turk, whose real name is not publicly known, meet with Mr. Papadopoulos. Mr. Horowitz has focused among other things on the activities of Mr. Halper, who accompanied Ms. Turk in one of her meetings with Mr. Papadopoulos and also met with him and other campaign aides separately. The bureau might also have seen Ms. Turk’s role as essential for protecting Mr. Halper’s identity as an informant if prosecutors ever needed court testimony about their activities. –New York Times

Maybe he could explore the role of Joseph Mifsud – a Maltese professor and self-professed member of the Clinton Foundation, who reportedly seeded Papadopoulos with the rumor that Russia had “dirt” on Hillary Clinton. 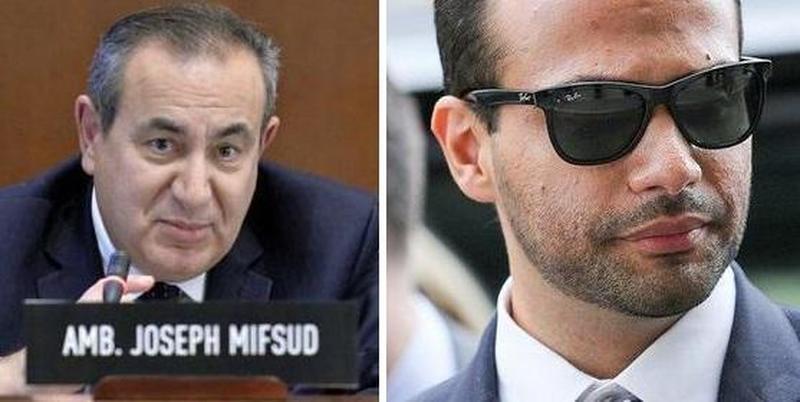 It doesn’t take a rocket scientist to conclude that Mifsud seeded the information with Papadopoulos, who was pumped for that same information during a “drunken” encounter at a London Bar with Clinton-associate and Australian diplomat Alexander Downer – who told authorities about the “dirt” rumor, which launched the FBI/DOJ counterintelligence operation that included Halper and “Azra Turk” spying on Papadopoulos.

Mr. Barr again defended his use of the term “spying” at a Senate Judiciary Committee hearing on Wednesday, saying he wanted to know more about the F.B.I.’s investigative efforts during 2016 and explained that the early inquiry likely went beyond the use of an informant and a court-authorized wiretap of a former Trump campaign adviser, Carter Page, who had interacted with a Russian intelligence officer. –New York Times

“Many people seem to assume that the only intelligence collection that occurred was a single confidential informant,” and the warrant to surveil Carter Page, said Barr. “I would like to find out whether that is in fact true. It strikes me as a fairly anemic effort if that was the counterintelligence effort designed to stop the threat as it’s being represented.”

Nice hedge, Barr, but what happened appears to be anything but “fairly anemic.”

Dear Democrats: The American people aren’t stupid, they know what spying is and no amount of gaslighting will change the fact that the Obama Administration spied on my father’s campaign.

Now we know why the Colonel Sanders Congressional Clown College is gunning for Barr, to preclude his going after their own nearest and dearest dirty trick collaborators.

“See? Obama did all that was needed to prevent a Russian-controlled Nazi Communist from taking the White House. Obama is very strong and will do everything to protect our democracy. We need to listen to him when he tells us to vote for Clinton in 2020!”
— The mainstream media

Remember, these are all people that have covered up for the real inside perps of 9.11 for (too) many years. That is, unless you believe radical Islam prayers are so powerful that they can bring down three towers with two planes and there was no inside help.

Just reading all the headlines – just about all my headaches can take, about Russia-gate, the lying, the backstabbing, etc. makes me want to take a shower every time as I feel totally soiled. Not even the wildest animals behave like this. How pathetic, how demeaning, how insulting, how offensive.