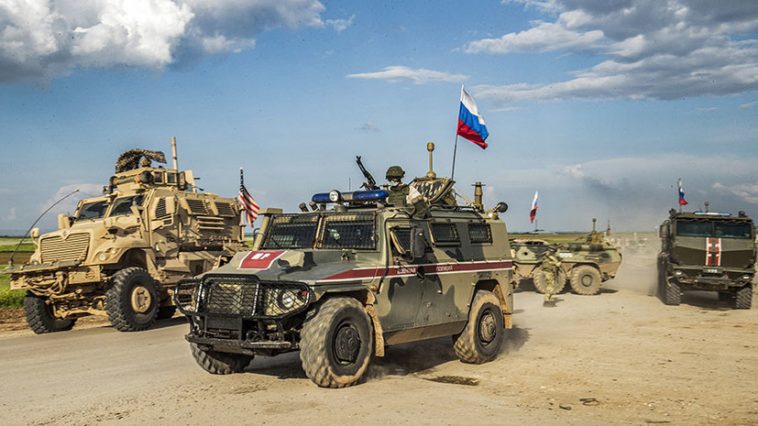 Wednesday’s collision between the US military occupying the northeast of Syria, and the Russian military legally present there, showcases the drama unfolding, as the occupiers are being handed a cue: “Yankee Go Home”.

Sheiks and elders of the Arab Al-Uqaydat tribe met at Deir Ez Zor, Syria on August 11 and gave the US occupation force, and the SDF, one month to “leave the Arab region to the Arabs”.

US and Russian military vehicle crash

The incident occurred around 10 am. Syrian time, on August 26 on a road near Dayrick in northeast Syria. Numerous videos appeared on social media which capture the encounter between two military vehicles.

In the video, a Russian Typhoon-K MRAPs collides with the front of a US M-ATV, after which the American driver honked his horn. Afterward, the Russian vehicles chased the American vehicles, who turned and left the area in a de-escalation maneuver. Four US troops were diagnosed with mild concussion-like symptoms, which resulted from the impact.

The Russian military explained that their convoy was on a routine patrol of the area and that they had warned the US vehicles of their position and had asked them to back-off. However, the Americans did not heed the warning, and the situation escalated.

National Security Council spokesman John Ullyot confirmed the details of the incident. “Unsafe and unprofessional actions like this represent a breach of de-confliction protocols, committed to by the United States and Russia in December 2019,” Ullyot said. “The Coalition and the United States do not seek escalation with any national military forces, but US forces always retain the inherent right and obligation to defend themselves from hostile acts.”

This flare-up is the latest in a series of events beginning in February, next in June, then in July, and now in August.

“The encounters happen a few times each month and, thus far, have been resolved without escalation,” said OIR spokesman Army Col. Myles Caggins.

“With Russia, Coalition forces work to de-conflict our movements through pre-existing communication channels, in order to prevent unnecessary and unplanned military interactions, and to de-escalate between forces when necessary,” he added.

The US in Syria

The US military illegally entered and occupied Syria under the guise of fighting ISIS.  While the threat of ISIS was real, the Syrian Arab Army (SAR) and the Russian military were already fighting ISIS and were capable.  However, the US foreign policy on Syria prevented the US military from partnering with the existing forces on the ground, even though they consisted of hundreds of thousands of ground troops, aircraft, tanks, helicopters, and weapons of all types.  Instead, the Pentagon chose to develop an alliance with the Syrian Democratic Forces (SDF), which is a militia and is aligned with the YPG, who are part of the PKK, an internationally recognized terrorist group, has killed thousands in Turkey over four decades.

The US currently has about 600 troops illegally in northeast Syria and another 150 at the Al Tanf Garrison.

US President Trump ran on a 2016 campaign promise to bring home the troops from Syria, which he tried to fulfill in 2018, but his order met with criticism, and the resignation of Defense Secretary James Mattis.

After a phone call with Turkish President Recep Tayyip Erdogan in October 2019,  Trump ordered the withdrawal of US troops from the Turkish border.

Democrat and Republican lawmakers condemned Trump for abandoning the SDF, a Kurdish militia that had been the US ally in the fight against ISIS in Syria. The group received weapons, air, and ground support in the fight to defeat the ISIS. The US pulled back from the Turkish border in October 2019 which allowed the Turkish invasion, utilizing mainly Radical Islamic mercenaries who were a mixed-bag between Al Qaeda and former ISIS terrorists.

James Jeffrey, US special envoy said in 2018 that the Syrian Kurds’ future would be with Damascus. The State Department described the relationship with the SDF as “tactical, transactional and temporary.”

The Turkish occupation of Syria

The US State Department has criticized Turkey for hosting Hamas members, while Turkish President Recep Tayyip Erdogan accused the US of alliance with terrorists in Syria, such as the SDF.

Some in the Trump administration is very close to Ankara, and the US State Department under Pompeo has always preferred Syrian terrorist groups in Syria, who are fighting to topple the Syrian government alongside extreme Islamist groups, such as Jibhat al Nusra and ISIS, which Turkey favors.  To the US and Turkey, these blood-thirsty savages are just tools to be used for political gains.

Turkey regularly turns off water to northeastern Syria, causing hundreds of thousands to be without water, even though Covid-19 precautions require hand-washing.

On August 18, near Deir Ez Zor, Syria, a Russian Major General, and three Russian soldiers were killed when their convoy drove over an IED, on its way back from a humanitarian mission. Many have theorized it was the SDF who planted the IED.

If you can’t stand the heat, then get out of the kitchen

On August 20, Pres. Trump met with Iraq’s PM, and said the US is leaving Iraq “fairly rapidly” and making decisions on Syria “fairly soon.”  The Iraqi Parliament called for the total withdrawal of US troops.

A meeting of 5,000 Syrian tribal members in northeast Syria on August 11 demanded the US forces, and their SDF militia partners withdraw from occupation of the area after the SDF assassinated Sheikh Mutashar al-Hafil and his relative Dar Mihlef al-Khalaf, which provoked a wave of protests, and the call of “Yankee Go Home”.

“We are calling on the international coalition to transfer control over the province directly to its Arab population, respecting Syria’s territorial integrity, as well as the rights of Syrian citizens“, the tribal elder’s statement said.

The Syrian tribe demanded that the SDF release all prisoners and hostages, and especially women and children.

Hundreds of millions of people around the world want the US to go home and stay there. People threw rotten fruit and stones and much-deserved insults at US troops as they left Syria in armed vehicles. Hundreds of thousands of Iraqis gathered in Baghdad in January 2020 to demand that the US leave.

MAGA for a good percentage of the “rest of the world” outside the US means Make America Go Away.

You are so right about that meaning of MAGA ! Been watching America collapsing in on itself recently , plus with the US dollar losing value every day , it will not be long before the likes of Mexico and Canada will both start marking out new territory to make their countries much larger ! But its the ordinary folk of America that I feel for , they had nothing to do with their economy being fleeced by the Elites and the corrupt politicians , not to mention losing their jobs because of greedy factory owners taking their businesses to… Read more »

I concur.The empire is coming to a close,it is time to save the American Republic,rebuild its infrastructure and create jobs..

I think we have a good chance of suing the Russian government for whiplash, psychological trauma and PTSD. Pompeo assured me that he’s prepared to confiscate 4 Russian LNG tankers on the high seas to compensate those poor four soldiers that may never be able to tie their boots again or come within 5 miles of Brighten Beach without painful neck spasms and nightmares. What I can’t figure out though is how a Russian vehicle half the size of the American one is the one that came out unscathed. Has Elon Musk been experimenting with superchip navigational implants with their… Read more »

If anybody needed confirmation that the UN is completely udner the control of the US, one need look no further than Syria where they are interfering, arming terrorists to overthrow the legitimate government and causing mayhem. The sooner the US gets its sorry butt back home, the more peaceful the world will be.

I love Americans but the lads need to go home,the leaders of the empire are completely “nuts”,there are conspiracies about Zionist plots to distablise the region and neuter Israel’s enemies,this I cannot Not confirm but these beliefs abound on right_wing websites and blogs,but yes our American friends need to withdraw from Syria,they are harming the region and even endangering alllies in Europe with the flood of refugees that are hurting social cohesion,so yes go home.. 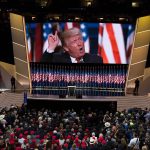 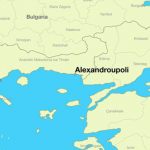