If you’ve ever wondered why the media narrative on race is so at odds with reality, there are reasons for this. The short explanation is hysteria driven by people who are red rather than black. And it goes back a long way on both sides of the Atlantic.

On April 10, 1986, the London Times carried a strange report. The Press Council (as it then was) had upheld a complaint made by a Daily Telegraph reader over the reporting of a rape trial.

Three masked men had forced their way into a private London dwelling and one of them had raped the female occupant in front of her husband, who had then been forced to have sex with her himself. One of the home invaders had received a 12 year sentence, which was surely very lenient for a rape with so many aggravating features. The Daily Telegraph had reported that the perpetrators were black, and, believe it or not, the Press Council had ruled that “newspaper references to race or colour are objectionable where they are both irrelevant to the story or article and in a prejudicial context.”

Curiously, or maybe not so, when the boot is on the other foot, the race of the perpetrator always seems to be relevant. In the UK, this hysteria and the taboo around any crime with a racial element led to the grooming gang scandal in which hundreds of underage white girls were systematically abused by at times dozens of men. The idiot Tommy Robinson alludes to these men as Moslems, but the senior Labour politician Jack Straw hit the nail on the head when he said there were some men “of Pakistani heritage” who regarded young white girls as “easy meat”.

The United States has a much larger population than Britain, including minorities; the minority that always gets the most attention are its blacks, especially where crime is concerned. For years, Colin Flaherty was the only journalist who reported on this phenomenon in detail. Because he is white, he has of course been smeared from pillar to post. The YouTuber AK Nation is black, so isn’t so easy to smear; he has been mentioned here before, but it is only when you study his videos and listen to his rational arguments you realise just how special this guy is.

Crime, especially gun crime, is at epidemic levels in what he calls Blakistan. The usual excuses of poverty and despair are pathetic. This is a drive-by shooting caught on camera. How many people stricken by poverty can afford to run a car?

While black on white and black on Asian crime are, in the words of Colin Flaherty, wildly out of proportion, as AK points out, there is a large criminal, indeed gangster element in the inner cities, and most of their victims are black. Criminal justice reform, so-called, makes a bad situation worse, he says, and the most outrageous aspects of this “reform” are so-called progressive district attorneys who refuse to prosecute even rock solid cases involving serious crimes. The rationale behind this is that there are too many “people of color” – read black men, in prison. A “disproportionate number” as that tiresome saying goes. So their solution is to free black criminals until this purported disproportionality has been redressed? It would appear so.

On August 15, the 7 year old Chicago resident Serenity Broughton was hit and killed by a stray bullet in a Wild West type shoot-out that was rooted in an argument on social media. Her sister was also hit and seriously wounded. According to AK, an enormous number of shootings result from something as ludicrous as this. A suspect was arrested but released when the Cook County district attorney refused to charge him. The name of that district attorney is Kim Foxx, the same DA who tried to give a free pass to hate crime hoaxer Jussie Smollett.

Her behaviour in this case was so outrageous that even Chicago’s lunatic mayor Lori Lightfoot took Foxx to task. The same suspect was rearrested last week.

AK Nation is currently posting two videos a day to his main YouTube channel as well as holding twice weekly live hangouts. If you want to understand the madness happening in America’s inner cities, you need to listen to this guy. So do politicians.

Why are we surprised at this madness.”Covid” anybody! 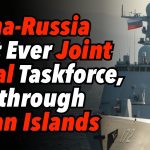