Zimbabwe is once again facing rampant inflation, a rate of almost 100 percent recorded in the month of May.

I felt the need to investigate its macros. As usual, the graphs are based on info from tradingeconomcis. An important development is that last month, the Government removed the legal tender status of foreign currencies and made the new Zimbabwean Dollar [RTGS] the sole legal tender.

The country dropped its national currency back in 2009, and replaced it with a multi [foreign] currency system in efforts to combat hyperinflation at the time. The recent reverse measure, taken by Emmerson Mnangagwa’s administration, comes in response to dire commodity shortages across the country. Mnangagwa replaced Robert Mugabe as president two years ago in a coup. However, without sufficient US dollars to pay for imports, the country’s fuel stations have frequently run out and gasoline prices more than doubled between the months of January and April.

Fuel going up, coupled with the currency’s depreciation, made the cost of food, transportation, and housing utilities to soar. Due to the lack of confidence, as expected, more and more vendors set prices in US dollars.

In a milestone deal with the IMF last month, the Government agreed to cease net money creation [deficit spending] in order to pay its bills, which was a root cause of the sudden hyperinflation. The IMF is monitoring economic reforms for a year under a mutually agreed program. Debt relief was promised at the end of this year, provided the Government respects the deal. Companies are meant to trade RTGS dollars on an official market, but there were few takers. Analysts said that the Government’s gamble to force greater adoption of the RTGS might very well backfire, pushing transactions in foreign currencies underground.

With all these developments in mind, let’s see Zimbabwe’s flow of funds, and later on we’ll look at other indicators. The country has been a net exporter of Aggregate Demand and a net importer of goods for ten years straight. The Domestic Private sector [composed of domestic firms and households] has been going severely into debt for those same ten years. Only in the last two years was it able to net save financial assets, when the Government seriously expanded fiscal deficit spending.

We also see how the country’s money supply shot up, especially in 2018 and 2019. The M2 measurement [which includes cash and checking deposits + savings deposits, money market securities, mutual funds, and other time deposits] reached an all time high of 10.55 billion US dollars last March.

The unemployment figure has remained stable throughout years, but I don’t put much faith in the accuracy of this data, simply because of how the State defines being unemployed. For example, people like subsistence farmers, who consume all of their own output, are categorized as employed. And more to the point, the graph below is based on the “strict unemployed” definition [one who has been without work, is available for work and is actively seeking work]. The broader definition doesn’t require the latter condition.

Those working in the grey [informal] economy include people who do unpaid labor for a family business or paid employees who are not entitled to sick leave or paid holidays. In Zimbabwe, there are a great many who work in these circumstances. If we count as employed those workers on a payroll with taxes deducted at source and pension coverage, then the unemployment estimate is huge.

On to trade. South Africa owns the largest share of Zimbabwe’s exports. In my opinion, the country is far too dependent on its southern neighbor for commerce, and South Africa’s socio-political stability looks bleak these days. It would be better to seek out markets in different countries, in order to minimize risk and better handle potential negative demand shocks [for Zimbabwean exports] and negative supply shocks [for Zimbabwean imports].

The graph below shows Zimbabwe’s exports by countries of destination. 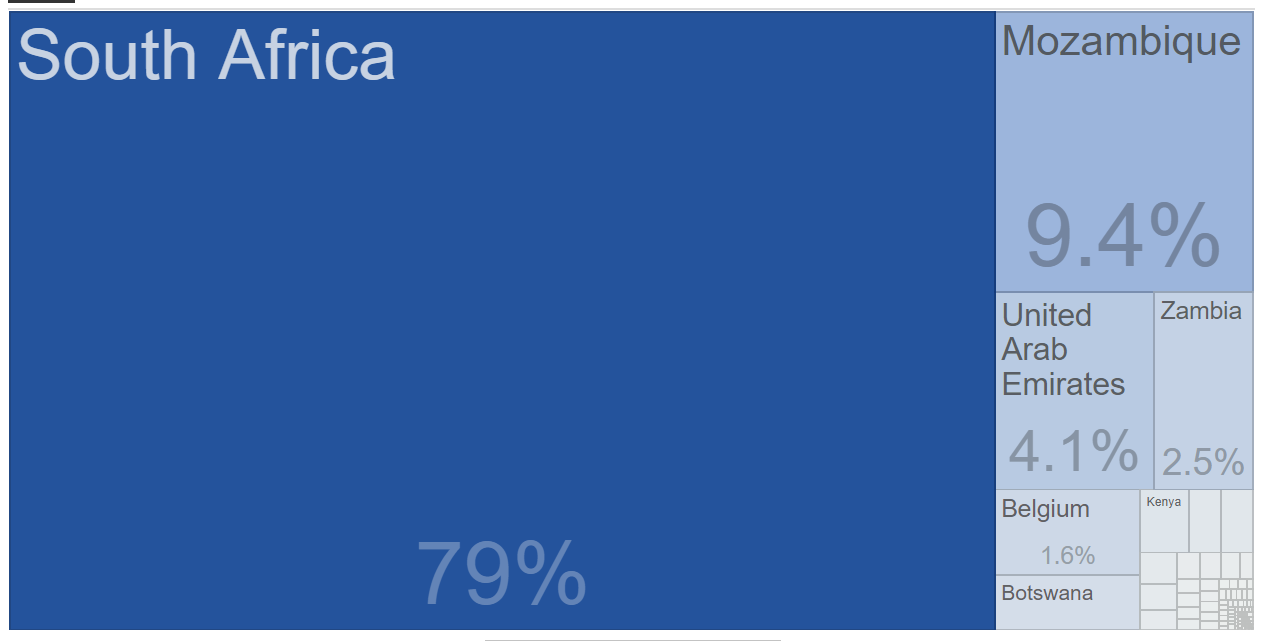 The graph below shows Zimbabwe’s imports by countries of source.

According to the World Bank, Zimbabwe’s exports sector as percentage of GDP last year was 22.9 percent and its imports sector 25.5 percent.

It’s safe to say that strategic bilateral relations cannot be formed, so long as Zimbabwe’s political class doesn’t compromise on a certain vector the country needs to maintain long term. Foreign investors [state and private agents] won’t be willing to come in, if they believe their investments will be at risk at the next election cycle, or if the chances for political instability and social upheaval are high. In recent years, Russia has been paying more attention to Africa, the northern states in particular, investing mostly in oil rigs and nuclear power plant deals. That’s one potential partner state with which the Mnangagwa administration should seek to do business.

Going back to Zimbabwe’s main trade partner, South Africa… that country is experiencing serious problems in rising criminality, and Ramaphosa’s land reform [confiscation without compensation] is bound to fail. In South Africa, since 1994, 21 percent of farms were put into Black African ownership. But more than 80 percent of those farms failed to remain economically active. If you ask Black farmers the reason for that miserable success rate, they blame the Government, and that’s absolutely true. That’s how you know it was a simulation of reform and not a legit effort behind it; because a singular reform, in and of itself, can’t be successful when everything else remains the same. In order to be a commercial success, an agribusiness requires access to infrastructure, to financial and physical capital, crop insurance, skilled labor, competent management, and access to markets capable of absorbing its output at a price which covers operation costs plus the markup.

South Africa [and Zimbabwe] needs a holistic approach to its national problems, and that means a combination of measures. Changing ownership doesn’t fix anything. The goal should be to decommodify land, which can be done via nationalization or [my personal preference] through site value taxation. Complementary measures should include: community land trusts, community banking, a national infrastructure investment plan, a national health care and education service, a national trade strategy, and last but not least, asset-side reform of the financial sector.

Reducing bureaucracy should be a priority as well. Currently, Zimbabwe is ranked 155th in 190 countries in the category of ‘ease of doing business.’ The more complex the laws and regulations are, the more wasteful and corrupt the system is. The State-dirigist method and Single Tax philosophy don’t require more time spent between citizen and bureaucrat, quite the opposite!

After Mugabe’s land reform, Zimbabwe isn’t out of the woods, and its population is growing too.

Using the printing press without any regard to budgetary rules, without any clear goal in mind, will only make the situation worse. The Zimbabwean Dollar [RTGS], in order to appreciate in value, requires a combination of tighter supply and higher demand for it. The Government’s specialists need to determine the country’s potential output vis-a-vis actual output and adjust fiscal policy in consequence. A negative output gap occurs when actual output is less than what the economy can produce at full capacity – while a positive output gap is the reverse and is inflationary.

The Government should aim for a near zero fiscal deficit; should temporarily ban the importation of luxury items, at least for a few years if not several years; should prioritize the importation of vital commodities – fuel, water, pharmaceuticals, grain, milk, and the like. The Central Bank should be ordered to run permanent zero interest rate policy. Reduced interest payments into the economy means a smaller supply of Zimbabwean currency. And the Government should only accept RTGS in payment of its exports, and it should only guarantee bank deposits denominated in RTGS. This combo would be sufficient to halt inflation, bring price stability and political confidence in state institutions and fuel hope for a better tomorrow.